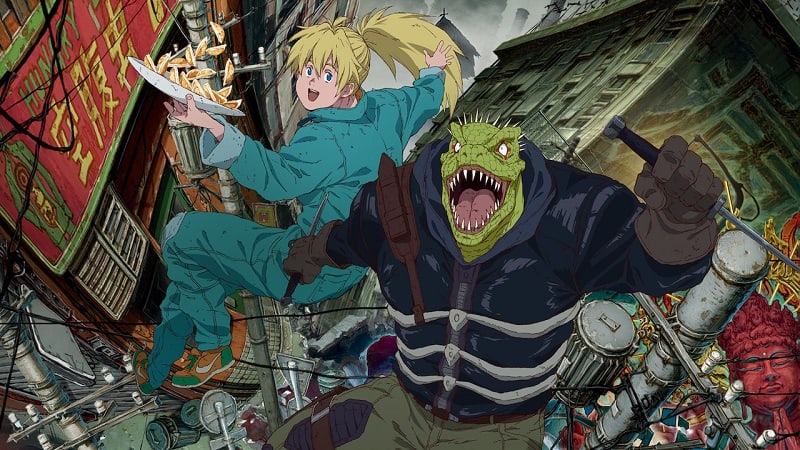 Dorohedoro filler list is a wildly crazy and scary series about a great crocodile guy who loves gyoza. It’s hard not to have fun while watching the Dorohedoro anime filler list.

It is one of the best anime series right from the opening moments. It begins when a big crocodile man shoves a magician’s head into his jaws.

Written and drawn by Q Hayashida, Dorohedoro is a Japanese manga series. It tells the story of Caiman, a reptilian-headed amnesiac.

He works with his friend Nikaido to regain his memories and live in a strange and violent world. The lead character of the manga and anime series is Kaiman or the Magician Killer.

He is a person born with immunity to magic in the Hole. He made it perfectly clear that “Kaiman” was not his real name. He was offered to him after he started suffering from amnesia by Nikaido.

His lizard head is the consequence of the curse of a Magic-User. His primary purpose is to locate the one who cursed him to turn him back.

But due to his amnesia, he can’t remember who cursed him. Kaiman resorts to clamping his mouth around the head of any Magic-User he meets.

Hole is a gloomy, decrepit, and disorderly zone where there are poor and dying prey. It is a training ground for the magic users that dominate it, an area independent from law and ethics.

The magic users think of the inhabitants of Hole as little more than insects as a species occupying the highest rungs of their community.

Murdered, mutilated, and experimented without a second thought. It happens on a regular basis that the helpless Hole inhabitants clutter the corridors of Hole’s hospital.

With free access to and from the hellhole, the magic users seem indomitable to everyone. Apart from a handful of people who challenge their authority, everyone suffers.

Kaiman, more of a reptile than a man, is one such human. He hunts them with only a trustworthy pair of bayonets. His immunity to sorcery in a heedless search for answers.

Magic users are his only clue to returning his life to normal, cursed by his presence and tormented by nightmares.

With his biggest obstacle is his stomach. His greatest friend is his female partner, Nikaidou, who runs the Hungry Bug restaurant.

This anime is set in a gritty world of hellish nature. With death and carnage, Dorohedoro manages a balanced mix of comedy and dry humor.

It weaves a unique universe of unearthly origin and dull appearance. This is not for the people who get easily disturbed.

There are several twists and turns in the lives of Hole’s inhabitants. This makes Dorohedoro an anime series that is a must-watch.

If a scary anime fascinates your inner demons, then you will be spellbound with this anime filler list.