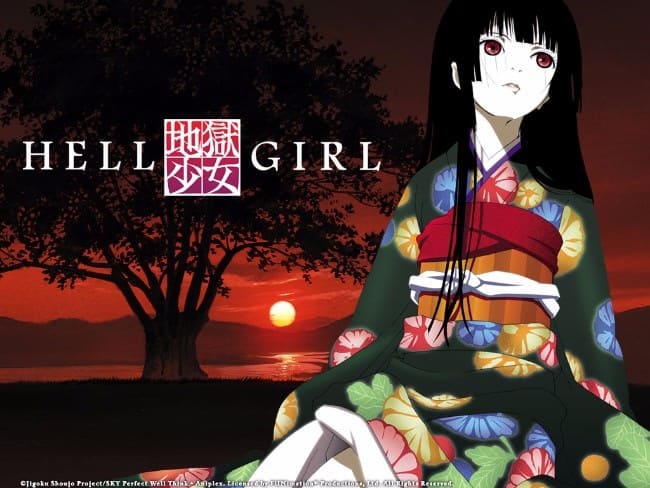 Hell Girl filler is one of the best Dark fantasy and supernatural thriller anime. This series ran from 2005 to 2017. 90 episodes of Hell Girl filler were broadcasted in total.

It is composed by Watanabe and Takahiro Omori. The characters were designed by Mariko Oka. The music was composed by Yasuharu Takanashi, Hiromi Mizutani, and Kenji Fujisawa.

The series focuses on the presence of a supernatural system. The system that enables people to take revenge. This is done by sending other people to hell with the help of the mysterious main character.

This is done also by her assistants who make this system work. The essence of human feelings is a common feature in the series. Along with revenge, cruelty and hate are also shown.

It has premiered throughout Japan. This is shown on various television channels, such as Animax, Tokyo MX, MBS, and others.

Each episode typically follows the format of a short story that is self-contained. It shows the introduction to the point that a person has suffered torture.

He uses the website for Hell. It’s correspondence and sends a request to get rid of the person. The Hell Girl, AI Enma, arrives and introduces a doll.

A doll with a red string on her neck which can send the named antagonist to hell. When the rope is cut, AI and her friends then threaten the antagonist.

They provide the ultimate chance to confess and send everyone to Hell. The price of the deal is to take a person’s life. The person making the offer might also have to go to Hell.

Hajime Shibata is a former reporter. He has resorted to taking scandalous pictures to blackmail people. There are rumors about the Hell Correspondence.

Websites are started to be investigated. His daughter, Tsugumi, is able to see Enma somehow. As the series continues, they become confused.

Confused over whether to interfere to save the individuals involved. A mysterious young girl from Hell Kikuri is introduced in the second season.

Kikuri can freely travel between the Earth and the realm of Twilight in which Enma exists. The story later revolves around Takuma Kurebayashi.

He is a boy who is suspected of disappearing around the city. This is actually caused by the townspeople using the “Hell Correspondence” website.

Kikuri continues to hire Enma’s assistants. This is in the third season. It includes a yōkai named Yamawaro. He takes an old offer from Enma to become her 4th assistant.