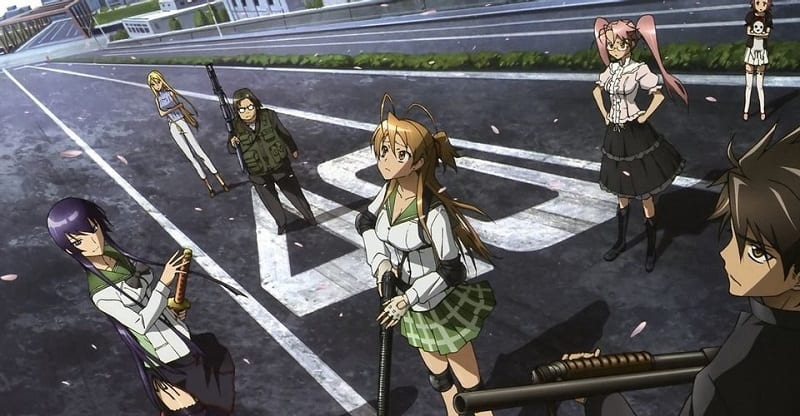 Highschool of the dead is one of the best action-horror anime. It is produced by Geneon Universal Entertainment.

The plot follows a group of students from high school. They are caught in the midst of a zombie outbreak. Something occurs unexpectedly.

The dead began to rise, and Japan was thrown into utter chaos. Takashi Kimuro is pressured to kill his best friend. He gets bitten and enters the ranks of the walking dead.

These creatures start terrorizing high school students. The girlfriend of the person he had just killed starts pledging to defend Rei Miyamoto.

They barely avoided the school’s trap of death. Only to be met by a world that had already collapsed.

Later, they discover what triggered this devastating pandemic. They were on a quest to locate their relatives.

Takashi and Rei team up with other students. They’re joined by Saeko Busujima. He is the stunning Kendo Club president. Kouta Hirano is an otaku with a gun.

Saya Takagi is the daughter of a powerful politician. And Shizuka Marikawa is their hot school nurse.

But will these individuals’ collective power be sufficient to survive this zombie attack? To know about this, watch the High school of the dead series.