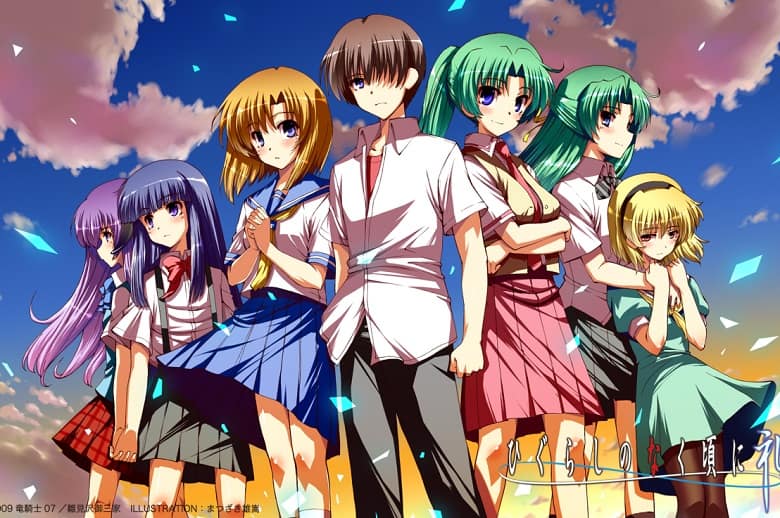 The series is based on a group of young friends. They live in Hinamizawa. A fictional rural village and the unusual events took place there in 1983.

A celebration to remember and give thanks to a regional deity of Oyashiro takes place. It takes place on the evening of the Watanagashi Festival.

Four people were murdered or disappeared. Keiichi Maebara tries to investigate the crimes in most stories. He or one of his friends become suspicious and commit crimes.

There’s something discovered in the Minagoroshi-hen and Matsuribayashi-hen. The chapter’s nurse Miyo Takano is accountable for a few of the past crimes.

She uses the Curse as a shield. The illness is observed in those who move a range from the “Infection Queen”.

It emits pollen that protects the condition of the villagers from worsening. Infected people slowly lose health. They ultimately kill themselves by cutting out their necks.

The Furude clan’s women have all served as Infection Queens. Rika is the only left representative of her family. She’s left alone after the demise of her parents.

In any case, Miyo kills Rika to unleash the infection. She vindicated the work of her adopted grandfather. He was insulted and shamed by the scientific world.

He was insulted for his research on the disease. Keiichi becomes informed of them in a number of flashbacks. The flashbacks after so many hundred loops.

Subconsciously recalls many of his past memories. It helps him to escape some crucial points. The different characters will be killed or driven crazy.

The circle of friends almost succeeds in outwitting Miyo. The group requests Hanyu to support them in the last stage. The spirit tries to create a physical body.

They try to stay alive long enough with her help to escape Miyo’s plan. This is to save Miyo and her father.

This is also to avoid their insane drive from developing. Hanyu moves back in time.