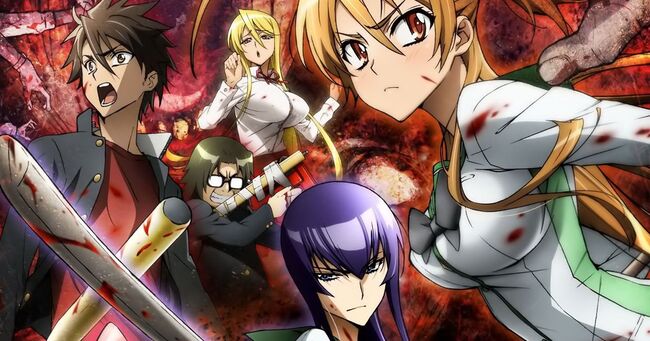 There is something about zombies that draws you in whether you are watching a movie, playing a video game, or watching anime.

Anime in this category is one of those that attracts a lot of fans since it encompasses every kind of genre you could imagine, such as funny, scary, creepy, adventurous, and most importantly action-related.

The following list contains the 10 best Zombie anime you can watch.

In comparison to Zombie anime, this one has a unique style. With an element of zombies, it is more on the sarcastic and comedic side. A dark comedy anime with a harem theme. The story revolves around Ayumu, who, following his murder by a serial killer, is resurrected by Reucliwood.

Aside from some serious secrets, the anime has a lot of funny moments. Ayumu is being chased by a demon named Megalos, and three others are helping him fight the demon and unravel the mystery behind his death. For those who desire something a little different without a lot of action, this would be a good choice.

Another non-stereotypical zombie anime with the premise that God exists. A world where humans are no longer able to reproduce and are incapable of dying regardless of any injury or decay is depicted in the anime. It is said that God abandoned all of his creatures but left them a gift in the shape of ‘Gravekeepers’ capable of resting the living dead.

Ai, a 12-year-old gravekeeper, takes us along on her journey. God abandoned the world she loves, so she is driven to save it. It contains secrets, romance, and drama in 12 episodes that will delight your eyes.

8. Kanberi of the Iron Fortress

There are a few similarities between the series and Attack on Titan where there are Kabane monsters instead of giant Titans and people in Iron Fortress are protected by incredible walls and fortress-like stations.

After the industrial revolution, a virus causes Humans to become Kabane, a type of undead Zombie creature whose heart is covered by a layer of iron; they can thus be incredibly difficult to eliminate.

In this post-apocalyptic scenario, a young inventor named Ikona creates an anti-kabane weapon. There are 12 episodes in the anime filled with excitement, action, and horror.

It’s a Chinese anime, but don’t let that fool you because this is an awesome action-adventure series filled with supernatural and black magic elements. The plot is centered around zombies and resurrection, but this one is not a Zombie Apocalypse, unlike some on the list.

I will not reveal the details of the story, but it is a tale about the death of Wei Wuxian but the subsequent resurrection in the body of Mo Xuanyu, who sacrificed himself to avenge his death. There are lots of action shots in this, as well as great animation and art style.

This is a video game-based anime, so we know there will be a lot of action in Gungrave. We follow Grave as he seeks revenge on his former best friend who betrayed and murdered him. In addition to action-packed scenes and slick animations, zombie battles are also featured in the game.

The plot of the anime is good and contains elements of friendship, treachery, and vengeance. The anime is recommended for those who are serious anime watchers and lovers

A tale of a resurrected cat wandering into the town is one of the many unique elements of this anime. There’s nothing cuter than the story of an adorable zombie cat in an anime about zombies.

Though it is a zombie, all the people love this cat. You should give this anime about the cute zombie cat a try if you want to have a nice pleasant time watching anime.

4. Highschool of the Dead

Action, carnage, and gunfights make this one of the best zombie anime. An outbreak of zombies has occurred leading to an apocalypse in modern-day Japan where the main characters of a high school try to survive.

In addition, the anime is rife with fanservice, but the action and thriller are incredible. There are 12 episodes in the anime, as well as some OVAs; a must-watch.

Compared to other Zombie anime, this one is a bit different. This anime is so cute that it might be hard to believe that it’s an anime about zombies. It deals with three girls who attend Megurigaoka High School: Yuki, Kurumi, and Yuri. Infected students and teachers of the school also become part of the zombie apocalypse spreading throughout the city.

There is also a survival element to the show, which may not be apparent at first glance. The genre of this anime would be horror and psychological thriller. The anime has 12 episodes and is quite enjoyable to watch.

The protagonist Makina is turned into a zombie princess armed with two Mac-11 SMGs in this thriller action anime. Her goal is to kill the other 108 Shikibane so that she can enter heaven.

She is provided assistance by a Buddhist monk with connections to an anti-zombie organization. By eliminating a particular group of Shikibane, she seeks to take revenge for the murder of a family. Throughout the 25 episodes, there are plenty of adventure and action scenes with some violent fight scenes. A captivating storyline also makes the anime a must-watch.

Tokyo Ghoul has either been classified in the Zombie category or not, but most anime fans can agree that this is one of the best shows featuring supernatural creatures or Demons. Ghouls are deadly creatures that survive by eating human flesh and live among humans in secret. Ghouls are extremely strong and can heal themselves.

After a brutal encounter with a ghoul, Kaneki Ken, a high school student, is also transformed into a half-ghoul. Probably only a few watches anime and are not familiar with Tokyo Ghoul, since the story is great, there’s action, and it’s intense. If you haven’t enjoyed this one already, you will love it.