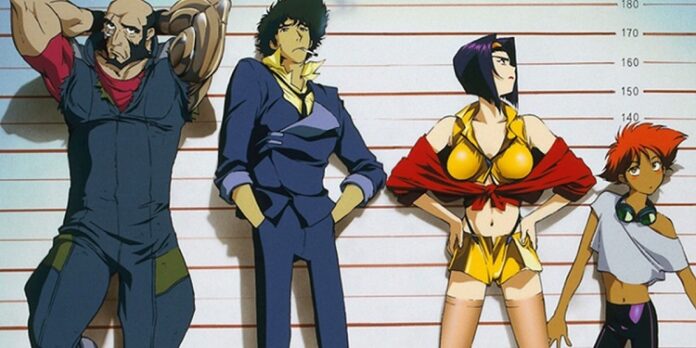 Any lovers of science fiction here? If you are a fan, then, there’s a very amazing and mind-blowing anime known as the Cowboy Bebob anime list.

You must watch this if you haven’t watched it yet, as Cowboy Bebob anime filler list is the best one in the world of sci-fi anime series.

The screenwriter is Keiko Nobumoto, the character designer is Toshihiro Kawamoto. The mechanical designer is Kimitoshi Yaman. The composer is Yoko Kanno.

The series follows the lives of a crew of bounty hunters traveling in their spacecraft called the Bebop. NIn the far future, Spike Spiegel is a bounty hunter with an easy-going attitude and some intense martial arts skills.

They go from place to place around the galaxy, along with their partners, Jet Black, and later Faye Valentine. They keep on searching for the high-priced escapees.

The accidental explosion of an experimental gate system enables hyperspace travel to severely damage the Moon in 2071.

This triggers the flow of a storm of meteorites and asteroids to bombard the planet Earth’s atmosphere. All this is responsible for wiping out a large part of the population.

New habitable systems: Mars, Venus, the asteroid belt, and the Jupiter satellites are colonized. The survivors are abandoned from the inhospitable earth.

By 2071, many of these planets, most notably Mars had stabilized and formed living civilizations. Mars is the new center of human society and has the technology of the Astral Gates.

As time passed by, politics, culture, and economics shifted. With no memories of the Earth, new generations grew up, and ethnic groups and nations gave way to planetary loyalties.

The economy also booms (similar to the economic productivity nations experienced after World War II) as these new societies develop.

However, this also increased the gap between rich and poor, and the planetary governments. The Inter-Solar System Police (ISSP) started to be affected by interplanetary criminal organizations.

A “bounty-reward system” was implemented close to that of the Old West in order to regulate the illegal activity.

Therefore, these new bounty hunters of the solar system were also referred to as “cowboys”. A combination of old and new technologies was the technology of the time.

Individuals could own cars or spaceships and if they had the woolongs, (their currency) they could freely travel the Solar System.

Cowboy Bebop is one of the few anime series that everyone should watch at least once in their lives. It’s not limited to one genre; it’s like it’s in a league of its own.