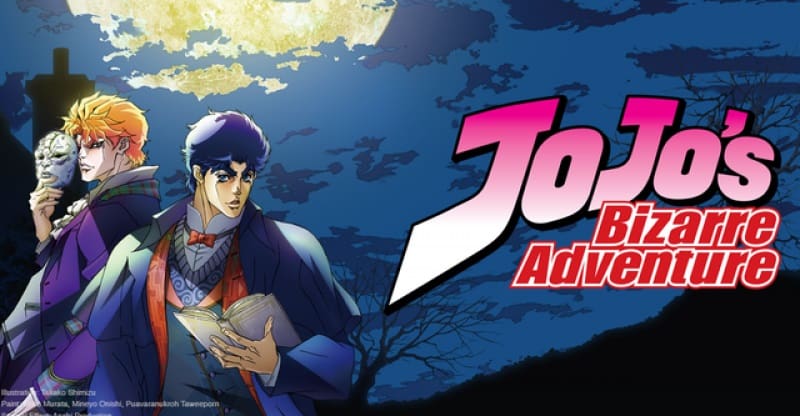 The Bizarre Adventure of JoJo is not one isolated tale, but several experiences that combine to create an epic saga. It is the story of the family of Joestar and their battle against evil passed down from one generation to the next.

The Joestars conquer all odds of overcoming injustice in the world. Whether it be a war against a vampire sibling, any ultimate beings from Aztec ruins, an army of assassins, a local assassin, the Italian mafia, or a prison chaplain.

Young aristocrat Jonathan Joestar finds himself locked in bitter competition with Dio Brando. He was a low-born boy whom Jonathan’s father took under his wing after the death of Dio’s father.

A fathomless drive of Dio finally leads him to question the mystical powers of ancient Aztec stone masks. Dio was discontent with his chance in life to rule over everything.

An artifact would forever alter the fate of Dio and Jonathan if the stone mask was taken in the possession of the Joestars.

Fifty years later, in New York City in 1938, the grandson of Jonathan, Joseph Joestar, must take on the mission of his grandfather.

They also must learn the skills required to break the mask of stone. Also, it’s incredibly powerful makers, the Pillar Men, who threaten the very life of humanity.

The story is divided into eight parts. The six of which form their own saga that specializes in the lives of the Joestar family and on the mysterious Stone Mask.

In the last two parts, the series undergoes a kind of Continuity for the following storylines. It is set in an Alternate World with much of the elements from the first six storylines.

The series is famous for its original and unique art style, complex plot, and exciting fights. It also has a large range of allusions. It includes characters named Speedwagon and Zeppeli, just to name a few.

The series did not have a complete anime adaptation for a long time. A series of OVAs based on Part 3 and the lost-to-history feature film adaptation of Part 1 has been released in the meantime.

The long-awaited anime adaptation created by David Production finally debuted to commemorate the manga’s 25th anniversary in 2012. This was written by Yasuko Kobayashi, adapting Part 1 and Part 2. An adaptation of Part 3 was followed up with the 2012 anime in 2014, with an adaptation of Part 4 in 2016, and Part 5 in 2018.