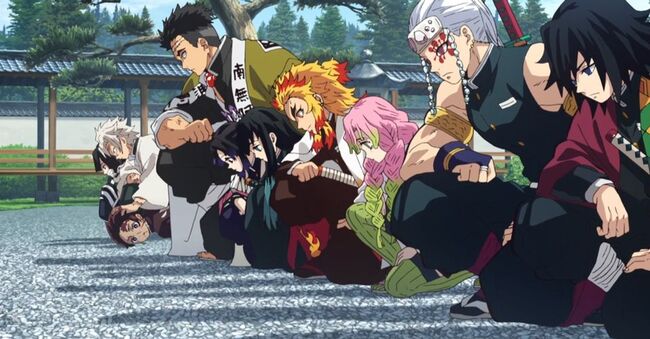 To create a lasting impact on the audience’s mind, the sector of animation needs to be aced and without a doubt, that’s what left an impressive impression on the audience of Kimetsu no Yaiba.

All the Demon Slayer’s mighty moves and steamy appearances arose from the good play of animation. We see the peaks of this in various fights and battle sequences. The fact that all the Demon Slayers were made of fierce metal cannot be ignored.

It was Tanjiro’s meticulous journey of becoming the strongest Demon Slayer but in the process, we were also introduced to many other slayers who were built with fine skills and strong passion, which ultimately made the show worth it. So, let’s just dive into the Ranking of the Top 10 Strongest Demon Slayers in Kimetsu no Yaiba.

Mitsuri, the Hashira who practiced a personalized breathing style called the Breath of Love, procured from the Breath of Flames. Matsuri was a ferocious fighter an amazingly sharp swrodsperson who displayed completely no forbearance while fighting against the enemy on the battlefield.

Interesting fact: Mitsuri has a unique skin type that is 8 times denser than any other normal person. Her extreme physical strength enabled her to throw forceful blows at her opponent. And as the Demon Slayer mark awoke, her skills intensified and gave her the power to stand against the Upper Moon.

The Demon Slayer with an ultimate superhuman level of physical skill, Kanao Tsuyuri. She was an apprentice under Shinobu Kocho. She one of the strongest Hashira for the Demon Slayer Corps.

Kanao practices the Flower Breathing style. She has two exceptionally wonderful abilities. One is her keen eyesight, which helps her predict the opponent’s move accurately. The second is her hold over the Total Concentration Breathing that helps her fight to her full potential.

In the Demon Slayer Corps, Obanai was the Serpent Hashira, one of the most solid swordsmen skills.

He is a person who possesses endurance and composure in a battle. Obanai awakened the Demon Slayer Mark during the battle against Muzan and with the awakening of the mark he automatically accessed better reflexes.

He also accessed the Transparent World shortly during the battle. As he was half-blind he developed a combat technique that reeled in his snake Kaburamaru.

Muichiro was young but not naive. His built was not tall but he possessed great strength. He practiced the Mist Breathing Technique as a Hashira.

Muichiro was able to give a tough fight to Tanjiro and after the awakening of the Demon Slayer Mark, he stood strong against and defeated Gyokko and Upper Moon 5.

Before his unfortunate end, he landed a mighty blow against Kokushibo, Upper Moon 1.similar to Tanjiro Muichiro was also able to access the Transparent World and wield the Crimson Red Nichirin Blade.

Kyojuro practiced the Breath of Flame. He possessed great levels of arms and hand strength along with unreal speed. He knew all forms of Breath of Flames and was a person of immense potential which was never fully explored because of his tragic fight against Akaza.

Even Akaza was able to notice Kyojuro’s potential and even proposed a deal to turn him into a demon but Kyojuro didn’t accept it. If not for that tragic fight Kyojuro would have been the first one to access the Transparent World.

Giyu practices the Breath of Water. With intense hard work, he was able to develop the 11th form of the Breath of Water. He was the Hashira to stand against Tanjiro. His powers were limitless and almost undefeatable which is proved by the incident when he kills Rui and Spider Demon Father.

While battling against Akaza, his Demon Slayer Mark awoke which gave enriched his skills amazingly. Along with Kyujur, Akaza also saw great potential in Giyu and offered him also to become a Demon.

The practicer of the Wind Breathing style is Hashira Sanemi. He has an excellent hold on the sword and possesses refined skills which impressed even Kokushibo.

There is one very unique thing about Sanemi, he has an intoxicating kind of blood that weakens any demon to lose concentration, like Kokushibo.

Gyomei practices the Breath of Sun and he is the Stone Hashira. Kokushiba at one point claimed that he had never fought against anyone matching the potential of Gyomei in the last 300 years.

Even without the mark, Gyomei was ab;e to equally fight against Kokushiba. He has an intense level of power through acing the Total Concentration technique, and he was also able to access the Transparent world. Gyomei’s reflexes were quick as lightning when fighting a battle against the opponent.

Tanjiro is the strongest Demon Slayer of his time. His transformation through the series was dynamic.

His powers of endurance, quick reflexes and a heightened sense of smell made him a great slayer. In the battle of Giyu and Akaza, Tanjiro was swift with his movement and outstood Akaza in speed which ultimately saved Giyu.

Tanjiro perfected his Sun Breathing technique before his fight against Muzan and accessed the 13th form of the technique.

The strongest Demon Slayer of all time. He is that Demon Slayer who was feared by the Demon King- Kibutsuji Muzan. Yoriichi was the most powerful master of the Breath of the Sun breathing style. Yoriichi was a prodigy that could defeat multiple demons in young age.

Yoriichi was the one who almost bought Muzan to face death and possessed immense speed and strangth.