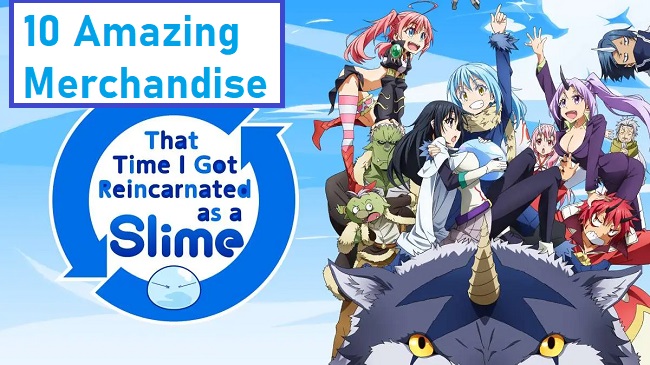 Rimuru Tempest is embedded in everyone’s hearts. We all remember him as that adorable little Slime that we saw on television creating havoc. We know all of us are eagerly waiting for the return of this cute creature, till that time get ready and grab you buckets.

We are here today with a tempting list of Top 10 Best That Time I Got Reincarnated As a Slime Merchandise. Trust me, you can never get enough of these merchandise. The more the character, the more the action figures. So, let’s go.

You can watch the show on Funimation.

10. That Time I Got Reincarnated as a Slime Rimuru Tempest Proplica Prop Replica

Always want Rimru by your side, we got you. Here is a 3 1/8-inch tall Rimuru Proplica. Push head with an added advantage, it talks! This proplica has been designed with over 100 dialogues of which you just can’t get enough.

This product is made with soft material to give the fans the feel of Rimuru’s soft and slimy texture. Another great characteristic of this Proplica is that you can hear the dialogues in two modes- Rimuru cute voice or wise Sage voice. Cool right?

9. That Time I Got Reincarnated as a Slime Rimuru Slime 11oz. Mug

Mugs are always useful and are even more attractive when the mug is decorated. This Rimuru Slime 11oz Mug is special not just because it has Rimuru Slime, it also has Rimuru changing in different forms all around the cup to decorate it. The mug also has the feel of soap dish bubbles, so it seems like self-cleansing. So, hurry up and grab that Rimuru mug.

8. That Time I Got Reincarnated as a Slime Rimuru Tempest Figuarts Mini Mini-Figure

You obviously think that Rimuru is cute and adorable, if you want to keep that sweet little figure with you, get your hands on the new Mini Rimuru Figure. In this Mini Figure you get those beautiful lashes of Rimuru with his sparkling eyes emitting that intense goal achieving look.

This mini figure is 3 and ½ inch and comes with Rimuru slime and a stand. This is a very worthwhile bargain as you get both the cute Rimuru with his pretty face and a little Slime on the side.

7. That Time I Got Reincarnated as a Slime Milim Vol. 6 Otherworlder Statue

Reflecting a delightful and sexy vibe is Milim. Her bubblegum pink hair, white socks, cute little skirt and burgundy wine boots is something we all love. So why would you not want a delightful 6 and ⅓ inch statue of Milim around you.

But don’t misinterpret the joyful and charming personality Milim has, she can be extremely violent against her enemies. She is a girl who likes to be the dominant one in a battle.

6. That Time I Got Reincarnated as a Slime Ranga Vol. 8 Otherworlder Statue

Ranga is an essential character in Rimuru’s story, and is shown as an intimidating character as he is the one to inherit the wolf pack. We were introduced to Ranga early in the show which made it almost impossible to think of Ranga as an important character in the plot. After being on Rimuru’s side, Ranga’s loyalty was unquestioned.

This 5 inch statue of Ranga has two enormous horns which represent his strength along with his humble nature.

5. That Time I Got Reincarnated as a Slime Souei Vol. 7 Otherworlder Statue

Souei is a character who is an epitome of calmness and composure. He is someone who would always pre-plan and analyze his attacks rather than just blindly jumping into the battlefield. He has a strong spirit beneath those dignified and gloomy eyes, a spirit that knows how to win a battle.

When Rimuru founded the Jura Tempest Federation, he announced Souei as the leader of the Shadow Squad. He was a man with gorgeous looks and a fearless personality who always carried two swords like a warrior.

4. That Time I Got Reincarnated as a Slime Shuna Espresto Statue

Who could have thought that Shanu would look pretty in a school uniform. This is an 8-inch statue in which Shanu pses tall and beautiful. She already looked stunning in her Ogre princess dress with bubblegum hair. But this school uniform is just another level.

3. That Time I Got Reincarnated as a Slime Shion Glossy Ver. Espresto Statue

This Shion Statue is an exact representation of Shion’s beauty. Her fair skin, long flowing hair. Even this statue is tall and gorgeous depicting the queen shine with a small touch of her fighting skills which we all know are unmatched.

Go on and buy this Shion statue and keep her close to you.

2. That Time I Got Reincarnated as a Slime Diablo Otherworlder Vol. 3 Statue

Diablo is a character with a strong and savage personality. His ruby red pupils, midnight sclerotic coat and golden color highlights on his hair makes him a character that everyone loves. His character is so suspicious that no one can even imagine what would be his next move or what he is planning to do.

The pose of the statue is so unique which shows that he is always ready to attack his enemies and still can be elegant. He has to have self control over his raging personality because after all he is a manservant.

1. That Time I Got Reincarnated as a Slime Veldora Tempest Statue – RePaint

Veldora Tempest is the purple color dragon who is an important character in the TenSura Slime series. In this series he became the first and dearest friend of Rimuru. Also, in this series the character has not only been shown as a mighty dragon but has played a role as a human.

His fans were astonished by seeing his character as a human in season 2 as his looks were fascinating. His statue as a dragon is 6 inches tall and marvellous.