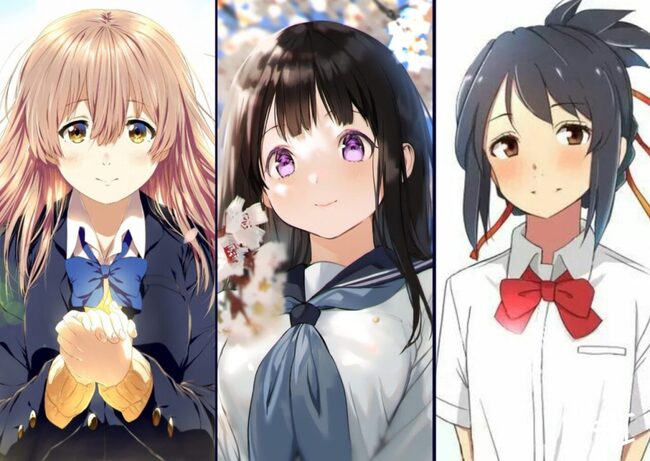 “Slice of life” is not a genre, it’s a warmth you feel after watching a show or anime, a feeling you want to experience beyond your own life, a feeling of being able to relate to, understanding, and enjoying the experiences of others.

Anime are especially good at showing moments that we can relate to every day but are also extremely special. Each of us is the protagonist of our own lives, but when we see it in the form of an anime or show, it feels different, intriguingly good.

There are numerous anime that touch upon different aspects of life and slice-of-life anime that just portrays normal people living normal lives and conquering their shortcomings, which we all have.

Whenever you’re feeling down this is the perfect anime to watch because it’s a great escape that will definitely make you feel better. Add these anime to your watchlist and watch them whenever you are feeling low or depressed.

You do not always get what you desire, especially when it’s about your first love. The saga of Takaki and Akar’s lives is tragic in the sense that they once loved each other immensely, but now distance has separated them.

Despite the distance between them, what remains are their memories of each other and the desire to once again meet. Unrequited love is the subject of this anime. The characters’ pain, as well as their chemistry, can be felt by the viewers.

9. The Girl Who Leapt Through Time

High school student Makoto Konno is just like the rest of us, unsure regarding what she should do with her future. But that will all change when she learns that she is capable of leaping through time.

What does she do then? To correct her mistakes, she goes back into the past, having no idea how terrible it can be to alter a timeline like that. Everything about this anime feels very authentic and real, it doesn’t have overly heightened emotions.

The message of this anime is profound: Time Waits for No One. Those who are looking for an anime that is deep, wholesome, and exciting must add this one to their watchlists.

8. Anohana: The Flower We Saw That Day

The reclusive Jinta Yadomi enjoys living at home and playing video games. Suddenly, everything turns upside down when the ghost of a close friend, who passed away in an accident years ago, appears to him to grant her last wish, which she can’t remember.

As a result, he reacquaints himself with his childhood friends with whom he had lost touch, as now they have grown up and parted ways.

The anime focuses heavily on the importance of being close to each other, as this group of friends was once close but now, they don’t communicate with each other. To help fulfil their friend’s last wish, they must all overcome their own flaws and obstacles.

In the highly competitive world of shogi, Rei Kiriyama is one of the few elites. His family and friends have placed immense pressure on him, so he moves into an apartment far from the people he knew in Tokyo, for his sanity.

However, all of this has left him lonely in his new place, and he has almost no friends there. Eventually, however, he meets Akari, Hinata, and Momo Kawamoto, with whom he experiences true friendship and the familial ties he longs for.

The story beautifully portrays how life may appear perfect on the surface, but in reality, is quite different. By the end of anime, you will form a bond with all of them and enjoy the dynamic bond of friendship that they share.

Love can be found in people you thought were enemies, your polar opposites. It is the same with Taiga and Ryuji. They are not the best of friends and don’t see each other eye to eye.

But they have crushes on the best friends of each other and think of hooking them up, but end up getting closer and falling in love with each other instead.

This top ‘slice of life’ anime ever created will definitely have you in tears by the end of it. You should definitely watch this anime as it will make you feel a lot of different emotions.

The Tatami Galaxy tells the story of Watashi, a college student in his third year who regrets everything he has ever done. His friend Ozu and he spent most of their college lives breaking up couples together.

After sharing his grievances at a ramen shop with a stranger, he is transported to the first year of college when he was just starting out. He now plans to make amends for his actions without having any further regret.

This is such a fun story and seems quite surreal at times. With all the fun and entertainment, this anime also teaches good life lessons and morals.

4. I want to eat your pancreas

Bookworm Haruki loves solitude and is completely detached from the world around him. A book titled ‘Living with Dying’ appears in his library.

He realizes that it is actually the diary of Sakura, one of his fellow classmates, who is terminally ill with a pancreatic infection. Her endurance and persistence make him stay with her for the next few months. Once Sakura and Azuma’s love grows and their bond grows stronger, it is then that Sakura must bid this world farewell.

Although this anime seems tragic, it’s about living happily despite knowing that your death is quite near. In the last few months of Sakura’s life, she wants to live happily and be content.

If it wasn’t for Sakura, Haruki would have missed out on the most memorable months of his life. Live life the way it was meant to be lived.

3. Your Lie in April

I consider Your Lie in April a musical masterpiece. Kosei Arima is a prodigal pianist who no longer plays the piano because it reminds him of his tragic past. He associates music with tragedy until he meets Kaori Miyazono, a musician herself.

The way she plays the violin with passion and freedom enchants him. Arima then learns that music is not a burden but a way of expressing yourself, a medium to communicate with others, from that day forward, unburdening himself from his griefs and tragedy.

If you are looking for a beautiful storyline with lovely music, then you should watch this anime.

This story follows two people whose souls exchange every time they have a dream. A small-town girl with a desire to live in Tokyo, Mitsuha, encounters a boy from Tokyo, Taki, who exchanges his soul for Mitsuha’s, and Mitsuha’s dream gets fulfilled.

Following a long period of time when Taki and Mitsuha don’t exchange their souls, Taki goes to meet Mitsuha in her hometown, only for something to be revealed that will melt your heart for sure and leave you feeling emotional. An enchanting story told in an unforgettable way; it’s bound to tug at your heartstrings.

Shouya Ishida, now an adult, is haunted by guilt over bullying a deaf classmate in his youth. To make amends, he meets the bullied girl Shouko for fun and sets out on a journey of redemption. During his journey, he also tries to connect with old classmates who were part of the bullying but singled out Shouya when the adults learned about the misdeed.

I find this to be a beautiful story about how our past deeds make us who we are now, and can make a huge impact on our present. Shouko was bullied by Shouya for no reason, he did it just for fun, which made Shouko’s life miserable, but Shouya only understands her suffering when he is cast out by his own friends.