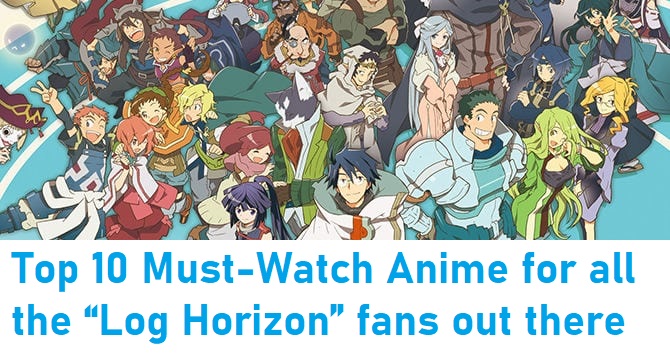 Log Horizon is the story of a virtual reality world where 30,000 Japanese players and numerous more players are trapped into an online fantasy game “Elder Tale.”

The protagonist is a boy named Shirobe who an introverted and socially uncomfortable. He pairs up with his old friend Naotsugu and an executioner named Akatsuki as they survive the virtual world together. At first what seemed like just a “sword game” is the “real world” now.

We are sure that all people who are Log Horizon fans love adventure, battles, and suspense. To feed you up with some more similar intriguing anime series, we have plotted a list of Top 10 Must-Watch Anime for all the “Log Horizon” fans.

In the world full of humans and demons in war and progressing like a snail, Hero the protagonist severs from his troop and head towards the Demon Queen’s Castle.

Hero possesses a unique Teleportation Magic that enables him to teleport through considerable distances. So, when Hero reaches the Demon Queen’s Castle, he discovers that she needs his help. She informs Hero that thousands of people will be left to starve if the war ends.

As the name suggests, Accel World takes you away from the shackles of reality to a virtual world where your potential and strength are examined.

The story is about a boy who is the vice president of the student council and he has been constantly losing all the high scores in an online game against Kuroyukihime.

One day, he is called to the student lounge where Kuroyukihime introduces him to a mysterious game called Brain Burst. This game program is designed to accelerate brain waves.

This story is about the world where Killing is the only chance to survive. Btooom!

Ryouta Sakamoto the acing Japanese player of the popular online game Btooom, suddenly realizes that he is standing abandoned on an island with no memory and just a green crystal embedded in his hand.

After a while, he understands that someone is has recreated the game to be a life and death game.

Sword Art Online is a story that revolves around the idea of calmness and cooperation.

The protagonist Kirito finds that in the game he is playing everyone is trapped together and cannot escape until they complete 100 levels.

Everyone in the game has to cooperate and work as a team to reach the exit because if anyone dies in the game they die in the real world as well!

GATE is the anime that prepares you to fight against a superficial invasion i.e., aliens entering the earth.

It is that time when supernatural creatures have invaded the earth, coming from the Ginza a gate-shaped Portal.

Youji Itami comes into the picture as a self-defense officer who save many lives in this invasion, whilst the rest of the force is striving to stop the invasion.

A few months after the invasion, Youji is made in charge of a special Recon team which had to befriend the locals around the “Special Region” to create a peaceful environment for the emperor to rule. But who knew, there would be a war.

Spice and Wolf is an anime that makes to wander through the blissful journey of a human and deity.

Holo is the protagonist of the anime, was a former powerful wolf deity who then decided to turn into a mere commoner. She then lays eyes on a traveling merchant Kraft Lawrence and puts before him an offer to be his business partner but on the condition that he would take her to Yoitsu.

After Lawrence analysis her and her unique potential of assessing people’s characters, he accepts her offer.

For a while now we have been talking about the unnatural world, but Grimgar is about realism.

The story is about a bunch of strangers put together in an unknown land with nothing to hold onto except names.

Having no other option than to join the army, all the people became soldiers of Grimgar to shield it from any danger.

We all wanna see Heroes, but Overlord here is the portrayal of a villain in the most optimum manner.

Momonga decides to spends his last few moments playing a game but he somehow gets stuck in the virtual world Yggdrasil, where he is what his character is. But in this world other players develop a personality of their own.

New beginnings are always a good option and King’s Avatar is here to prove it.

The story is created around Ye Xiu an ace player of an online multiplayer game Glory.

The situation is that he has been abandoned by the team and he starts working in a cafe. The twist comes when Glory launches its tenth server, he thinks of starting again from the beginning with the name “Lord Grim” and eventually, he captures the eye of all the other players because of his tremendous skills.

No Game, No Life is a siblings drama and their conquest to biome the best gamers in the world.

Sora and Shin are siblings who are obsessed with online gaming and always play with the extremely uncommon name ‘Blank’.

The story gets interesting when they are challenged for an online chess match through an unknown mail and then are dragged into Disboard by the God of Games. See what they do to become the best gamers of the world.