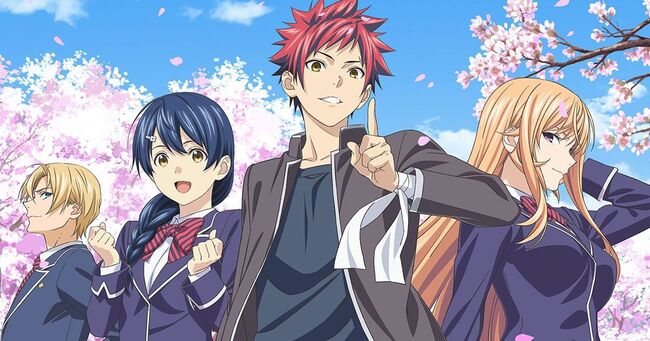 There is nothing more enjoyable than having a “foodgasm” when watching Food Wars. It will make you hungry and you will look at food in new ways.

Unlike other shows, Food Wars takes cooking to the next level by glamourizing it. It also discusses some deeper emotional themes, too, like how a person can become overburdened and distraught when they are overcommitted since childhood. Or how people project expectations onto them which sometimes result in their own natural talent being a bane for them.

Here is a list of the top 10 anime and manga like Food Wars if you are a foodie and enjoy Food Wars for the intense drama, the cooking contests, and of course, the food.

10. Restaurant to Another World

It is much more than a typical anime about food, and it is very interesting. You’d think that Restaurant Nekoya is just another western restaurant in Tokyo.

In contrast to other restaurants, this one is quite interesting. On Saturday when it is closed for humans, there are customers who do not even belong to this world. Dragons, elves, and fairies all dine in this restaurant. Isn’t that fascinating? It doesn’t lose the main theme, however, i.e., food.

With its own unique style, it celebrates food. Food Wars does not have the same kind of vibes as this anime show. It might be the only anime that combines three entirely distinct genres of anime- isekai, battle shonen, and cooking. There is also a cooking contest in it. The show is a mixture of fun and entertainment.

Wouldn’t it be cool to have a candy house in a candy world? If you feel the same then this anime will make your fantasy become reality.

Despite the lack of candy and chocolate land, there are hamburgers growing like trees, the landscape is covered in ice cream, all in all, the movie is set in an amazing and fascinating world. In this world, a variety of foods can be made from so many ingredients, but humans have not yet discovered them all.

Our main character is a passionate gourmet hunter named Toriko. Famously, he discovered 2% of all known ingredients. Despite this, the journey wasn’t easy. It is necessary to track down devils, monsters, and every single person whenever looking for ingredients.

It’s been compared to Food Wars because of its passion for food. Its love for food sets it apart from other anime.

Its exquisite depiction of food and ingredients will appeal to food lovers everywhere. You should watch this anime if you are a foodie and fancy adventure anime.

Even though the show doesn’t focus on cooking, its intensity and passion will make you think of Food Wars.

In contrast to Food Wars, this anime is about gambling, not adult gambling, but teenage gambling. Although it seems twisted, isn’t every anime?

You will be intrigued by the mind games and manipulations of all the characters in this anime, and wish you had that ability yourself, getting a strong adrenaline rush from these gambling battles.

You will be reminded of Food Wars’ characters and setting, a bunch of high school students who are enthusiastic about what they do and have fervent battles with each other.

A transfer student named Yumeko Jabani plays only for pleasure and not for money, and has an exciting and twisted gaming strategy that also amazes people in her high school class. The adrenaline rush and thrill alone make this an anime worth watching.

This anime feels more like the story of Soma’s father. The main character of this anime sets on a culinary tour of China to take over his mother’s position as a master chef in her restaurant as he learns more about various cooking styles and foods that are enjoyed throughout the vast country.

There are a lot of similarities between this anime and Food Wars, only the setting differs. On his journey, Mao makes many friends, just like Soma. Has a similar enthusiasm for food and aims to be the best cook and make the best food, just like Soma.

In contrast to Soma, he has to work hard in order to accomplish his goals. That’s not to depreciate the hard work of Soma, though, as he was quite capable already.

This classic anime will make you drool with its delicious cuisine; you will learn about the cuisine China has to offer. Aside from friendship and the hierarchy of chefs, you will also come to feel closely connected to this anime through its discussion of these themes. You should definitely check it out.

Food Wars was about several distinctive cuisines from around the world, but Yakitate!! Japan is just focused on one thing- Bread! In fact, there are a lot of breads that people love all over the world, but nobody thinks of Japan when they hear the word ‘bread’ and that is what our protagonist thinks as well

In discovering that he does indeed have ‘Hands of the Sun,’ which are ideal for kneading bread dough and giving him an edge when making bread, he prepares his bag and leaves for Tokyo to work in a restaurant chain named Pantasia.

As one thing I can say, this anime is responsible for stamping the label ‘foodgasm,’ because the post-bite expressions by the characters and the heightened explanation of how food is made make it very similar to Food Wars in that respect. You will definitely enjoy it if you are a fan of Food Wars.

Are you a fan of cakes? Would you like to see more baking and cakes on Food Wars? Have you ever wanted to show someone young what Food Wars was like but couldn’t because of its fanservice? It’s time to watch Yume-iro Patissiere if you answered yes to any one of these questions.

The main character, Ichigo Amano, has the same unique taste as Erina Nakiri and is able to identify the subtleties of flavor. For this reason, she is invited to attend the best culinary school, which is specialized in desserts- Saint Mary Academy.

Anime like this is dramatic, but cuter, and does not have much fanservice, and has a kawaii, appealing cast. Ichigo, unaware of her talent till now, is trying to be the best chef at school and that means beating the top competitor.

She is solely focused on it. It’s definitely worth your time to watch this anime.

This anime doesn’t revolve around cooking or culinary skills, it’s a fun thriller, so you might be wondering why it’s on this list? As far as presentation is concerned, this anime has a lot in common with Food Wars. The action-packed scenes in this anime are similar to those in Food Wars.

Clothing comes off in Food Wars as a symbol of ‘foodgasm,’ and the same thing occurs in Kill La Kill when people fight. It also features similar dramatic battles, and both anime were set in an academy of sorts. In both anime, there are also hierarchical systems in the academies.

The story is about Ryuuko Matoi, who is searching for the killer of her father.

After visiting Honnouji Academy on her search for the person, she gets into a fight with a member of the ‘Elite 4’ and after losing severely decides to confront the ‘Elite 4’ who might have been behind the murder of her father.

The show has thrill and drama that you won’t find anywhere else.

I don’t think this anime needs an introduction. In truth, this anime has nothing to do with cooking except that one of the main characters got burned because his mother spilled hot water on him. There is only one way in which this anime is similar to Food Wars.

Only one reason for this anime’s inclusion is that both anime have similar settings. In both stories, teenagers are taught special skills in high school. At the end of their school careers, both face battles that define their personalities.

Deku and Souma are both passionate about their goals and strive to be the best. Neither show neglects the dynamics of friendship among characters, including those who are not necessarily your friends.

Although Deku isn’t as gifted as Soma, he doesn’t let that hinder him from accomplishing what he wants. Morally, they are on the same page. You’re in for a treat in My Hero Academia if you liked the action sequences in Food Wars.

A top anime from the sports genre can’t be missed, can it? As you can see. In a sense, Food Wars can also be considered a sports genre, but the sport is cooking. Considering the way Food Wars is presented, with all its championships and tournaments, it could easily be an anime about sports.

If you’re wondering what makes volleyball so interesting, then you should watch Haikyuu. Regardless of whether you are into sports or not, this anime will provide viewers with a worthwhile experience.

You can’t possibly regret watching Haikyuu even the least bit, just like Food Wars. During a match, the tension, the intrigue, and the thinking all contribute to an exciting and thrilling anime experience.

Both of these anime have lengthy plot arcs and structures which make them more engaging and the viewers curious about what will happen next. You might enjoy this if you like a related vibe to Food Wars.

Do you ever wonder how food is made? Are there significant efforts involved in farming, growing crops, and raising cattle? Actually, this anime emphasizes food as well as this topic.

A good crop or a well-nourished animal can provide us with a great eating experience. What you cook matters as much as how you prepare it. Food Wars does not have the same vibe like this, but both animals display similar energy and passion.

Unlike Soma, Yuugo Hachiken is barely adept at farming. Not only is he unable to work long hours, but he also doesn’t understand animals well. In order to get away from his parents, he just enrolled in Ooezo Agriculture High School.

Additionally, it features many funny moments, like in Food Wars, and is light-hearted and amusing. In this story, an underdog is given a chance to succeed, and the anime captures the characters, plot, and story well.

One Piece’s Sanji is a world-renowned anime chef, and his inclusion in the original creators’ crossover with Food Wars was much anticipated.

According to me, these manga and anime series were the most similar to Food Wars. Cooking anime series such as Food Wars are some of the best. What are your thoughts on it? Let us know in the comments below.