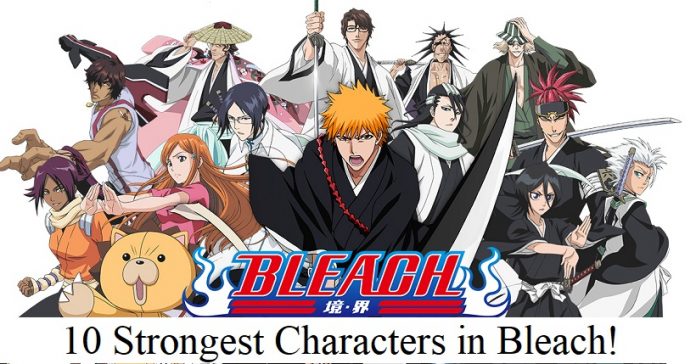 A part of the Holy tripartite is Bleach and the series is filled with strong characters and an amazing storyline. After careful consideration and analysis, we have been made a list of the Top 10 Strongest Characters in Bleach.

A powerful and mighty character in the series- Ichibei. He is the holder of the title of ‘Monk of Perception’ and commanding Shinigami of the Royal Guard.

He is also a master of the Hakuda combat style of fighting and also the Banshu Kanshu – power to perceive all creation.

Former Captain-Commander of the Gotei13 and current captain of the whole Gotei13 is Genryūsai Shigekuni Yamamoto.

He is the creator of a sword that can destroy anything and everything it touches.

The stamina he has is equal to what an entire army possesses and this comes from his powers.

He can also summon the burnt corpse of any dead dead person in the battle.

The youngest captain of the 10th division and a prodigy because of his natural skill – Toshiro Hitsugaya.

Hitsugaya has exceptional spiritual powers and crazy intuition while fighting in any battle. He also has the ability to control ice and water.

The thing he does is that he puts in creative methods into a fight while experimenting with his skills.

Gerard Valkyrie is the heart of the Soul King and the Yhwach’s imperial guard.

He is a violent character who has unimaginable spiritual powers, greater than the Captain-level Shinigami.

Gerard’s interesting ability” is of manifesting ‘Miracles’. This means that he has the power to give shape to feelings, desires and thoughts of him as well as others.

Hikone is in service to the Tsuyanashiro Family and is an artificial soul.

They are incredibly strong and possess the strength to defeat Sajo Sabaku. The thing that works in their favor in any battle is their abilities, Hollow and Quincy.

This makes them an immensely strong character in the series.

The most violent captain of the 11th division of Gotei 13 is Kenpachi.

Talking about his appearance, he wears an eye patch which helps him regulate his powers while fighting. He also has some knowledge and skill in Kendo.

The spiritual powers Kenpachi has are so vigorous that he requires an eye patch to control it.

Aizen is considered to be a God because of his powers and after he left the Soul Society.

You can say Sosuke is the master of all from swordsmanship to teleportation, everything! He also has the ability to stand or walk on air.

The protagonist of the show is Ichigo who is shown to have an immense spiritual ability that is natural-born. All the other powers he possesses are what he has achieved from his hard work.

He has been professionally trained in martial arts since his childhood.

Ichigo has enough strength to break open a man’s head with just one Kick, without even being in his Shinigami form.

The son of the Soul King is Yhwach. He is a man who believes in peace and ethics.

Yhwach is also someone who respects Justice and Honor.

Yhwach is an individual who has the power of Soul Distribution. His powers also allow him to reabsorb a part of the soul and share that part with others.

This makes him strong and he can also heal wounds by sharing the absorbed pieces of the souls of others.

The strongest character in the Bleach Universe is the ruler of the Soul Society – Soul King.

The Soul King resides in the Soul Castle and the Royal Guards protect him all the time. Both his son Yhwach and him possess “Precognition”.

Precognition is the ability to look into the future.

The Soul King is responsible only to manage the going in and going out, flow of the souls in the soul society.