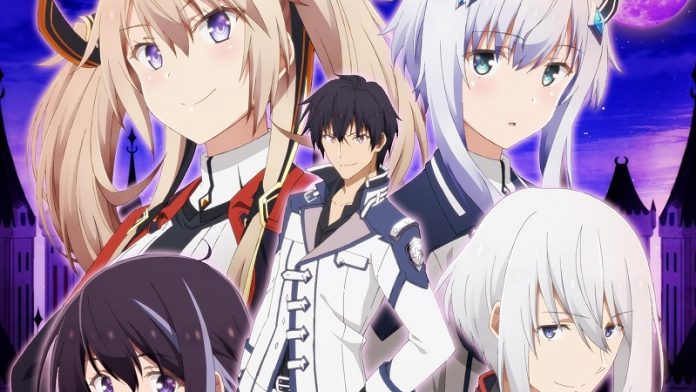 “The Misfit of Demon King Academy” is a series possessing some intensely strong characters and has a magical academy storyline. For the general anime fans, this series may seem like not such a good one.

However, there is so much the story is worth. The series has a little of the “Harry Potter” vibe because the premiered episode was set in a backdrop of owls, darkness, and castles. This is not a straightforward witch and wizard world, here the bad guys are the demons and the good ones or the ones trying to save themselves are of course humans.

So, we made a list of the Top 10 Strongest Characters of The Misfit of Demon King Academy!

The one who challenged and mocked Anos was Zepes Indu, but in in his defense he did not know that Anos’ was the demon king. He is the holder of a family of swords that have been inherited from many generations.

The magic he possesses helps him control the demon flames, also he is snob about his strength and the inheritance of demon swords.

Emilia Ludowell is the daughter of one of the “Seven Elder Demon Emperors” she always considered herself as a royal-pure blood. Her teaching position at the Hero Academy is because she manifests herself to be worthy of fire powers.

Her powers enable her to burn or collapse any of her targets.

Leorig Indu is the noble man whom Anos fought against immediately because his younger brother Zepes was defeated against Anos. Leorig is a proud royal who uses “Origin Magic” and displays hatred by his face.

When he first met Anos, he introduced himself as the head of his family and a “Demon Emperor”. He is a person who is full of confidence and some hints of arrogance.

The Child of God who existence is based on intangible concepts is Misa Iriologue. She was born because of the rumors and traditions which were spread all across the town.

If there were no gossips and meddling from the people there would have been no Misa.

She exists as a destruction of Anos the Demon King. Her abilities shown in the series are many and one of her ability is called the “Spirit Rain Mist” which enables her to transform rain droplets into human forms.

Misha maybe just a simple human-demon hybrid but she is the one who proved her destiny wrong by not letting her existence fade in the realm of physical strength.

She was created by her ancestor Ivis Necron as a vessel to Anos’ rejuvenated soul. Basically meaning that she was viewed and valued only as a tool.

However, there is more to her. When she was a young child she assisted Sasha to control and balance her powers, as she was the only one who could directly stare into Sasha’s deadly eyes. He spell casting ability is called the “Creative Architecture” which helps her creator barriers in battles.

We all have heard the phrase “If only looks could kill?”, Sasha the noble demon is the literal embodiment of this phrase as she is the “Demon Eyes of Destruction”.

Her magic ability is that anyone or anything that directly stares into her vibrant violet eyes would be immediately self-destructed, this means that the opponent actually is crushed to death.

Sash can also control the intensity of her magical powers as she is the “Witch of Destruction”.

The one who has been known as “ The Demon Sword Saint” since he was 5 years old is Hero Kanon. This happened when is enrolled into a sword dojo and was awarded with the title.

The demon swords he possesses empower him to fiercely fight any battle and especially because he has no magical powers. We also know that he participated in various competitions and was able to beat his dojo master at a very young age.

Shin Reglia is Demon King of Tyranny’s right-hand and is also the leader of a group in which is is known to be the mightiest demon sword man.

All his extreme weapons are demon swords which are capable of imposing curses through muting, blinding, and murdering the one to be cursed. The other swords he possesses are the ones that can absorb the spells used as attacks by his opponents.

It is pretty obvious that with these swords he is capable of showing authority over the “Unitary” demon group. This faction of demons aims to blend the mixed-blood with the ones with the royal blood.

An ancient magician who is renowned for his cunning mind and spell-casting abilities and for using them skillfully while in magical combat situations.

Two millennia ago Anos made Ivis utilizing his own blood so the skeletal image Ivis has is Anos Voldigoad’s responsibility.

Ivis is a member of the “Seven Elder Demon Emperors”. This group includes all those demons which have been created by Anos’ ancient magic.

Apart from this, he can also cast the “Separation and Fusion Reincarnation“, which is a method to develop a temporary place for the lost souls. This means that he is capable of creating vessels for souls to capture when it is time.

The strongest character of the whole series is Anos Voldigoad. Apart from being reincarnated as the “Demon King of Tyranny” after two millennia, he possesses an immense and overwhelming power through “Origin Magic Immunity”.

This means that he is immune to the spellcaster magic.

Anos is also the master of the “fusion spell”, the spell which the others took almost two millennials to learn and practice. Using his magic he can rejuvenate dead magicians as zombies. There are no second considerations when it comes to ranking Anos No.1.