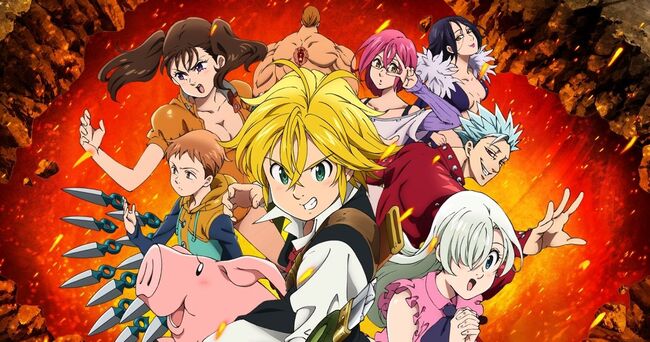 The manga of Seven Deadly Sins ended in the early months of 2020 and the long-drawn battle between the sins and the Demon King finally ended. In the duration of the war, all the sins powered up and became unmeasurably strong, especially after their return from Purgatory.

This list ranks all the Seven Deadly Sins in the order of weakest to strongest.

Disclaimer: The opinion of the reader may vary. This ranking contains spoilers.

Diane is also known as the Serpent’s Sin of Envy and is the unofficial “Giant Queen”.

She is a giant and during the New Holy War arc, her strength was acknowledged by the previous King of the Giant Clan, he then continued to declare her as his successor.

Being a giant and a sin she possesses incredible strength, speed and an extraordinary connection to nature. Her power levels increased even more after she performed the Drole’s dance.

The War Hammer Gideon is her sacred Treasure and she uses this weapon together with her natural power that is Creation. Creation allows her to manipulate earth into any shape or form.

She is one of the strongest characters in the series but when compared to the other sins, she falls short and therefore she is placed in 7th place.

Gowther, also known as the Goat’s Sin of Lust was revealed to be a doll created by his namesake, he also was a member of the Ten Commandments.

Being one of the Seven Deadly Sins and a doll created by one of the most powerful wizards in history, he has access to a great amount of magic power.

He possesses incredible strength and power and even though he has a frail body frame, his doll body grants him the power of pseudo-immortality meaning he can endure fatal attacks and survive.

Gowther, however, is not invulnerable to damage, as he can be hurt if the right amount of damage is inflicted on his body, enough to the point of breaking. This was shown in his encounter with Mael.

The Twin Bow Herritt is the sacred treasure he uses along with his innate power, Invasion. His primary power is the ability to manipulate people’s minds. His power places him 6th out of all the Deadly Sins.

5. The Boar’s Sin of Gluttony – Merlin

Merlin, also known as the Boar’s Sin of Gluttony is regarded as the greatest witch in Britannia. Despite lacking in physical prowess, her greatest strength lies in her wisdom, knowledge and intellect, in battle she uses strategies to render her opponents helpless without even engaging them directly.

This was seen in her fight against Chandler and Cusack, where she used strategy to weaken them and prevent any counterattacks simultaneously.

This approach brought defeat to both highly powerful demons in their original forms. Ludociel, the leader of the Four Archangels declared that ‘he never wanted to be Merlin’s enemy’. All her feats, strength and intellect make her the 5th strongest Seven Deadly Sin.

He is also known as the Grizzly’s Sin of Sloth but his real name is Fairy King Harlequin. He protects the Fairy King’s Forest and the Fairy Realm. He is extremely powerful as he is the reigning King and the most powerful Fairy King throughout history.

His power increased tenfold once he went through the trial and his wings finally grew. With the increase in power, he could freely access the Sacred Tree’s true power and his Sacred treasure.

This allowed him to overpower Mael with the Chastiefol and even use multiple forms simultaneously. His strength lies not physically but with his sacred treasure, the Spirit Spear Chastiefol and his high level of magic power. This ranks him 4th strongest out of the Seven Deadly Sins.

Ban is also known as the Fox’s Sin of Greed of the Seven Deadly Sins. His most famous power is Snatch and his immortality which he acquired from the Elixir of Life. He gave it up to revive Elaine from death.

His success in Purgatory evolved his body into being extraordinarily resilient and his ability grew. His body became so resilient that even after losing his immortality, he was entirely unharmed by the Demon King’s energy storm.

His power level makes him the third strongest of the Seven Deadly Sins.

Escanor is known as the “The Strongest Holy Knight” throughout the Kingdom of Liones. He holds the ability “Sunshine”, which makes him enormously powerful during the day and it increases till the high noon.

The downside to this power is that he is even weaker than an average human at night.

Even though he is the weakest among all the holy knights at midnight, he is the most powerful at noon as his power steadily increases from dawn. His power peaks at noon for one minute when he becomes power itself, this state of power is called The One.

This form makes his body dwarfs ordinary people and he is said to be invincible during this time. In his peak, as stated by Merlin, he easily surpasses any other Sins.

The biggest drawback is that he has time limitations and can be killed very easily at midnight. This unstable power makes him either the strongest or the weakest of the Sins.

1. The Dragon’s Sin of Wrath – Meliodas

Meliodas is the strongest of the Seven Deadly Sins and the captain of the group. He is also known as the Dragon’s Sin of Wrath, his sacred treasure is the Demon Sword Lostvayne and his inherent ability being the Full Counter.

He was the head of the Ten Commandments and also the eldest son of the Demon King.

He could easily defeat members of the legendary Ten Commandments with just a fraction of his power. His power is so great that it overshadows even the mighty Four Archangels.

He successfully absorbed all of the Ten Commandments and became the Demon King, raising his power to the same godly levels as his father and becoming almost invincible.

However, he sacrificed his power to cancel out the Commandments so that his father could never return and despite this, he is still the strongest out of the Seven Deadly Sins.