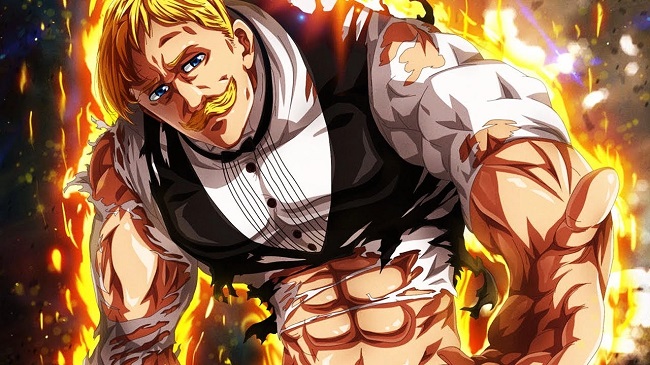 The sin of pride, Lion Escanor is known to be the strongest human alive. He is the seventh sin of the seven deadly sins and also the last one. His abilities were doubted by the fans at the start but he proved his strength after the memorable fight with Commandment of Love, Estarossa.

In the manga he was recently seen in a battle with Demon King in Zeldoris’s body, he did so by beating him into a pulp in his strongest form, The One, this battle took the last of his energy and left us to question whether he is still alive or not.

He died after he used the last ounce of his life force to boost up the grace “Sunshine”. His body disintegrated as he used this borrowed grace to help defeat the Demon King.

How did Escanor die?

Escanor had borrowed “sunshine” in his final fight with the demon king. This caused his body to disintegrate and as he defeated the demon king, he died as the grace returned to Mael.

In this arc, the demon king had taken over the body of his youngest son and brother of Meliodas. While Meliodas was capable of defeating him, he couldn’t bring himself to hurt his brother’s body. This is when the sins came to his rescue, Escanor arrived with them wanting to help.

He pleaded with Mael of the four archangels to let him borrow “sunshine” again knowing full well this might be his last. He was already slowly dying because of his extensive use of godly power and still took this step to help his friends.

They first engaged in hand-to-hand close combat but his The One power wasn’t enough to defeat a god. He used the last ounce of life force to charge up “Sunshine” and as the grace returned to his Mael. The Lion’s Sin of Pride died as he confessed his love to Boar’s Sin Merlin.

Who is Mael? The source of Escanor’s power

Mael is one of the four archangels and he is the younger brother of the head archangel Rudociel.

He is also the strongest archangel and he is the former wielder of the grace “Sunshine”.

How Strong Is Escanor?

“Sunshine” activates during the day and increases every second till noon. when it’s high noon, he becomes so strong his power can be compared to gods.

This is the state which is called The One and it only lasts for one minute. The one minute which the sun is in perfect position during the noon.

A mere hand chop which is known as Divine chop was strong enough to hold the strongest characters back.

His powers go beyond levels and he’s capable of feats like creating a small sun on his palm out of nothing, it was called the Cruel Sun.