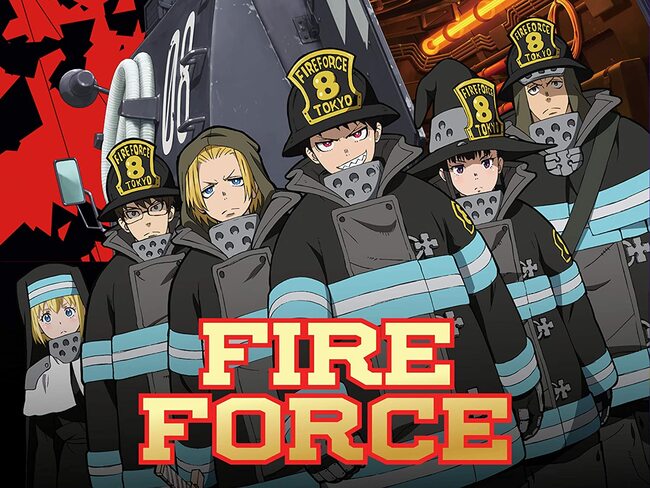 The Fire Force has set a strong foot back. Its intense and serious action sequences are excellently balanced with humor and weirdness. This series is now set to make things turn into a more interesting tone.

The coming episodes will be a display of characters fighting and evolving their ability. However, who is the strongest? Here is a list of the 10 Strongest characters in the Fire Force!

A Third Generation and a Skills Development Laboratory fighter at Haijima Industries is Kurono Yuichiro. He is also called Shinigami due to his dressing style and behavioral instincts.

Even though he is a powerful and confident individual himself, he is still mainly focused on the weaknesses others possess.

Kurono is an extremely powerful fighter but he still has no keen interest in lengthy battles against talented opponents, instead, he prefers to fight against weaker opponents.

He believes that an ideal world would look after the strong one and will overpower the weak ones.

Fourth Generation pyrokinetic and the Commander of Knights of the Ashen Flame is Sho Kusakabe.

Sho Kusakabe is Shinra Kusakabe’s younger brother, who was kidnapped by the White-Clad after Adolla Burst as a baby was awoken by him. After this, he became the Third Pillar.

Contradictory to his appearance, Sho is a cold person, who is emotionally distant and indifferent from his family relationships. As most of his lifetime was spent under Evangelist, Sho takes her only parent and also states that he has no memory of his mother.

Shinra Kusakabe belongs to the Third Generation and by the Grace extension also a Fourth Generation pyrokinetic. He is also a Fire Soldier under the Special Fire Force Company 8 and is the protagonist of the series.

He is the possessor of the Adolla Burst which automatically makes him The Fourth Pillar. Shinra has nervous laughter meaning whenever he laughs he innately grins or exhibits his teeth whenever he is nervous, angry, stressed, or agonized.

This condition of his developed after he saw his whole family die. Following the death of his mother and brother, he became a part of the Special Fire Force and saved people from the Spontaneous Human Combustion to become a hero.

A Third Generation pyrokinetic and a self-made antagonist that works as the guardian of the Fourth Pillar is Joker. Following his childhood abandonment, he was raised by Holy Sol’s Shadow which is an assassin group under the moniker of Five-Two.

After losing his left eye and experiencing an Adolla Link, Joker acquired an intense desire to know the truth of the world. Considering all the factors, Joker is a barbarous character, who takes pleasure in hurting other people and playing games with their feelings.

As a matter of fact, he is perfectly okay with insider trading for entertainment. Joker is a charismatic character and is a master of bringing people om his team.

The major antagonist of the series is Haumea. She is a White-Clad member and a Third Generation pyrokinetic. She is also the Second Pillar as she also possesses the Adolla Burst.

The initial picture portrayed of her is a calm and composed one, but soon enough Haumea reveals her true passionate and energetic self. Although Sho is parallel to her, she does not fear to treat Sho like a kid and she is a master at using her abilities for her personal gains.

Dragon is an extremely confident individual who has full faith in his abilities and asserts that anyone who stands in his way will be destroyed. This overconfidence makes him think that he is inhuman and identifies himself as a literal “Dragon”.

While fighting battles, we can clearly see his confidence and cunning battle strategies. One of his greatest strategies is to blind side the opponent into thinking that he is a Third Generation with his moves.

A Third Generation pyrokinetic and Captain of Special Fire Force Company 1. He is immensely respected by his team-mates and values all his people as he is always there to save any of them from any problem.

Considering the fighting part, Leonard overpowers his opponent with his immense strength and fast moves.

2. “The King of Destruction of Asakusa” Shinmon Benimaru

The strongest Fire Soldier and the greatest captain is Shinmon Benimaru. Captain of Company 7 and a hybrid of second and third-generation pyrokinetic. This hybrid traits allow him to emit flames and also control the flames with the use of some external source.

Benimaru is a short-tempered individual who prefers working alone or only with his brigade. Though he is an honest man but sometimes he can also come into fault.

Evangelist aka the Preacher, is the strongest character in the series Fore Force. Leader of White-Clad organization possessing enough powers to help her subjects win feats like Severed Universe and gain speed that way more than the speed of light.

Talking about appearance, she has two horns at her head which assist in that devil picture. She wears a symbol of the Sun God around her.

Evangelist is the one responsible for kidnapping children from the past 12 years and she test them to check whether they have the Adolla Burst.