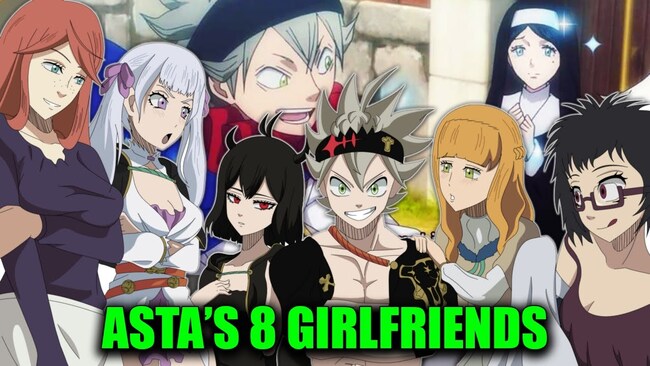 Asta is a very lively, helpful and hardworking protagonist, this is bound to get him a lot of female attention. Till now he hasn’t been involved in any romantic relationships but there are several suitors.

Asta hasn’t been to be in a romantic relationship yet, so even thinking about marriage is far away right now, but there are a few suitors for him in the show like Noelle, Rebecca, Mimosa and many more.

The only person he’s ever proposed to marry is Sister Lily, he is denied each time since she was one of the people who raised him. The one he’s most likely to marry is Noelle though, Noelle seems like a more guarded and arrogant person at first but she slowly warms up to Asta due to his kind nature.

They both are members of Knights Brigade so they have worked through dire situations together, they have come to depend and trust on each other. It is very easy to see them getting together in the future.

They have come from very different backgrounds and mindsets, which might become a hurdle in their relationship but they have come very far from when they first met. She was closed off to him due to her noble background but slowly it changed and they got comfortable with each other.

His positive nature and steady demeanor changed her perspective of him and warmed her towards him. Now they are the only two fellow members of the Black Bulls.

Asta is very serious about matters of the heart and was dedicated to Sister Lily.

Asta was oblivious to her love for him, only after defeating the eye of the midnight sun, he realised her feelings for him and still doesn’t understand them completely. She will probably have to spell it out for him to understand.

Asta is a very lively person and has a positive attitude which leads to a lot of girls liking him.

One of the prospective partners for Asta is Mimosa, she is a noblewoman who belongs to one of the Clover Kingdoms’ Royal families, Vermillion. She is a 5th class intermediate Magic Knight of the Golden Dawn and Royal Knights squads.

Mimosa is the first woman on the show to like Asta romantically. She first started to like Asta after the dungeon incident, they both overcame hardships together and Asta was vocal with his compliments on her abilities, which made her feel very happy.

Despite them having such a good relationship, he hasn’t expressed any romantic feelings towards her.

Kanoho and Asta share a very good relationship with each other. They first met when Black Bulls saved Kanohho, the stone and the temple from the Midnight Sun.

Even though they have short conversations they develop a close bond when she helps him during their battle against Vetto by using the last of her magic and strength to heal Asta.

He later repays her by inviting her and her brother, Kiato to the star awards festival and going out of his way to heal her throat using the bottle of Witch Queen’s magic. She later spends the whole festival hooked to Asta’s arm.

They have a deep connection even though it’s not clear if she has any romantic feelings for him.

Rebecca Scarlet happens to be Asta’s date when she participates in Black Bull’s blind date. They connect on the fact that they have had very similar lifestyles till now, having brothers and sisters, growing up without parents, but asta doesn’t have any romantic feelings for her.

Who will Asta end up with?

The person Asta is most probable to end up with despite his many suitors is Noelle. At first, she only saw him through her lens of prejudice and doubt but soon learned to look past it and romantically caring for Asta, she still denies it though.

It is a manga about the journey of Asta, a boy who seemingly is born with no magic, which is unusual in his world. He still dreams to become the Wizard King.

This manga was written and illustrated by Yuki Tabata and has been serialized in Weekly Shonen Jump since February 2015.