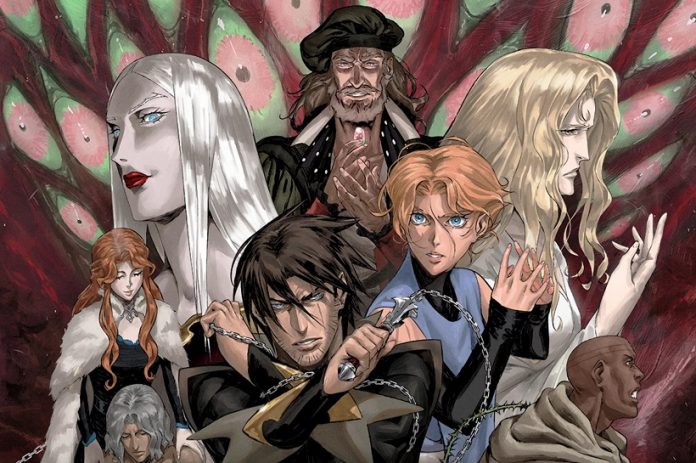 One of Netflix’s most-watched shows is Castlevania. The title of the series is similar to the name of the game.

The series is saturated with some incredible action scenes, fierce characters, and an extremely captivating plot, what is there to not like in it.

For all the Castlevania fans out there, there is a season 4 officially set to release in later 2021. In the end of the last season, we saw Alucard going back to his castle.

On the other hand, Trevor and Sypha were able to close the Infinite Corridor and also stop Dracula from returning. We also see Dracula’s child as the center of attraction and Alucard traversing through his powers.

There is so much going on in this series and it is so interesting that we made a list of  the 10 Strongest Characters in Castlevania!

In her youth days, Miranda served Isaac in his quest and now is an an old Devil Forgemaster.

She possesses the power to create and control all the creatures of the night using human corpse.

These creatures then do serve under her. This something Hector can also do, but Miranda is stronger and has magical abilities that intimidate Isaac.

Her mental endurance extend to great levels, such that she can resist the magician’s massive control spell.

However, yes due to growing age her powers are diminishing but it is said that in her peak time, she was ranked amongst the most powerful Devil Forgemaster.

Hector and Isaac together serve as the two human generals for the Dracula. As a Devil Forgemaster he is supposed to rejuvenate dead animals and human but in the form of a corpse.

These creatures then become monsters of his master’s army.

Individually, Hector is not such a great fighter but his leadership skills and ability to be in command of these partially dead creatures is amazing and frightening at the same same.

Cyclops was introduced in season 1 and from the very first scene he is established as a solid and tough character.

His weapons is an electric hammer and his eyes can shoot lasers. It is because of him that Sypha Belnades turned into stone.

Cyclop’s only weak spot is his head. We also see him protecting the Sypha statue, until of course Trevor defeated him.

Isaac is Devil Forgemaster and so is Hector.

Both of them are the two human generals of Lord Dracula. Dracula was the one who reduced Isaac from his barbaric master.

Isaac was truly grateful and joined the Dracula’s army to take revenge against mankind.

Apart from creating monsters, Isaac is incredibly skilled in combat. The proof of this is the scene where he butchered Godbrand even though godbrand is more powerful.

We see Lenore in Season 3 for the first time as a Styria Council of Sisters’ member.

She was a diplomat whose job to persuade Hector in creating these monsters for Styria’s use as well.

Once they both bonded, she gave a ring to Hector which instantly turned Hector to be Lenore’s slave.

Lenore is also a pro at hand-to-hand combat and apart from that she is innately strong.

Moreover, with this new army of vicious creatures, she becomes an even more dangerous enemy.

Queen of Styria and the leader of the Council of Sisters’- Carmilla. She is shows as a women who is able to seductively lure men into dangerous compromises.

Her traits such as intelligence, supernatural speed and physical strength make her an incredible powerful enemy.

Also, the combination of her vampiric nobility, her manipulation skills and her status can easily make Dracula’s servants question their side and loyalty.

This makes her capable of conquering over Dracula’s reign.

The thing that makes her even more dangerous is the fact that she still has to gain her true strength.

The protagonist of the Castlevania series and the last descendent of the Belmont family is Trevor.

Trevor left the estate after his family was killed and unfairly doomed. But he returned after a few years as a completely new and extremely powerful person.

He is a vampire hunter who has a proficiency in martial arts and also has an incredible physique.

These traits enabled him to survive through many dangerous situations and also made him capable to fight against Alucard.

Even though he possesses no magic, he plays an essential role in defeating Dracula.

The granddaughter of the Elder of the Speaker and an elemental sorceress is Sypha Belnades. Her magic is so powerful that she can manipulate literally any element and can create anything from scratch.

These powers helped her effortlessly defeat Dracula’s monsters and even burned one of his generals.

In the series, we see her creating ice shields and whirlwinds to push her enemies far away. The coming aesop, we will only see her more powerful and stronger than before.

Alucard has a vampiric heritage and has supernatural powers. He possesses immense strength, levitation, shape shifiting, speed and human empathy. These qualities make him a deadly opponent.

Alucard has a mastery over martial art through which he was able to land attacks on Dracula, fight Trevor with his exceptional swordsmanship and manipulate Sypha and Trevor to throw killing blows on his father.

We all know who deserves this spot- Dracula.

The strongest character in Castlevania and the major antagonist of the series is Dracula. He took a vow to take revenge over the whole world after his human wife was killed. To a point he was even successful in his plan.

He possesses unimaginable power, because till the very end we see that whatever the attack maybe, he always emerges alive and unharmed.

He has the best physique, vampiric powers and the strongest magic.

To even give a scratch to Dracula, Trevor Belmont, Sypha, and Alucard had to put in their everything. But Alucard was only able to kill him due to their family relations.