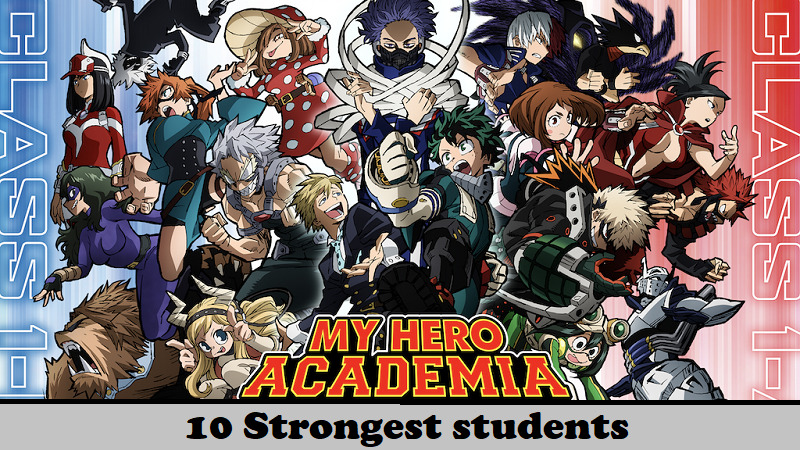 There is no doubt that U.A High School is the best hero school all over Japan in My Hero Academia. Midoriya is the protagonist whose idol is All Might and aspires to be like him by going to U.A.

But, after we have seen the entire series wew know that U.A is not the only school in the country which has young and talented heroes. Additionally, the Provisional Hero License Exam was the perfect way to get to know those new heroes.

New characters possessing unique new quirks and a chance to see which other students are qualified to beat the U.A. So, here is a list of the 10 Strongest students in My Hero Academia!

Mora is one of those forlorn and polite students. He is a second-year student of Shiketsu. Taking from his name, Mora’s quirk is the ‘Extend-o-Hair’. This quirk helps him control all the hair on his body and use it to catch numerous enemies simultaneously.

Similar to Class B’s Shiozaki, Mora’s quirk is also versatile. We see Mora in phase two, clearing out rubble for the rescue test.

Shindo was the mild Ketsubutsu student Class A has seen before the Provisional Hero License Exam. This third-year student turned out to be surprisingly strong and the opposite of mild.

His quirk is ‘Vibrate,’ which allows him to create intense earthquakes and tremors. He has the ability to vibrate anything that he touches but of course this power has a side effect  that these vibrations also create aftershocks in his body.

Honenuki is the strongest student of class B and got admission in the U.A. through recommendation.

His quirk ‘Softening’ is clearly versatile and softens anything that he touches. He uses this quirk to trap his opponents and increase his mobility.

Honenuki is also an excellent strategist with great analytical skills that is highlighted during the joint training sessions.

Hado, Mirio and Amajiki together form the current Big Three of U.A. Hado’s quirk is ‘Wave Motion’ through which she can convert her life energy into waves that shape like a spiral. Her blast waves are strong as it reduces the speed and force of an attack.

During her internship with Ryukyu, her waves were more than enough to defeat two giant villains.

Yoarashi is a first year student and yet another Shiketsu student. Even though he was once a recommended student. Yoarashi scored excellent marks in the Entrance Exam. His quirk is the ‘Whirlwind’ that allows him to control air and wind accurately.

He has precise control over his quirk and can produce powerful whirlwinds.

Yoarashi displayed his potential when he took over 120 students in just one go during phase one of the Provisional Hero License Exam. in phase two, he projected professional control over his quirk by using different kinds of winds at once.

Todoroki is the powerhouse of Class A, despite the fact that he just recently started training for understanding the use of his flames. His quirk is ‘Half-Cold Half-Hot’ and lets Todoroki shoot flames from the left side and ice and cold from the right side of his body.

To avoid body damage, he has to alternate between these elements while attacking. Todoroki swiped out a whole group of students from  Seijin High School and he definitely holds the potential to be the next Big Three.

Amajiki may seem like an unconcerned and unmotivated student but he is incredibly powerful, hence a part of the current Big Three. His quirk gives him the ability to manifest physical traits from the food he eats.

He can also use multiple traits by eating different kinds of food at the same time. During the Shie Hassaikai Raid he got recognized because of his initiative to fight three Chisaki’s henchmen and also as he successfully single-handedly defeated them.

Bakugo is Class A’s one of the strongest students. Though his temper might not befit the qualities of a hero, his abilities should not be underestimated.

His quirk is ‘Explosion’ which allows him to ignite nitroglycerin sweat that his body produces and cause large scale explosions from his palms. He is also the one who has always given Midoriya tough competition throughout the series.

Mirio is a part of the Big Three students of U.A. His quirk is ‘Permeation’ that gives him the ability to pass through any type of matter by turning himself intangible.

As we see that his quirk on its own is not so powerful as this  quirk has many technical difficulties and can be extremely dangerous. But, Mirio worked on all the hurdles and mastered his quirk. Interesting fact, he impressed Nighteyes and defeated Chisaki.

My Hero Academia’s strongest student and strongest hero, Izuku Midoriya. His quirk is the Stockpiling power- One For All and also has the six other quirks.

Keeping aside Izuku’s immense strength, he is also faster than Gran Torino. This is because of his Full Cowl: Shoot style.

Defeating the All For One is only possible by Izuku, he is the only one who can do that. This places him at the strongest position in the whole series. Midoriya is also the only person in the series who can use multiple quirks simultaneously, without much effort.