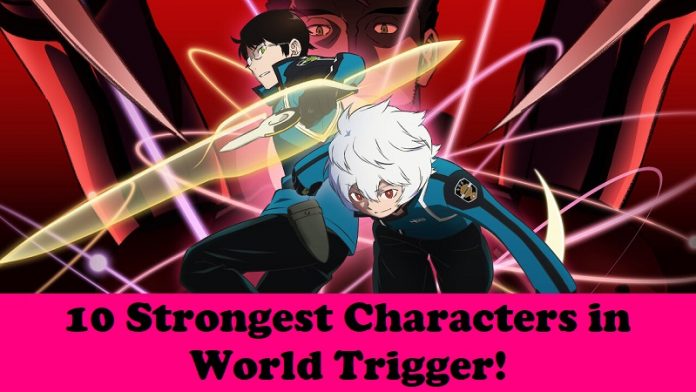 The range of power is dynamic in World Trigger! A person who is weak one day can be fighting dangerous monsters the very next day. The World Trigger is a series filled with spectacularly strong characters. Read ahead to know the 10 Strongest Characters in World Trigger!

Ninomiya is the best Shooter and Border’s No.1. At an overall level he ranks 2nd.

He was the leader of a former A-rank team and always preferred fighting his opponent alone while expecting his team members to be at defense.

Even though he is a shameless person, Ninomiya has a charismatic personality and because of his bad-boy image his Trion Body takes the look of a Host persona.

Ninomiya would have been the Golden Bird of the Border if it wasn’t for Chika.

His trion level is 14 and he tends to take advantage of this and use it to its fullest. His parameters sum upto 62 points which also consists of his attack capabilities which is 12.

The cool thing is that he even owns a Trigger Holder in which he can store 14 Triggers at a time.

He was Tamakoma First’s leader and the strongest Border Unit. Plus, he possesses the power of an entire battle unit. Reiji is also famous for combining these triggers and using them in unpredictable ways.

He also has amazing shooting skills as he employs Minigun to overpower his opponents. His tactical and analytical skills help him foresee the opponent’s moves and defend accordingly.

On the surface,  Lamvanein would reflect the Attacker vibe but no, he is a Shooter. His appearance is deceiving and he is a deadly combination of Brawds with Brains.

He is smart and not ordinary smart, he is scheming and plotting smart. Remember, the large scale Border invasion, it was Lamvanein who tricked many Border agents to bail.

As he is one of the Aftokrator Neighbours, his trion level is 25 and he has modified trion receptors. His Shooter’s trigger Chedelion holds the potential to affect a huge area and has an immense firepower.

Extreme explosive beams are shot out from it and its trajectory can also be changed, plus the beams can also be used as a shield.

The monster in the series is Tachikawa. Although he is Border’s No.1 Attacker, he has some screws loose in his hand. He is impulsive and reckless.

The exact embodiment of Jin’s extreme version is Tachikawa. He is maybe the only one who would laugh while killing his opponents.

There are numerous examples of his power, the time when it took him only one slash to destroy the self-destructive Ilgar.

Normally, to defeat a Rabbit a whole elite A rank team is required, but Tachikawa alone beat eleven Rabbits. Keeping the impulsiveness aside, he is a focused individual who usually doesn’t loose his calm in battles.

One of Border’s board of Directors and the Commander of the Self-Defense Unit is Masafumi Shinoda. He has been a part of the Border from the time Border was established. He immensely respects his senpai Yugo Kuga.

Being the mentor of the Tachikawa, Shinoda is without a doubt, the best Attacker. With a Normal Trigger he is Border’s most powerful agent and his strength is equal to the whole team.

A wise fact about him, he does not prefer participating in battles until it is extremely necessary. His overall parameters are 62 and he has more battle experience than anyone.

Hairein is positioned as the captain of the Aftokrator invasion team. It was a hard time for everyone to put up with him. He belonged to a noble family and as the head of the family, he had many responsibilities on his shoulders.

There is no one who can beat Hairein in strategizing and planning. It was his master plan to conquer Mikado City and kidnap C rankers and the city would have been devastated if it wasn’t for Jin, who interrupted in the play.

He is extremely smart and can sense it when there is another force controlling the scenes from behind.

Hairein is the master of not only battle strategies but he is also a pro at manipulating situation to his favor. He own Black Trion Horns and his overall parameters is 123. Alektro is his trigger and it is a goldmine.

It creates bullets of animal shapes that hold the capacity to invalidate trion the moment they touch it.

We all are desperately waiting to see Amo in action. Considering what the Border Directors say, Amo is the nuclear weapon of Border and is their last bet. Amo’s trion personality is mis proportioned and it changes when he fights.

It is unfortunate that we haven’t seen him fight but we know that he was able to destroy a whole region filled with trion soldiers, all on his own. He is an All-Rounder and uses the Black Trigger.

It is also assumed that its power is a huge scale one range. We get know from Katsumi Karasawa that he has some personality issues which contribute to his Side-Effect problem. His power comes from different colors around him.

Each color indicates different strength levels. From the hype that is created about his fighting skills it will be interesting to watch him fight.

Yuma is one of the major characters in World Trigger and everyone loves him for his adorable characteristics. Yuma proved his metal by showing that his powers are parallel to the A-rankers and if he uses the Black Trigger and Replica he is undefeatable.

Yuma is a Neighbour and was trained by Yugo Kuga who was equally strong to the current Shinoda 10 years ago. He has experience of fighting in the battlefield since the Neighbour’s civil war.

His Black Trigger is extraordinary, as it keeps his original body inside it and creates an artificial trion body that can rejuvenate. The ring produces various combinations which enrich his physical capabilities and can also copy skills from other people.

With out of the world strength and the true gentleman traits, Viza is the mightiest neighbor anyone has seen so far. We see Replica mentioning that Viza is the strongest humanoid of Aftokrator.

Some people also said that Viza is an extremely destructive power and it is unbelievable to see that he was sent to kidnap C rankers.

He is a person who is polite even to his enemies. Being in Aftrokrator’s battle force for years and this shaped him into an intimidating enemy with awesome battle skills.

He was successfully victorious over the entire Galapoula’s regime without anyone’s help. This verifies that he held Border’s strongest agents effortlessly.

Aftokrator’s national trigger Organon is wielded by Viza. Organon is a sword which takes the shape of a staff and can create five orbits that consist of six blades each and each blade is sharp enough to finish a boulder in a matter of seconds.

His parameters sum up to 146 in total and the trion level is 58! Amazing right?

Jin is the charming rice-cracker guy who is the crush of literally everyone. It is impossible not to include him in this list, as he is a character who is overpowered with his black trigger.

We see Jin usually as a carefree guy who is only concerned about his rice-crackers, but when it comes to fighting the neighbors, he is Border’s best bet.

Jin was a former S ranker due to which all his strategies were always exclusive and effective. He was powerful enough to take over Border’s top agents using his Black Trigger retrieval arc tactics.

Surprisingly, he wasn’t even serious during the fight. Till the time he was using Kogetsu he was always second but the second  he shifted to his designed Scorpion, he ranked No.1

His Side-effect just makes the power scale useless and he becomes almost indestructible. Like seriously, this guy can see the future! This changes the game completely.