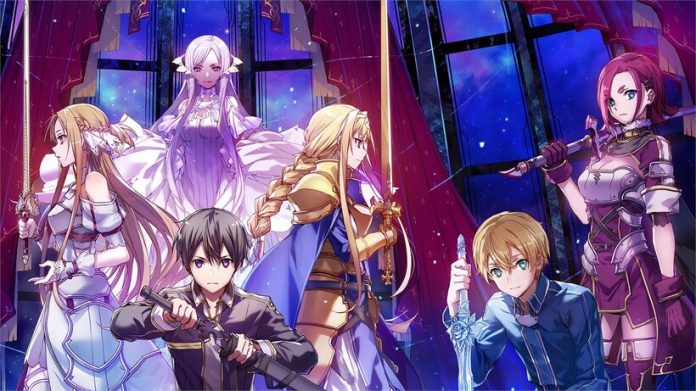 Sword Art Online is one of the most famous anime and has been for years now. It is now a mainstream anime that holds a huge loyal fanbase. The series has always been true to its script and has been completely entertaining for the fans.

Whenever people read about strong characters they want to know who is the best of all. So, here we are with a list of 10 Most Powerful Characters in Sword Art Online Alicization!

You can watch the show on Crunchyroll.

Leafa is the game account of Kirigaya Suguha in the ALfheim Online and Project Alicization.

Kirigaya is the cousin sister of Kirito and is also adopted. She started getting hooked to the VRMMORPG after Kirito got addicted to the game. As a consequence Kirigaya joined the game as a Slyph Warrior.

Being a Slyph Warrior means she was an expert in wind and stealth magic.

She can also fly and heal. The great thing about her flight is that it has incredible speed which makes her one of the fastest Slyphs in the game.

Vassago Casals aka Prince of Hell. He was casted as the antagonist in Alicization – War of Underworld’s sub-arc.

The Laughing Coffin is a red guild and he is the founder of this guild. You will be astonished to know that the prime weapon of the Prince of Hell is a Chinese kitchen knife which is classified as a dagger.

He is quick with his analytical skills and this wonderful skill complements his bloodlust and at the same time makes him an incredibly dangerous enemy.

His durability extends to unimaginable levels and he also has a good amount of system control authority.

Asado Shino is the user of the Sinon account and has over time become a very eminent character of SAO and especially in the recent arc. She decided to start playing to make herself desensitize to guns.

In ALfheim Online, she started playing as a skilled Cait Sith archer. A Cait Sith archer possesses the ability to hit two targets simultaneously from a distance of hundred meters.

Her vision is sharp and two times better than a normal person’s. This visionary benefit makes her a strong long-range player.

Alice Zuberg another important player of the Alicization Arc. When she was young, she was arrested by the Deusolbert Synthesis Seven. She was then compelled to become an Integrity Knight and was named Alice Synthesis Thirty.

In the Alicization Arc, Alice’s weapon is the Fragrant Olive Sword and she can do the Armament Full Control. She holds exceptional swordsman skills, to the extent that she can stand strong against Kirito’s swordsmanship. I know- mind blowing!

Konno Yuuku aka Yuuki is the deuteragonist of Mother’s Rosario arc and is shown in the ALfheim Online. The Sleeping Knights guild was founded by her. This guild is made with fatally ill patients as a virtual hospice.

Yuuki earned the title of Absolute Sword by vanquishing sixty-seven players one after the other. Interesting fact, one of the duels also included Kirito. Yuuki formed the eleven-hit Original Sword Skill that is called the Mother’s Rosario in the game.

Although Yuuki was a gentle-natured girl, she possessed an immense level of potential power which is proved when she secured the 4th  champion in ALfheim Online.

Bercouli also called Bercouli Synthesis One was an auxiliary character in the Alicization Arc.

One of the oldest Integrity Knights ever to be was Bercouli. He was also the founder of the Rulid Village. His primary weapon is the Time Piercing Sword.

This weapon is a Divine Class object that interferes with the discernment of time in the Underworld. Bercouli has the ability to calculate the time of his opponent’s attack and defend against it accordingly.

His supreme trait is his potential to maintain his cool in tense situations.

Quinella is another antagonist in the anime and is a self-asserted Administrator. Although, she served as the antagonist during the first half of the Alicization arc.

She was then the Highest Minister in Axiom Church and was the perfect ruler of the Human Empire.

Quinella manifested immense knowledge about the system and was an exceptionally smart woman.

She gained this knowledge by studying and understanding the meanings of the words used in commands given to her. This also helped her in increasing her power.

Her powers like item generation, manipulation of the durability of non-variable units, and terrain manipulation were her aides in gaining System Control Authority.

Yuuki Asuna is also known as Asuna is the daughter of the former CEO of RECT Inc. she is also one of the main characters of  Sword Art Online.

Undine was the name Asuna started playing with and secured the title of ‘Berserk Healer.’ She earned the title by showing her potential to battle with her rapier swords even after her healing abilities.

Asuna’s swordsmanship skills are almost equal to Kirito’s. In the Alicization Arc, she was able to get into the account of the Creation Goddess Stacia and multiplying her powers. This made Asuna the most powerful player in the game.

Eugeo was the deuteragonist till the first half of the Alicization arc. Just like Alice even Eugeo was apprehended by Deusolbert. He was also forced to become an Integrity Knight called Synthesis Thirty Two.

Eugeo possesses the Blue Rose Sword that is a Priority Class 45 Divine Weapon.

The Sword has immense power and an unbelievable cutting blade. It also has a special power which can turn the ground into ice if stuck in it.

Kirigaya Kazuto, known as Kirito, the protagonist in Sword Art Online and the strongest character or player of all.

Kirito is the one trapped player that survives till the end and defeats the final boss.

Hw was able to survive as a solo player through most parts of the game because of his unparalleled swordsman skills. Durability and object control is his mastery areas as well which make him intimidating.

Note: Kirito would be ranked as fifth in the normal mode.