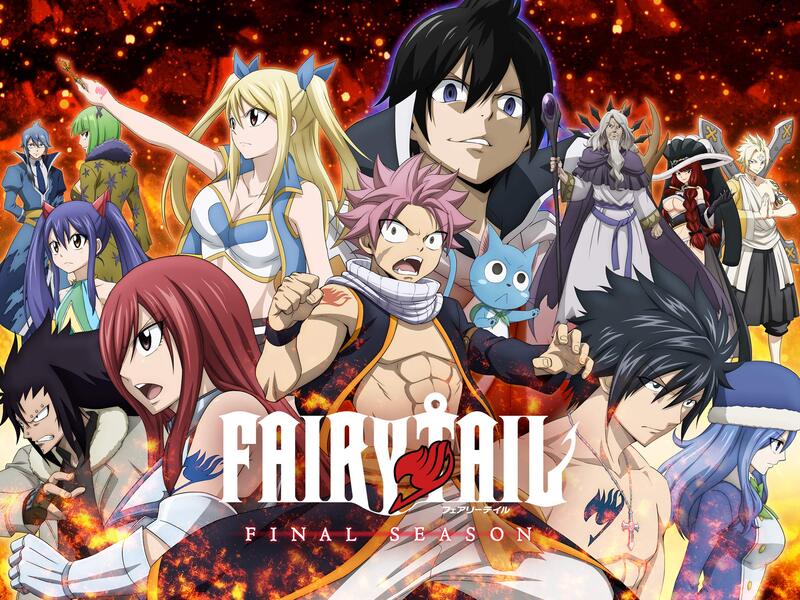 Fairy Tail is one of the legendary anime series ever made as far as the battle is concerned. There is maybe no other anime that displayed battle in such grandeur.

We finally got to see Natsu’s E.N.D form and along with the power of the supporting slayers, he was able to win over Acnologia.

The series represents major power play and the importance of friendship but these are not the only features that make the characters powerful. Here is a list of the 10 Strongest Characters in Fairy Tail!

Furthermore, he is a supremely powerful individual and the series clearly depicts this by showing him destruct the entire Kardia Cathedral while charging at August with a single punch. He was also casually superior over Historia of God Serena.

One of the Spriggan 12 and the one who possesses the power of God in addition to the time-stopping Magic is Dimaria. Dimaria is also known as the “War Princess” and is amongst the strongest the Spriggan 12.

She is undefeatable till the time someone can move in her magic. The only thing that turned wrong and she was defeated was the interference from Ultear.

Furthermore, Sherria’s “Heavenly Gathering of Clouds” attack took her to her extreme limits. Still she somehow escaped but was defeated by Natsu and after this she lost any willingness to fight.

The “Wizard King” and the strongest Spriggan 12 is August. Zeref and Mavis are his parents and his magical ability is called the Copy Magic. This magic enables him to copy or annul the opponent’s Magic just by seeing it one time.

We know that August was able to defeat all the Crime Sorciere at once. Crime Sorcieres are ace level mages and still August easily overpowered them.

His power is more than what any of the other nine possess. One of the most respected of the Ten Wizard Saints and Fairy Til’s Guild Master is Makarov Dreyar and even he deranged by the mere memory of August’s abilities.

Most evil and the most powerful Mage of all is Zeref. He is the holder of some intensely dangerous ancient magic. The former Emperor and Founder of the Alvarez Empire, also the elder brother of Natsu Dragneel and father of August.

His magic is so vast that he himself cannot consciously control it. The emotional sense present in him can be seen as a reason for his lack of control over his Black Arts. Ankhserum once cursed him and from then on he cares too much about the lives of others.

The King of Fire Dragons and the foster father of Natsu Dragneel and Ignia is Igneel. His physical strength is more than required to fight equally and overpower the Dragon King, Acnologia.

In fact his breathe is enough to render large-scale destruction. His powers now are not in an comparison to his prime because he sealed himself.

Member of the Spriggan 12 and the third strongest member at the back of Irene Belserion and August is Larcade Dragneel.

He was initially regarded as the son of Zeref Dragneel and Mavis Vermilion and he is amongst the many Etherious created by Zeref.

An imperfect Etherious’ which was a sample in creating the actual perfect E.N.D. His magical powers are majorly manipulation of human emotions and needs which in the end would lead to eternal death.

A some of the early samples of E.N.D, Larcade has ended up with a huge amount of Magic power. He is called the a  “secret weapon” by Zeref himself, because of his potential to win against Acnologia.

Counted amongst the most savage members of the Fairy Tail Guild. The special magic he possesses is called Crush magic but there have been no such incidents where we see him using it as he is always shown completing some or the other high-level S-Rank missions.

However, Gildarts has proved to be an extremely hardwearing character as we saw him stand against Acnologia’s attacks and survived to tell the story.

Second strongest member of the Spriggan 12 and the most powerful woman in the series is Irene. Irene is the mother of Erza Scarlet and is the inventor of Dragon Slayer Magic.

With the more than 400 years of experience and the legendary Magic she possesses she can manipulate the core geography of any place. Zeref was her teacher and he always appreciated her skills.

Moreover, she can do various kind of things like shifting the whole climate easily of M.T Zonia and even retract the Fairy Heart from Mavis. Brandish said the the powers Irene possesses are equally comparable to that of August’s.

One of the side MCs of this series is Gray. His magic is called the Ice Devil Slayer Magic and he has been shown on par with the E.N.D. Similar to other Slayers, to enrich and enhance his powers he can consume external sources of ice.

This magic is overpowering and effective against all Demons. Gray is now a master of this Magic and is enough capable of encompassing his enemy into a spiked cocoon of ice and manipulating it.

There was one instance shown where Gray has just inherited the Sliver Magic of his father and he could wholly freeze multiple twisters from Tempester.

Zeref Dragneel’s younger brother and his most powerful Etherious: E.N.D is Natsu. He is also one of the five Dragon Slayers transported to the future to defeat Acnologia. Zeref’s greatest creation is E.N.D and is the only one who can slay the Black Wizard.

Moreover, his powers are even more strong than some Gods in the series and he can casually just win over the strong Wizard who was parallel to God Serena.

In the fully charger mode, E.N.D possessed the potential to conquer the Dragon Animus. In the mean time he was able to kill Acnologia with the assistance of all the Dragon Slayer powers.

The strongest character of the entire series and a powerful Dragon Slayer as well is Acnologia.

The time he over uses his Dragon magic he can easily transform into his Dragon form. His magic is so strong and potent that he could reap souls of Dragons and all the magic he consumed could only be for replenishing himself. Only in Acnologia’s human form can he move as quickly as lightning.