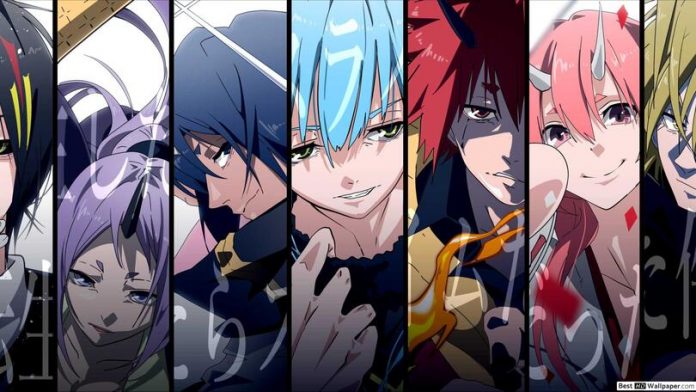 One of the most popular Isekai anime series is “That Time I Got Reincarnated as a Slime”. The series is an always-growing world of fantasy that consists of demons, monsters, vampires and so many more.

The characters in the series have powers ranging from destroying the whole world to acquiring the position of a god. This does not make the list-making task easy. Still, we have prepared a list of the 10 Strongest Characters in TenSura!

The Lord of Darkness and one of the oldest demon lords is Guy Crimson. He is regarded as the most powerful individual in the universe and also as the mightiest Demon Lord before Rimiru.

He easily defeated Leon Cromwell, True Dragon, and left Milim Nava in an impossible movement position. With the skills and talent Guy possesses he is the only one who could fight Rimiru till the end of the series.

The “White Ice Dragon” and the second in the four True Dragons are Velzard. She is also the Strongest True Dragon judging in the basis of power and the largest Magicule store after Veldanava.

She often tortured Veldora even though she was much more powerful. Still, by the end, she vanished from the picture because of the coming of Rimiru.

The Star King Dragon, the oldest True Dragon, and the creator of this world are Veldanava. Milim is his daughter and when she was born, some of his powers were transferred to her.

As a consequence of this, he becomes the forefather of all the dragons and has been seen in numerous powerful avatars throughout the series.

The third True Dragon species and the “Scorch Dragon” is Velgrynd. Once she was swallowed by Rimiru, she was granted a clone body and fought the last battle with him. She is famous for her fire abilities and unbelievable speed.

Her Flame God Cthugha’ ability helps her increase the heat of her body that causes the burning.

A student from the Freedom Academy and a Summoned Otherworlder is Chloe O’Bell. At the mere age of eight years when no one expects a child to be powerful, she was strong enough to rank as a strong character.

Once she became an ace player at swordsmanship, she was invincible. These skills combined with her time-stopping ability made her mighty enough to fight with Guy Crimson for three consecutive days.

Dagruel is also known as “Continent’s Wrath” and is one of the  Eight Star Demon Lords. He protected Heaven’s Gates and then later he became a part of the demon lord’s second generation.

The holy power of his body made him reject the Demon Lord Seed, however, when the Demon Lord removed the giants and the fairies, he woke as a true demon lord.

One of the oldest Demon Lord and the embodiment of destruction is Milim. She is the daughter of Lucia and True dragon Veldanava and she got the powers of her father.

Coming from the  Special S Rank Ca, catastrophe-class, she is the world’s most powerful being.

After she went rogue, she could only be stopped by Ramiris and fighting Guy Crimson for straight seven days. Her Wrathful King Satanael ability combined with her Magicules reserves makes her near to invulnerable.

The catalyst of motion in the series is Storm Dragon Veldora. The fourth True Dragon got sealed before meeting Rimiru. Once he was released he possessed the ability to take over Rimiru’s clones and his original body.

He improved his fighting style and analytical skills after reading manga and so stopped investing time in Magical powers. He was also able to overpower his elder sister Velgrynd.

The former Free Guild’s Grand Master and the main antagonist of the series is Yuuki Kagurazaka. He is that character that you either love or hate but he is an extremely powerful being.

His powers were just enough to win the battle against Milim, Guy, Ramiris, Velzado, Velgrynd, and many more.

The strongest character in the TenSura (That Time I Got Reincarnated as a Slime) series is Rimiru Tempest. He is a god-level being who has transcended Veldanava. The powers he possesses are almost equal to god, he can go anywhere in the world at any time and also travel between different worlds.

Once he became a demon slime, his powers further amplified and his abilities are ace level similar to Infinite Regeneration, Universal Thread, and so forth.