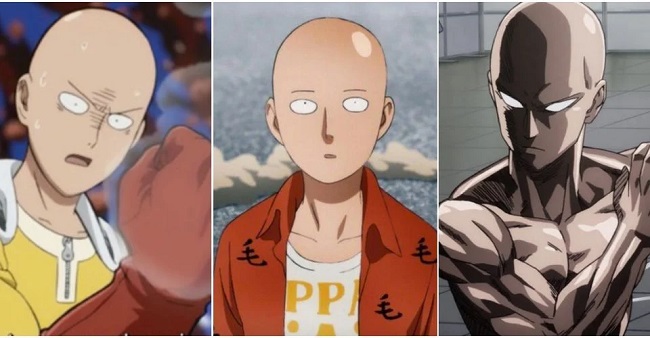 The only time anyone survived his punches were when he held back or sympathized with the person, this happened during his fight with Boros. This leaves everyone wondering what the source of his godly power is.

When he was asked by Genos, one evening after training, Saitama said what he knew, he did a regimen of 100 push-ups,100 sit-ups, 100 squats followed by 10 km of running daily, without breaks for 3 years.

Additionally, he gave up using air conditioners and heaters during the hot summer season and cold winter season.

Genos believes that Saitama himself doesn’t know the source of his immense power and hopes spending more time around him will reveal the truth.

Another theory by Dr. Genus is that Saitama worked so hard during his training that he removed his Limiter. This is also the cause of his balding.

When we talk about Limiter, it has been explained in the manga as the limit to which every human being can grow, no matter how much effort they put in. However, Saitama worked so hard that he removed his limiter and gained this power.

Humans that desire such power deeply, normally become monsters and gain power using monster cells. It is still unknown how Saitama exactly managed to break his limiter despite having a normal birth and a normal life.

Saitama wanted to become a hero just for fun at the start but after reaching the strength level that he is, he started believing that he had no room left to grow and started losing interest in his hero work.

He stopped taking it seriously and would rather take hours trying to kill a mosquito than go out and fight. He has become an indifferent person and his feelings have dulled immensely.

Saitama might seem invincible but despite his tremendous strength, he is still a human after all. He still needs food, water, air and a home to survive and he isn’t exempted from growing old and death.

He lacks technique and intelligence, because of which even after making history during the physical test of the Hero Association, he couldn’t get a Class S Rank due to the written part of the test.

Even though he believes his life to be dull, there is still a chance for growth which will come with a change of perspective.

One-Punch Man is a web comic about a Japanese superhero established in early 2009 by artist One, with a manga adaptation illustrated by Yusuke Murata. It is about a man named Saitama who becomes a hero just for fun and ends up being the strongest hero on the planet.