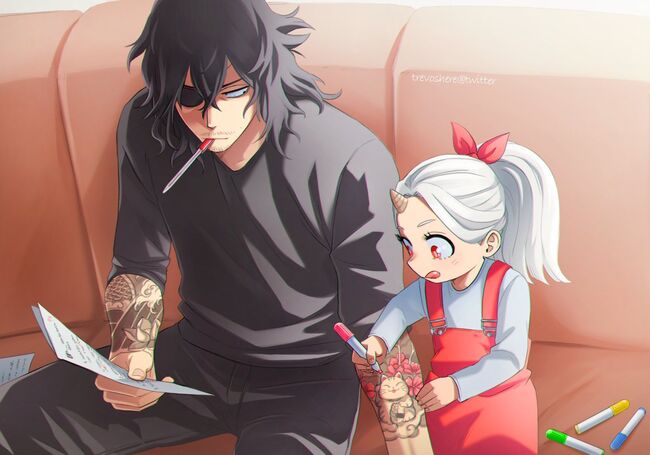 Shota Aizawa(Eraserhead) is one of the most notable characters in Boku no Hero Academia, which doesn’t disappoint with its unique set of characters, which are adored and loved by their fans.

He is known for being a dedicated member of the UA High School faculty, Class 1-A’s homeroom teacher, his straightforward demeaner, his sleepy nature and his dedicated attitude towards the disorderly students of Class 1-A.

Despite being one of the most popular characters in the show, there is little known about his life outside of U.A. High school.

Is Aizawa Sensei married? Does he have children?

All that is known about Aizawa Sensei till now is that he is a professional hero who goes by the name of Eraserhead, and that he is the homeroom teacher of Class 1-A.

There is very little information about his life apart from UA. It is unknown whether he is married or has any children. He has been acting has Eri’s guardian due to his quirk and is a father figure to her due to his nurturing character.

Who is Aizawa Sensei?

It is already known that he is a professional hero (Eraserhead), and he is also the homeroom teacher of Class 1-A of UA high school.

Apart from that, he is a private and a stern man who is very logical and has no filter whether it’s with his word of his ideas. He is known for his disheveled appearance.

He is infamous at UA for threatening his students with expulsion and has expelled 154 students till now. He is shown to have great expectations of his students and he has belief in his students’ morality.

Despite his personality, he has shown on several occasions that he genuinely cares about his students and will go to great lengths to protect them.

Is Eri related to Aizawa?

Eri was introduced in season 4 as an abused girl who couldn’t smile due to the influence of Kai Chisaki on her. Kai Chisaki used her quirk rewind, to create drugs which were to be used for destroying quirks.

She is the granddaughter of Shie Hassaikai’s boss but after he is put in a comatose state, kai takes over and starts manufacturing the quirk destroying drug, abusing Eri since.

After being rescued, she came under Aizawa’s care and started living in the U.A. faculty dorms.

Eri is not Aizawa’s real daughter, but he does appear to have a soft corner for her and has been fulfilling his responsibility of being her guardian without any complaint.

He is the only one in the show who can control Eri’s quirk as even she also was unable to control it after a fight between Izuku and Overhaul fight. She has been under care of Aizawa and U.A. high afterwards.

Aizawa is very attentive and involved in his role of taking care or Eri and has been working to rehabilitate her. He also uses the positive influence of UA high’s students to uplift her and help her overcome her abuse.

Boku no Hero academia is a story about a young quirkless boy Izuku, and how he became the greatest hero alive. This manga series is written and illustrated by Kōhei Horikoshi, and it has been serialized in the weekly shonen jump since July 2014.