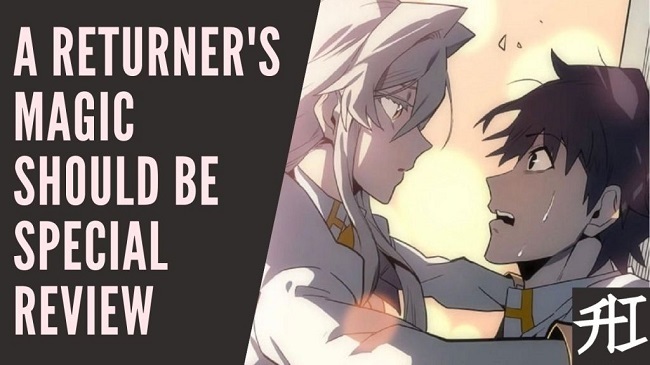 Infused with fascination and arousing the interest of the readers is the ‘A Returner’s Magic Should Be Special’. If action, adventure, comedy, fantasy, martial art and glorious school life are your areas of interest, then with no second thought, you should give it a read.

It is a Korean web novel by Yook So-Nan. The illustration is by ORKA. It has also a Manga adaptation.

The plotline is set in a parallel world named the ‘Shadow World’ consisting of routes through which it is difficult to find a way, much of a maze to be precise.

We are introduced to the protagonist Desir Arman who returns from a calamitous/catastrophic future into the past. The future is calamitous because he is one of the only 6 surviving members of the human race as mankind failed to clean the Shadow Labyrinth.

This eventually leads to the end of the world. The protagonist returns from the future to the past after death or a near-death experience.

Returning to the past, he is reunited with his friends and loved ones. He is determined to change the past and looks forward to a better world in the coming future; and not the nightmarish one he has experienced.

He gets himself enrolled at Havrion, which is the nation’s first Magic Academy.

He retakes his school years, he also trains his fellow classmates for that future world, so that they too survive this time. He has got the responsibility to save mankind and this is the only chance that he has got.

Time passes by and only 3 years remain for the emergence of the shadow world.

Will the destiny remains the same, or will the protagonist will be able to change it.? No spoilers here.

The best thing is it never gets boring and keeps our interest aroused by a sequence of character introductions.

It keeps our spirits high with the action scenes, the new villains that keep appearing.

The protagonist knowing skills of the future, time-travel and related stuff adds to the sense of interest and creates a sense of excitement as well. Magic scenes undoubtedly attract us.

It arouses interest, but one negative point is that it is much like Manhwa Solo Leveling and quite similar to Manhwa Tales of Demons and Gods.

The story of Tales of Demons and Gods is the same too. Mangas and anime don’t have much newness, they are all quite alike.

Overall, it is a must-read. A constant sense of knowing what will happen next makes it much interesting and impressive. Altogether, the sense of enjoyment prevails.

Despite the similarity stuff, it is good. And if you are new to this, you must give it a read.