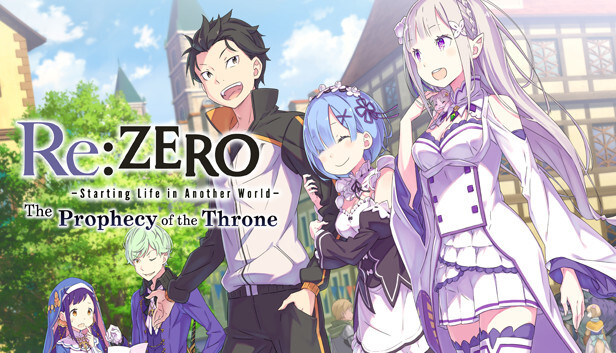 Re: Zero − Starting Life in Another World is a series created out of a Japanese light novel which was written by Tappei Nagatsuki and was later illustrated by Shin’ichirō Ōtsuka. In July 2015 Kadokawa made an official announcement of a Television series adaptation of this story.

The protagonist of the series is Subaru Natsuki who is a hikikomori. One day he suddenly found himself in another world when he was going to his home from the grocery store.

The lead character of the series is Subaru Natsuki who is shown to be living a modern-day life as a social recluse. But his whole life turns upside down when he comes out of a convenience store and is suddenly transported to fantasy land.

This whole situation is very strange because as soon as he arrives he is attacked by some gangsters. As Subaru has no defense and is holding a grocery bag and the useless phone he ends up being beaten up badly.

Then arrives a peculiar beautiful lady named  Emelia who is running after the one who stole her insignia and saved Subaru. As a gesture of gratefulness, Subaru extends his help in the search for Emelia’s insignia.

However, both of them are unaware of the fact that there is a much darker force following them in the shadows. Only some minutes after the get to the location of the insignia, Subaru and Emelia face their fatal fate and are cruelly murdered.

Following this Subaru instantly opens his eyes to a familiar scene— this scene again shows him being confronted by the group of thugs and meeting Satella again. This story continues as history keeps repeating itself but each time the scenario deepens.

Re: Zero is a very intriguing anime and is very unique in many aspects such as the storyline. The show contains fantastic characters, animation, and even the voice-acting is praise-worthy.

Each episode ends with a banger, keeping you hooked and leaving you in anticipation for the next one.

2. Is It Worth Watching?

Re: Zero is a series that is worth your time. The plotline is one of the major USPs of this anime and the overall development of the characters is also pretty prominent.

Another factor that keeps the viewers hooked to the story is the complex relationships shown between the character. The series manages to maintain a decent balance of funny, mysterious, romantic, and thrilling in the story.

The story setting and locations are all excellently created. Every element whether the mansion, forest, city, or fields everything is vibrant and saturated with colors.

There are various action scenes in the series. These fights can get pretty violent with blood all over the screen. So people who have an uncomfortable feeling about seeing blood, be aware.

The extent of violence in the series is seen when they show the corpse of dead children. Also if animal cruelty is something you cannot handle I would advise you to be cautious.

Re: Zero is a wild ride of emotions and unpredictable things happening in the story. The series is a Bildungsroman series where the complete development of a character is shown precisely.

With the skillful animation and the excellent artwork, Re: Zero is an isekai triumph.