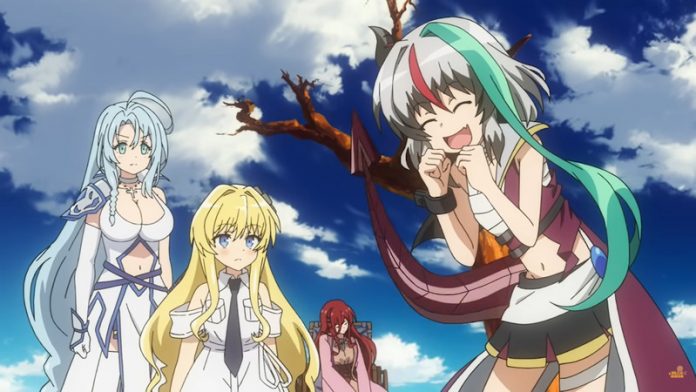 Combatants Will Be Dispatched is a pretty straightforward show. It’s a fantasy anime reinforcing the norms of the done before fantasy genre and delivers many laughs making it look like one step above other typical anime comedies.

But, provided the sheer ridiculousness of the plot and cast, Combatants Will Be Dispatched turns out to be a quality satire with consistent laughs.

After a very fatal death, the protagonist Kazuma Satou encounters a beautiful goddess named Aqua. Aqua extends a proposal to Kazuma which is that he can either go to heaven or rejuvenate in the form of an adventurer in fantasy land.

So, if he decides to reincarnate in the fantasy world he gets to choose anything for his adventure. Seeming to be an intelligent move, Kazuma choose Aqua to accompany him, but unfortunately, this was not a wise choice because Aqua is not such a powerful goddess.

2. Cautious Hero: The Hero Is Overpowered but Overly Cautious

Goddess Listarte has been entrusted with the responsibility of saving the Gairbrunde world. While the task is obviously challenging, this is a golden opportunity for her to shine and become popular amongst the god world.

To do the job perfectly, she begins to look for a hero and she does come across one immensely skilled hero. See the whole journey of the goddess and the hero in saving the world.

Shinichi Kanou applies for a job that ends up changing his whole lifestyle. While giving the job interviews, he gets abducted and sent to a fantasy land called the Eldant Empire.

This empire is a land of elves, dwarves, and dragons. After reaching the empire, he learns that the Japanese government has made him responsible to spread the love for anime and manga in this fantasy land.

Shibata Genzo aka Animal Mask is a pro wrestler. While fighting his final tournament to achieve the ultimate title of the world champion, Genzo is suddenly summoned to another world.

After reaching the fantasy land he meets the princess and the royal priest who ask him to fight the demonic beasts and also defeat the demon lord. Being an animal lever, Genzo is not okay with doing this and is now stuck in this world, he has no way to go back to earth.

Satan the Lord of the Demons has just begun conquering the Ente Isla and he plans to take over the whole world. But his plans are crossed by the hero Emilia.

So, Satan used a dimensional portal and gets transported to the human world. Now living the human world with bare minimum magic is going to be an immensely hard task for Satan.

To fit in into this world, he disguises himself as Sadao Maou and works at a local fast-food restaurant named McRonald. Later in the story Satan decides to ace the corporate ladder and then be the ruler of this world.