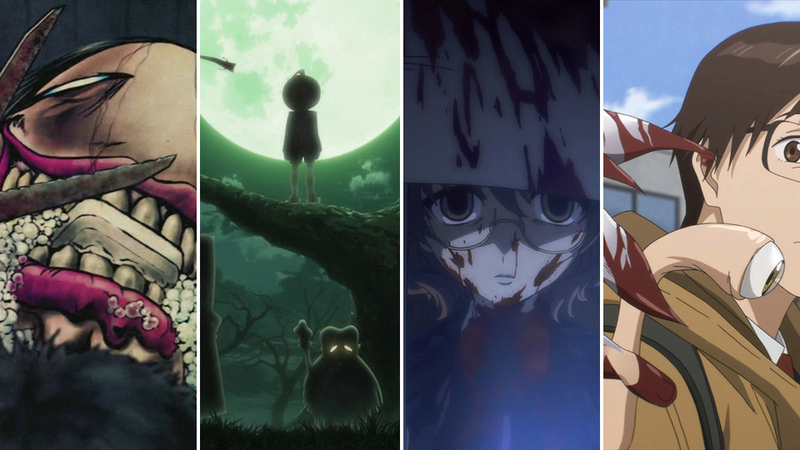 “Horror” is a subjective genre, everyone perceives it differently based on their individual experiences. For example, something supernatural can be horrifying for someone, something dark and clingy can be a horror for someone. Whereas there are people who like the thrill and adventure that horror brings with it.

Crunchyroll is a streaming service that has a vast library of anime. From these various anime, there are some in the horror genre which is unique and justifies the genre. So, we made a list of 10 best Horror Anime Available On Crunchyroll!

Parasyte: The Maxim is a series that reflects the idea of coexistence in an excellent manner. The Earth is suddenly attacked by some serious parasitic aliens. These aliens have the power to take full control over the human brains and the humans are unaware of this fact.

Shinichi Izumi the protagonist is shown as a victim of this parasitic alien but they are only able to take control over his right arm because they were not able to go to his brain. Having been left with no other option Migi the parasite helps Shinichi save humanity.

This horror anime takes you back to your childhood days. The ghosts have come back to seek revenge after they were exorcised by a particular student.

Satsuki and Keiichirou Miyanoshita have recently lost their mother and decided to shift from their hometown to another place. There they join a local school and discover the fact that the school is haunted.

However, they did not take any serious interest in this haunted thing but soon enough encountered some ghosts and realize that these ghosts are after home.

8. Kabaneri of the Iron Fortress

Kabaneri of the Iron Fortress is a similar series to Attack on Titan. The series shows Kabaneri who are monsters that eat humans. These monsters have evolved from a strange virus that was mutilating during the Industrial revolution period. There is only one way to kill these monsters and that is by destructing their steel-coated hearts.

The protagonist is a young man named Ikoma who aspires to fight against these Kabaneri through trains which is the only weapon that can pierce through their steel-covered hearts.

This series is a story depicting the ultimate survival of humankind against the vicious human-eating monsters called Titans. For centuries, people have been forced to live within a barrier to be safe. However, one day a giant Titan manages to cross the barriers and from here starts the intriguing story of the survival of humankind.

The lead character Eren Yeager has been in mourning because of the death of his mother but he decides to seek revenge against the titans by completely finishing their existence. To do so he join the Survey Corps sling with his sister Mikasa Ackerman, and childhood friend Armin Arlert.

Another is horror series which has been made with utter brilliance. The plot is set in a town named Yomiyama which has been eternally doomed by a curse after Misaki a student from North Middle School died. The protagonist Kouichi Sakakibara joins the same school after 26 years of the deadly incident.

Later in the story, he meets a girl wearing an eye patch. The name of that girl is Mei Misaki and she is basically ignored by everybody. But Kouichi decides to keep everyone’s perceptions aside and be friends with her.

Mononoke is series that shows a man who is a medicine seller and goes all across Japan exorcising spirits. He is a mysterious man who is a master of the occult.

The spirits he exorcises are called “Mononoke” which are spiteful spirits. After finding these spirits he learns their form and truth in order to kill the spirit with his all-mighty exorcism sword.

While in search of these spirits, one day he reaches an Inn where he finds a pregnant woman resting but soon enough we see that the entire room is infected by Zashiki Warashi. Zashiki Warashi is a lethal group of Mononoke.

Yamishibai: Japanese Ghost Stories is a series that will swoop you off your feet with its excellent story narrative and clever use of background music. The show displays a mysterious man who wears a mask on his face and goes to places where kids play.

Once he reaches those places he recites horrifying stories which are based on urban Japanese legends.

This strange man uses a kamishibai which is a paper scrolling device that decorates his story with eerie visuals. Every day he had some new stories and the children loved the horror.

School-Live is a series that shows the life of the survivors of a dangerous zombie apocalypse. The story is sweet and terrifying.

The lead character of the series is a young girl named Yuki Takeya whose life seems to be going pretty well. She loves being in her school and enjoys the cheerful life as a member of the School Living Club. However, this happiness does not stay long in her life as this was all a delusion made to run away from the reality of the world of a zombie Apocalypse.

Puella Magi Madoka Magica is a series that shows that greed for power will always be destructive.

Kyuubey is a cat-like creature but a magical one and Homura the protagonist encounters this creature one day. We know that Homura is a transfer student and that the lives of Madoka and Sayaka change dynamically after this encounter.

Kyuubey makes an offer to these people saying that if they want all their wishes to come true they will have to be magic girls for him. However, Homura warns them to not accept the offer because she knows the consequences of being a magical girl.

The Promised Neverland is a series with a beautiful story but one which depicts some terrifying truths.

The Grace Field House is an orphanage and the gate to this house is from the forest. Isabella is the “Mama” of these orphans and teaches them all to follow one rule very strictly which is to never cross the gate boundary of the house.

The strange thing that happens to the kids that are adopted from here is that the orphanage never gets to hear back from them.

Sensing some suspicion in the situation the oldest three siblings decide to find the truth behind this.