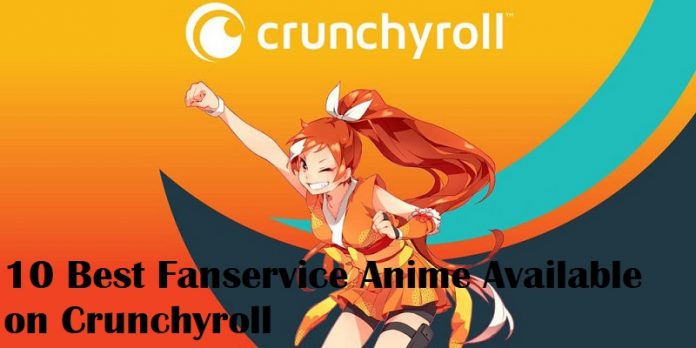 You don’t always have to watch series with concentrated and heavy plots. Sometimes it’s okay to keep things light. Sometimes we just want to take a break from our heavy routines and pass some leisure time.

This is where fanservice anime steps in.

Keeping aside what people think it is not wrong to enjoy light humor and some fanservice. Some anime series strikes the perfect balance between fanservice and a worthwhile storyline.

So, here we are in your support with the list of 10 best fan service anime that you can stream on Crunchyroll.

Raku Ichijou is a fresher in the high school and the heir of the yakuza family. Despite the well-known family background he hopes to stay as far away as possible from the family business.

Even after this utter lack of interest in the family matters, he is forced to be in a pretense relationship with Chitoge Kirisaki to maintain good a good vibe between the mafia families.

The series has a decent level of fanservice and is a lot more than just romance and comedy.

You can expect a decent amount of fan service in this battle of best girls. Despite having that harem tag, Nisekoi is more of a romance anime with loads of comedic moments along the way.

This series has everything you can complain about but still, you will enjoy it.

The story is about a 14-years-old solo adventurer named Bell Cranel. He wishes to become a legendary adventurer of the whole land. He works under the goddess Hestia and becomes the single member of the Hestia Familia.

Further on, he goes on an adventure to discover the monster-filled catacombs of the city called the dungeons. Bell is also on the strive to survive the city Orario.

KonoSuba is an isekai tropes parody with a brilliant comic and cast chemistry element.

Kazuma is a shut-in NEET who unfortunately died a pretty embarrassing death.

After death, he meets Aqua, a goddess who reincarnates him in a world where he has to fight against demons. To do so he has to choose an object and he chooses Aqua.

Fire Force follows Shinra Kusakabe who is a third-generation pyrokinetic going by the nickname “Devil’s Footprints.” His special ability is that he can light up the fire in his feet anytime he wants.

As a child, he was sidelined because it was presumed that he killed his mother and younger brother with fire.

Going further, he joined the Special Fire Force Company 8. But soon he realized what a mess this company is and a small special group knows about the fire that killed his family.

This series is a solid shounen and has a good amount of fanservice.

Akame Ga Kill is darker than in comparison to other fanservice series. It has an incredible plot but the manga has a more satisfying ending.

Tatsumi joins an assassination branch of the revolutionary army called the Night Raid. The Night Raid aims to remove prime minister Honest from his throne as it was his rule which brought about poverty and destruction. It took Tatsumi to fight the Empire to understand the cost of fighting for a purpose.

Kill La Kill’s story is made on the fanservice. The characters in the series get power by ripping off their clothes. Bt there is more to the series than just fanservice. The plot contains an amazing amount of action and deeper meaning intentions.

The protagonist Ryuuko Matoi joins the Honnouji Academy as a student. The president of the student council is the rude cold-hearted person named Satsuki Kiryuuin.

She also has four other underlings called the elite four. Ryuuko is challenged to a battle where she is seen badly losing until the arrival of the God Clothes which enables her to fight against the elite four and the president.

Though people think that Fairy Tail is filled with unwanted fanservice the plot is quite engaging. We see strong family-like bonds, magic, adventure and so much more.

The story follows the wizarding world of Earthland where many powerful wizards have built a guild called Fairy Tail. these wizards employ their magic to fulfill quests in return for money.

Luch Heartfilia one of the main characters is a mage who desires to become a qualified wizard by being a part of the famous Fairy Tail guild.

No Game No Life is full of technology, colors, strategies, and a touch of Death Note. This anime is eye candy and will dazzle you throughout.

The story is about two siblings Sora and Shiro who are obsessed with video games. They go under the name Blank and are literally undefeatable in the online gaming world. One day they are challenged to a battle in chess with the god and obviously they win.

After this victory, they are called into the world of Disboard. In this world, no one is allowed to harm one another and every issue can be settled through playing games.

2. Magi: The Labyrinth Of Magic

Magi: The Labyrinth Of Magic is not such a widely known series but it has a fantastic fantasy plot almost parallel to some of the best serious shounen series out there. It has both the required elements- light-hearted comedy and decent fanservice.

The story shows a world where many labyrinths exist and are called Dungeons. The Dungeons possess unbelievable treasure inside them.

A unique class of Magicians called the Magi guides people through these dungeons in order to acquire power and build huge kingdoms.

One of these days, Alibaba Saluja goes through this path with Aladdin and unintentionally destroys the carriage. In order to cover the loss, they decide to conquer the nearest dungeon.

Food Wars follows a fifteenth years- old boy named Yukihira Souma who joins the prestigious cooking academy Totsuki Culinary Academy to prove his worth to his father. The series included culinary wars, clothes tearing apart, flying around naked and so much more.

Keeping the fanservice aside the plot is pretty interesting with all the tasty looking food and amazing battle shounen elements. But be aware, do not watch this near family because the foodgasms and moanings from the taste of good food is loud.