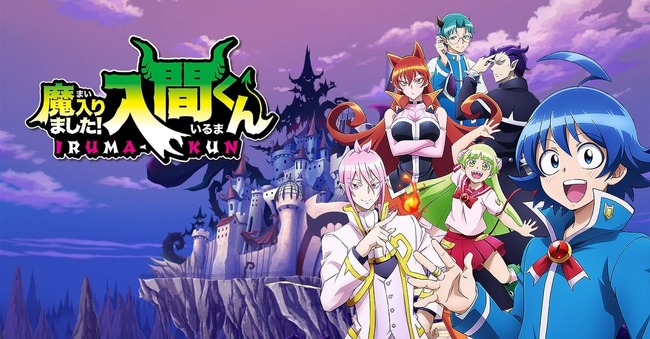 Our childhoods were filled with stories about demons being evil. In addition to hurting us, they exploit us and cause us despair.

Contrary to this, Japanese animation demonstrates all these conventional stories to be false and demons being good creatures. Welcome to the world of “Welcome to Demon School Iruma-kun”.

In this animated series, demons go to school to attend lectures on magic, but the strangest thing is that they act more human than humans themselves.

If you have been keeping up with the show then you might be wondering, Hmmm, are there more anime like “Welcome to Demon School! Iruma-kun” out there? You have been heard. A well-rounded guide to anime lists can be found here at ___________.

Check out the top 10 anime like Welcome to Demon School! Iruma-kun

Would we experience a catastrophe if the strongest enemy of mankind visited Earth? Then, you must be contemplating destruction, gluttony, and havoc.

Meet Sadao Maou, a powerful player of the underworld, who happens to sell burgers in Mgronald (a name change for copyright infringement). It’s as hilarious as it sounds and you can’t get enough of it.

Furthermore, you’ll appreciate the comedy type of a side character who knows what to say in any kind of situation.

The only human boy in all-demonic school surrounded by beautiful demon girls…well this is exactly Rosario Vampire. A human boy named Tskuna was accepted into the school. He quickly realized, however, that this wasn’t a normal school, it was a school for monsters.

In his time there, he keeps the fact that he is a human secret from the monsters while making good friends with some of them. A classic harem romance anime, the anime is pretty similar to Welcome to Demon School! Iruma-kun.

Despite living in a world inhabited by superhumans, Izuku Midoriya is unable to obtain powers. However, after this dreamy Quirkless boy acquires the powers of the world’s greatest superhero, All Might, he can now fulfill his dreams of becoming the best hero in the world.

Izuku soon finds out being a hero is much more complicated than it appears once he enrolls in UA, the high school for heroes. As far as appearance and personality go, Izuku and Iruma are quite similar with utmost dedication.

Pervert alert! Jitsu wa Watashi wa (Actually I Am…) portrays a comedic tale of vampires living normal lives among humans. As a result of her appetite for blood, the show’s main character, Youko Shiragami accidentally reveals her vampire form.

Our hero Asahi has to take care of her now as she could be expelled if others find out she’s a vampire. Now as partners, our protagonists are doing all they can to keep the secret they have been withholding from the world.

5. The Demon Girl Next Door

In my first viewing of the series, I was shocked to see how it was missed by the anime community. This slice of life comedy about a girl who wakes up one day only to discover she has been transformed into a demon is the major plot of The Demon Girl Next Door.

To escape the pangs of poverty, Yuko Yoshida sets the course to find a magic girl and defeat her. In that way, she can stay out of poverty and keep bad luck from coming into her life.

Many view Tsunayoshi Sawada as a human punching bag. A sore loser all his life, Tsunayoshi meets an infant Hitman known as Reborn.

A seemingly odd development is that Reborn trains the protagonists to become stronger and become the leaders of the Mafia Famiglia Vongola Famiglia. Watching this show will give you a nostalgic feeling and will catch you off guard.

7. Classroom of the elite

A little different from Welcome to Demon School! Iruma-kun, Classroom of the Elite might well be described as a psychological series with elements of seinen.

Those who like shows such as Death note and Tokyo ghoul, but still want to catch the appeals of Iruma-kun, should definitely check this out. The series features something sinister going on behind the façade of this prestigious school.

How long has it been since you laughed so hard that you started crying? If you don’t remember then I guarantee that you will enjoy this. Konosuba is the embodiment of isekai genre.

It is worth watching because it combines comedy elements, perverts, and characters who have no regards for other people whatsoever. From masochist Crusader Darkness to the bum goddess Aqua, Konosuba will tickle your mind in every possible way.

Contrasting to the idea that Zombie fiction can have no novel facet to evolve, Is this a zombie? turns a new leaf. Nope, it’s not about zombie feelings or zombies with a heart.

Here, we’re discussing zombies who dress up as magic girls and defeat other zombies. With the ingredients of perfect comic timing, enigmatic silent characters, and with an unbelievably clever plot, this zombie anime shouldn’t disappoint.

What is the likelihood of dead girls becoming idols? Well, that’s the core plot of Zombie land saga. Following an encounter with the beloved truck-kun, Sakura Minamoto finds herself behind the bars.

She acknowledges the gravity of her situation within the next couple of minutes, the fact that she is dead and has to cope with the other 6 zombies is too much to take while practicing an idol life. In order to find out what the future holds for these ladies, only one way remains.