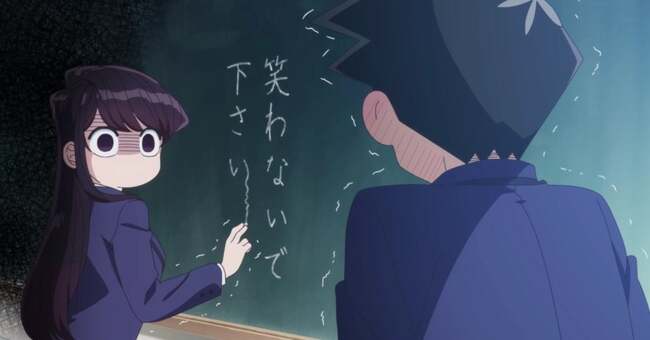 This manga follows Shoujo, a gracious girl who catches the attention of the school right away but is lousy at communicating with others regardless of her fame. Hitohito Tadano is a regular high school student.

In order to address Shouko’s communication problem, he promises to assist her in acquiring a hundred friends. For those who want more of this kind of introverted comedy, here are 10 anime/manga recommendations.

Kaguya-sama: Love is War is an incredibly amusing slice of life comedy that has a lot of depth, something you won’t regret watching. Miyuki Shirogane, the school Council President and Kaguya Shinomiya, the vice president, are the protagonists in Love is War.

Regardless of whether they are in a relationship or not, they are treated like it.

Even though the two have grown to love each other after spending so much time together, they are both reluctant to admit it because it would be a sign of vulnerability.

To get a confession, Miyuki and Kaguya set out on a mission that puts their dignity as Elite students at risk. Their daily shenanigans begin the struggle of love!

The latest anime you can watch is Horimiya, a comedy, slice of life animated series. Miyamura has a humble and aloof manner that is compared to Hori’s combination of intelligence and affluence. In a fateful meeting, both of their hidden personas are revealed.

A piercing and several hidden tattoos adorn Miyamura’s body, giving him the appearance of a kind delinquent. While they possess completely opposite dispositions, they become friends and spend a lot of time at Hori’s house together.

Despite having a sweet voice and a cute appearance, Queen Aharen is not very good at recognizing personal space and distance. Her proximity to your face is sometimes inches, and other times her distance is miles! Raidou Matsuboshi, who sits next to her in class, is the only one trying to understand her. Although he looks menacing, he is actually a kind boy who has an imagination that can go off the rails at times.

In Aharen-san wa Hakarenai, a strange friendship blossoms as Raidou takes Aharen’s eraser. Apparently, she misunderstands his gesture and thinks that the two of them have become best friends, demonstrating how even the simplest things can prove to be the most difficult challenges they face.

4. Don’t Toy with me, Nagatoro-san

Don’t Toy with me, Nagatoro-san is similar to Komi-san can’t communicate, with just two roles reversed. Naoto Hachiouji is mercilessly teased by Hayase Nagatoro, a first-year student she met in the library while he was working on his manga. Playing with him from then on, was always her favorite thing to do, even calling him “Senpai” instead of his real name.

At first, Nagatero’s constant antics annoy and humiliate him. After spending more time together, however, they form an odd sort of kinship, and Naoto finds life with Nagatoro not only tolerable but even enjoyable.

The comedy anime RELife incorporates a splint of supernatural elements that are usually not found in slice-of-life anime. Arata Kaizaki is presented with a mystery pill by Ryou Yoake, a member of the RELife Research Institute, which changes his life completely.

When Arata awakens the next morning, he notices that his look has returned to that of a 17-year-old. Upon discovering he has been selected as a subject of a one-year experiment, Arata is mandated to attend High School as a transfer student.

The superior life experience Arata has doesn’t help him stay up to date, as he fails all of his tests, is out of shape, and can’t keep up with all the new school policies that have been introduced in the last decade.

The film Your silent voice is so amazing and popular that nearly everyone is familiar with it. In a playful frenzy, Shouya and his classmates bully Shouko Nishimiya, who is deaf.

In response to her mother’s disclosure to the school, he is singled out and blamed for everything. With Shouko’s departure from the school, Shouya now finds himself at the mercy of his peers.

Teachers turn a blind eye to his heartless ostracization throughout elementary and middle school.

Shouya is still haunted by his youthful misdeeds as he approaches his third year of high school. Having vowed to make amends for his previous sins, he set out on a redemption mission to meet Shouko again.

With its brilliant animation, Hyouka is another slice-of-life anime that will enthrall any viewer. In joining the Club at his sister’s request, Houtarou Oreki finds out that the club has a rich history, and that the club so far has been a success with a profound history.

With the help of other members of the club like the wise Satoshi Fukube, the stern but kind Mayaka Ibara, and the inquisitive Eru Chitanda, not only does Oreki battle deadlines and a lack of information with resourcefulness and hidden talent, but he also discovers the truth buried beneath the dust of works created prior to them and of other minor side cases.

Despite being well known, Sekimen Shinaide Sekime-san is the only one who notices his girlfriend’s flush! This romantic comedy features a boy and his very shy and self-conscious girlfriend!

I think this is the only action anime on the list and also the only Ecchi one. In response to demons’ increasing threat, Odin dispatches valkyries to help defend the earth. For these foes to be defeated, 9 valkyries disguised as Saotome sisters advance to higher levels by doing various romantic actions with Einherjar, their official boyfriend.

Meanwhile, Yakima Akutsu, a timid and shy guy, discovers that Odin has chosen him as the Valkyries’ lover. Even though he is frightened of the sisters, he offers to let them stay in his large, empty house to assist them.

Kai, her best friend, cuts ties with Bocchi so that she can promise to re-connect with her once she has become acquainted with everyone in her new middle school class, in an attempt to get her out of her shell.

She hopes to rekindle her friendship with Kai despite her lack of confidence in herself. She summons all her strength to overcome the challenge of making friends with everyone in her class, starting with the delinquent girl in front of her…