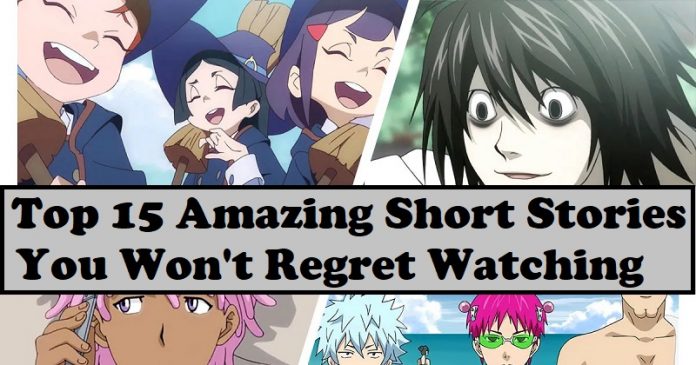 With our overloaded schedules and impossible work timing, it is almost impossible to binge. For once even if you decide to binge, it becomes a nightmare to find a series with good content and fewer episodes. You always find a series with hundreds of episodes whereas you just want to chill with some elite slice of content but worthy of just one night. So, here we are with a striking list of short anime series you won’t regret watching.

I bet that after watching this series you will be obsessed with babies. Gakuen babysitters present a heart full part of life that fills you with love and happiness. The concept of the series is not something out of the blue but the execution makes it wholesome.

The story is about Ryuchi and his baby brother. They live a comfortable life and Ryuchi is employed in a part-time daycare center. As the series progresses you will literally be fond of the brothers and their tender connection.

14. I Can’t Understand What My Husband Is Saying

This series is a short with every episode of just 3-minutes. It is about a normal working lady who has been wedded to an otaku. Her husband frequently writes about blogs and uses otaku terms. The lady tries her best to understand him. Even after the communication gaps, their story is filled with cute romantic gestures. You can watch this when you are in the mood for something short and light.

Another is a mystery thriller anime that holds your attention throughout all 12 episodes. It is about a high school boy, Kouichi Sakakibara who has recently been shifted to this school. Kouichi feels a gloomy and shady vibe all around the school. He also finds a girl named Mei who is ignored and not liked by anybody in the school. Mei and Kouichi come close even after several warnings and it is only after this bond that he finds out the secrets this town is hiding. For people not up for violence or gruesome murderers, this is not for you.

The plot follows a student named Seki who is in his own world during most of the lectures. He knows exactly how to deal with a monotonous lecture by building rockets, volcanoes, and many more other experiments in his head, he just has to. While no one knows about his imagination, his desk mate Yoko does. She has a hard time concentrating in class. This is a series from another world weird but interesting.

Charlotte is like a low-key version of X Men. The plot may seem light – hearted but it is dark.

The story starts with a meteor shower giving power to some teenagers. Yuu, the protagonist in the first glimpse, seems like an innocent boy. But you are wrong here, You can possess any human for 5 seconds and up till now, he had been using this special power to his benefit. However, Nao finds out his secret and drags him to an academy that looks out for the safety of the powers and those who may exploit the power.

Angel beats is an emotional roller coaster created by Jun Maeda. This series will keep you up all night and will leave you thinking. It is a combination of various emotions that humans can feel and experience through numerous events. You will need tissues for this one, but it is a must-watch.

Terror in Resonance is a dark anime but trust me you will love it. Two young boys steal a prototype of a highly explosive atomic bomb and are on the hurdle of threatening the lives of the common Tokyo citizens. This story is based in a dystopian world.

To survive the citizens had to solve a riddle that was released through media, if solved the attack would stop.

KonoSuba is an Isekai anime that is hands down hilarious. Kazuma is given the task to save the world and defeat the Devil King. The Aqua goddess offers him various stats as options. But Kazuma chooses Aqua herself.  But, Aqua was not a powerful goddess, she was not useful. Throughout the series, he meets different weird people. This series is an explosion maniac.

This is an alluring and unique series that reels in the audience with its exhilarating plot line and aesthetics. Like all the cultures of the world believe that souls have to face a final judgment. However, the twist here is that the souls have to play a Death Game, and the results of the game would be decided whether the soul gets reincarnated or banished into a void.

91 days is the underworld mafia series you were looking for. The story line follows the revenge tale of Angela Lagusa. Her entire family was brutally killed in a mafia fight. This act was done by a rival family and Angela sets out to avenge her family when she receives an anonymous letter. She befriends Vanetti family’s son, Nero.

I don’t know why but people seem to not appreciate this show enough. It is a hilarious masterpiece with bizarre as a subtitle.

It is about three girls who study in an all-girls academy. These girls are a part of a time-pass club and the activities of that club are always super weird. The activities have to be out of the ordinary to such an extent that people start crying out of laughter.

Erased is a series that will fill your heart with empathy and love. Satoru is a boy who possesses the ability to travel back in time. He uses this ability to travel 18 years back to save his mom from a horrifying murder. When he is back in time, he sets out to correct everything that went wrong that time.

This series is a wholesome and hilarious one. Taking a break from our routine lives and scenery change is what we all look for. Similarly, Seishu Handa also needs a break.

Seishu Handa is a youthful calligrapher and is in the oblivion of his true self. This identity crisis gets so much into his head that he punches one of his elderly custodians. As a punishment, his father sends him down to Gojo island. When on the island, Handa meets and interacts with the island people. This lively time he spent on the island helped him find inspiration.

If you are looking for a sports marathon, this is your jam. Ping Pong is an excellent sports series with skillfully drafted scenes and an intriguing story line. Every minute of the series is worth it because of its competitive vibe and enriching character development.

Violet Evergarden, a beautiful girl immensely similar to a porcelain doll was raised to be a war weapon that could kill thousands of enemies. She was brought up in such a way that she did not understand human emotions.

After the severe bloodshed, she was stranded alone with just the last words spoken by her beloved person. Violet then started a new life as a typewriter. She connected people’s feelings by the means of her letter. Through this, she slowly started to acknowledge and appreciate human feelings.

For this one, you will have to grab some tissues and ice cream near you, because this is surely going to make you cry a river.