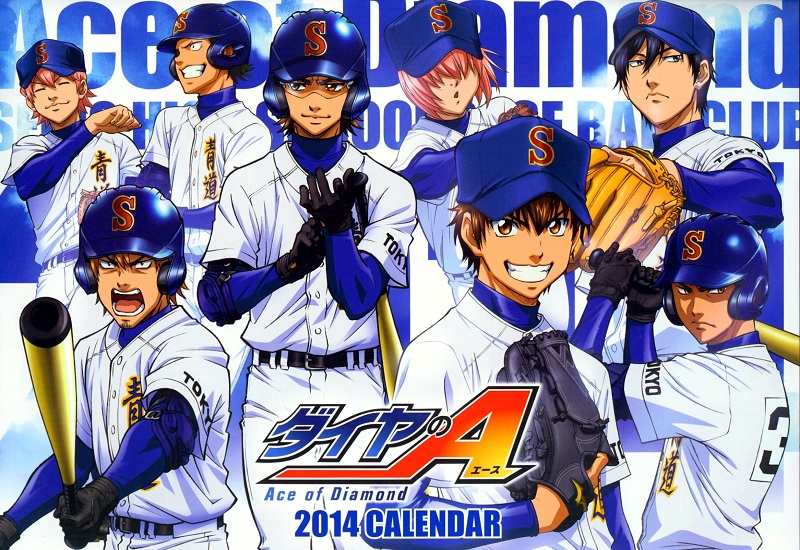 Diamond no Ace has made me appreciate the competitive skills and enthusiasm athletes put into their work, either professionally or in just training.

The energy and time these players invest in improving their pitches and batting during training sessions was the main motivation for us to create this list of the 10 Best Baseball Players in Diamond no Ace.

A second-year student in Seidou High School and the younger brother of Kominato Ryousuke is Haruichi Kominato. He plays as the second baseman and is the team’s one-half of Keystone Duo.

Haruichi is known to be a very calm and composed person. He is a shy person but still is in the habit of bluntly putting forward his opinions.

The most unique feature about Haruichi is that he plays with a wooden bat instead of a light metal bat like the others do. This was because he believed that if he wants to be at par with his brother he needs to use a heavier bat.

A student of Inashiro Industrial and the lead player in Inashiro’s batting sequence is Carlos. He is a man who can look after the others, but his thing of instantly getting nude in the dorm room, makes the others around him take care of him.

We see that he has an unusual posture when batting and prefers to go in his own rhythm. Players like him who possess superior levels in defense and making the optimum use of his speed are said to be very few even when considering the Kanto region. Carlos is also known for hitting fastballs.

He is a talented pitcher and is the pride of the Yakushi. At the initial stages, he wasn’t so enthusiastic about baseball or training but after his encounter with Todoroki Raizo and Raichi changed his whole lookout towards baseball.

Pitching is his passion and he is a strong inspiration for his teammates because of his determination towards pitching and batting. All the other team members are delighted and all energized due to his strength and zeal.

He is known to be a joyful and interactive person but on the field, he is totally on fire.

Amahisa is known to be a very confident and talented pitcher who is not delusional even when standing against stronger batters than him.

He is a player who thinks a lot during a match, trying to analyze realized not only his opponent but himself as well.

He also has this habit of keeping himself busy with only great batters like Todoroki Raichi and would not give a thought to the other, which could have some negative consequences.

Contradictory to this, we also see that he possesses immense respect for all the players from other teams as well.

Amahisa is an incredibly skilled pitcher and is a master of almost all aspects of pitching.

He is also the unmatched fourth batter and also takes up the alternate pitcher position.

Raichi is a player with extraordinary athleticism and is known as the best slugger of his generation.

His ultimate strength resides in his batting powers, his homerun output is the best in the series. He can also play as a makeshift pitcher.

The protagonist of the series who comes from the prefecture of Nagano is Eijun Sawamura. He used to play baseball at Akagi Junior High.

He is a left-handed pitcher who has been given a promotion from the second string to the first string at No. 20 for the Summer Tournament and later on shifted to No. 18 at the beginning of the Fall Tournament.

His strengths are his unfailing spirit, bunting, infield defense, and distinctive pitches. His weaknesses at the initial stages were batting, pitching control, and outfield defense. However, from second-year onwards, he started considerably improving himself in all the weak areas.

A second-year student at Komadai Fujimaki and an ace of the Komadai Fujimaki’s baseball team is Hongō Masamune. He is known to be the youngest spectacular pitcher of the Hokkaido Prefecture that is to what we know the best of his generation.

Hongou is a power pitcher who can throw fastballs at 150 km/h and reaching a maximum of 151km/h. His arsenal consists of the Slider and the Splitter, his famous winning pitch which is unhittable because of its uncanny resemblance to a fastball.

We know that Inui has come back to school after being a part of the Nippon Professional Baseball (NPB) team as a catcher for two decades, so obviously, his physic and appearance are opposite to each other. The first look you have at him, he would look like the coach of the Inashiro Industrial baseball team.

However, when you closely examine you find out that he is too old to be a high schooler and people are always placing random guesses on his age. Regardless, he possesses amazing pitch-framing skills and is as talented as Narumiya when it comes to catching.

His excellent catching skills helped him catch Narumiya’s upgraded change-up. Also, Inui can easily adjust to a place where he is allowed to play with the strike zone with depth and still manage to catch his pitches.

Student of the Inashiro Industrial and the school baseball team’s ace. He is known to be the best left-handed southpaw pitcher of the Kantō region and probably the best of his entire generation.

He is also called “The Prince of the Capital” taking in consideration his mind-blowing performance in the 89th Summer Koshien.

Narumiya is a young and confident individual who feels that he is allowed to be selfish because he is the pitcher of the team. He is a player who does not like to practice but of course, does his best when he thinks training is important.

Following Inashiro’s defeat before the series, Narumiya came to the realization that he needs to practice more and work on his mistakes.

A student of Seidou High, captain of the Seidou High’s baseball team, and a regular catcher – Miyuki Kazuya. He is a nationally well renowned catcher.

His Coach Kataoka claims that Miyuki’s skills are a “pivotal part of the team”. The other team coaches also show their high regard towards his natural baseball feel, which is quite unordinary among other players.

He is known to have a good judgment on when to take action or play defense.

Miyuki is also very talented when it comes to drawing out the potential of his other team members and really keeps a lot of faith in his pitchers. When it comes to his catching skills, there is maybe no one who can match up to him, he rarely lets any balls pass by him.