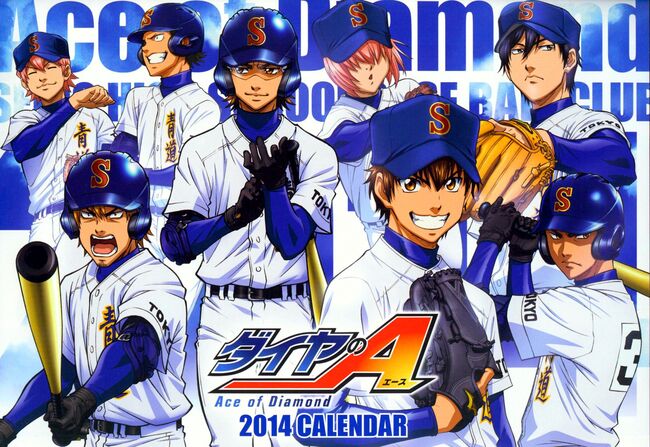 There are various outdoor ball games that can take the hell out of you, all sweating, adrenaline rushing, and the ever-rising competitive spirit. Games like basketball, baseball, and softball are such kinds of sports.

Diamond no Ace is a baseball series showing a group of intensely competitive high school boys playing fierce matches. Without any further ado, dive into the list of the 10 Best Pitchers in Dimond no Ace!

You can watch Diamond no Ace on Crunchyroll.

Akamatsu is a third-year student of Ritsurin Junior High, a calm pitcher of Inashiro Industrial, and the ace player Minamisawa Senior League. His first official debut match was at the Kanto Tournament, he had a velocity of 130km/h and scored 6 successive strikeouts at a single out.

While playing against Ritsurin during the Spring Tournament, he somewhere sensed that the opponent player would play against his team. With quite well-planned and strategic thinking, Akamatsu explained his plan to his teammates.

Furuya Satoru is from Tomakomai, Hokkaido. He is a second-year student in Seidou High School and was the former Ace of the Seidou Baseball Club from his first year Fall Tournament to his second year Spring Tournament. At the present moment, he has the No.11 from the Summer Regional Tournament.

Although he is a thin individual, he is a strong thrower and a strong slugger and is one of the best distance hitters. He is capable of catching flying balls and throwing them back to the home plate because of his strong throwing arm. If not pitching, he would be seen playing the left field. Thus he is a well-rounded player and his pitching skills are par excellence.

Similar to Furuya and Hongō Masamune, Akashi has an immensely strong pitch. Though his control is average, his lower body muscle strength and professionalism enriched his whole portfolio. He is 4th in the batting line, his skills speak loud enough for himself. His swings and long stride lengths are amazing. Considering the bat control he is as good as Kominato Haruichi.

He lost multiple times because of his elbow injury in his second year, because of this he was also shifted to the position of batting in his team.

Student of Seidou High School and a catcher of the Seidou High School Baseball Team is Onō Shintarō. His eye catching trait as a catcher is his concern and meticulous deliberation towards the team pitchers. Although he has had trouble with catching Sawamura and Furuya’s pitching, however, Ono has still somehow managed to keep up with them.

Ono is very professional at his catcher’s job like saving the runner on base. Being a catcher he prefers playing safe and enhance the pitchers’ hold on the ball.

A student from Teito High School and one of the top players in the baseball team is Mukai Taiyo. He is a left sidearm pitcher and made his debut at the 89th Summer Koshien. Being a sidearm pitcher he is pretty confident and his skills are unbelievable and that is what makes him the number one pitcher of his generation.

Pitching is an amazingly enjoyable thing for him since middle school or you can say he is literally addicted to it. His pitches are extremely hard to hit and batters can get serious get stuck with the low pitches.

He is a passionate pitcher and is the sheer inspiration for his other team members because of his strong pitching and batting. Also, his strength and passion lit everyone else in the team. He is a cheerful and sociable person but on the pitch, he is nothing but a monster.

Amahisa Kōsei’s intense speed and unhittable pitching make his level an MLB. this in turn makes up for his not-so-good batting and hitting abilities. His greatest strength is the fact that he got his slider under control. But just sometimes he has trembling openings, poor curveballs, and weak change-ups as he lets his guard down.

However, once he gets back together, he is much better than Hongō.

The protagonist of the series and the one from the prefecture of Nagano is Eijun Sawamura. We know him as a left-handed pitcher being promoted from the second string right towards the first one as No.20 for the Summer Tournament, and later on No.18 in the initial moments of the Fall Tournament.

His power resides in his flawless spirits, infield defense, and his distinctive pitches. His weaknesses at the start were batting and outfield defense. From the second year onwards, he has improvised a great deal in the speed of his pitches and their control.

A second-year student from Komadai Fujimaki. He is also known as the ace of Komadai Fujimaki’s baseball team and is popular as the young outstandingly talented pitcher of the Hokkaido Prefecture of his generation.

He is a serious and intense personality who has complete confidence in his skill and hates even the idea of losing which can make him dismissive and rude.

The best pitcher in Dimond no Ace is Mei Narumiya as he is renowned as the Prince of the Capital and an idol 3rd-year pitcher who has an extremely amazing velocity and control.

His immense speed gives him an upper hand over Hongō. The slider Mei possesses is the second best, after Amahisa’s slider. We see his mind-blowing performance in the 89th Summer Kōshien because of his mastery in fastball pitch, change up, slider, and forkball.

However, considering that he has already lost his exclusive style twice, Mei’s two drawbacks are his mindset and inactiveness. Despite the fact that Mei is a southpaw and has a huge arsenal of breaking balls, he needs time to catch up.