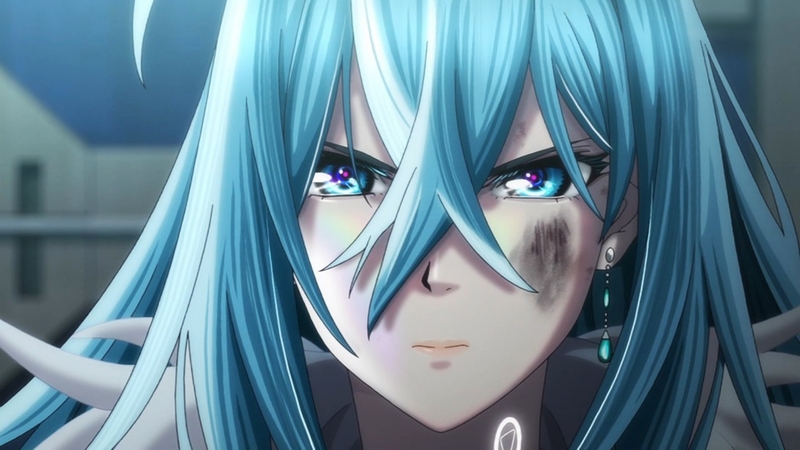 This series is created with a pure atmosphere, beautiful scenery and well-rounded characters and these are the USPs of it. Though Vivy: Fluorite Eye’s Song has a vibrant premise and looks good, it interestingly is a dark series.

This series is a sci-fi thriller that has a touch of the ominous and threatening side of AI and has a huge dramatic influence on human society.

However, its approach is not beyond the ordinary but it has a deep plot exploring concepts of time travel and Artificial Intelligence. Still, even with the amazing animation, the story is somewhat flat when it comes to balancing the premise and characters.

Now, if you are looking to watch Anime like Vivy: Fluorite Eye’s Song, here is a list of 6 similar anime series.

The citizens of Japan in the 22nd century are being rules by Sibyl System and the Enforcers.

This is a system and is used to investigate a person’s mental profile and it also determines the probability of a person committing a crime.

Psycho-Pass is shown as a device that can compute a person’s mental health, stress levels, and emotional state.

A person is regarded to be a vulnerable individual according to top this device, there is an immediate action order released by the Sibyl System.

The protagonist Akane Tsunemori is the Sibyl System’s newest officer and she is the one who puts up questions regarding the relevance and use of the technology considering the consequences of humanity.

The lead character of the series is Madoka Kaname who is a high school girl. One day she saw a weird dream about a cat-like thing and a gigantic creature.

The very next day she discovers that the creature from her dream is Homura Akem who is a new transfer student in her school. After school, that day Madoka along with her friend met Kyubey the similar cat-like magical creature which was attacked by Homura Akemi.

Once they save Kyuney from her, they are offered a contract to become magical girls that fight witches in exchange to get any of their wishes fulfilled.

They ultimately make the decision to accept this offer and become magical girls but Madoka soon gets to know that this is not any ordinary job.

The plot of the series shows a world that has been hit by an ecological disaster and the planet has been doomed for more than some thousand years now and the people live in these destructed cities.

We know that these cities are being rules by Regents who are members of the governing council. The city in focus is called Romdeau, it is special because humans and androids co-exist in this city.

Nonetheless, the peace of this city doesn’t remain very long and is disturbed by the continued strike of murders that are being committed by AutoReiv. These murdering AutoReiv are diagnosed with the Cogito virus.

The Regent’s granddaughter Re-l Mayer is given the responsibility to investigate these murders and this leads her to the darkness no one ever saw.

The world shown in the series had some energy problems but in 2072 these problems were solved through a network of cross-dimensional electromagnetic induction devices, these devices were called coils.

But of course, there are some people who use these coils for destructive intentions. Kyouma Mabuchi is a man who is not at all in favor of these coils, so he finds some coils acquires them illegally in exchange for money.

One day while he was hunting he encounters a unique coil android named Mira and this changes his whole life.

The continent of Telsis has finally attained peace after four years of a long destructing war. Both the nation and its citizens are healing from the aftermath of this colossal war.

The protagonist of the series is Violet Evergarden, a young female ex-soldier. After this war, she seems to have lost all purpose in life and begins a fresh life at the CH Postal Company with the intention to regain purpose in life.

The world in Time of Eve shows the Robots and Androids have become an important part of everyone’s lives. The lead character Rikuo Sakisaka has one such robot named Sammy. However, he has recently noticed some weird behavior in the robot.

So, he browsed through his robot’s activity log and finds something saying  “Are you enjoying the Time of Eve?” Intrigued by this Rikuo and his friend Masaki set to search the reason behind this.