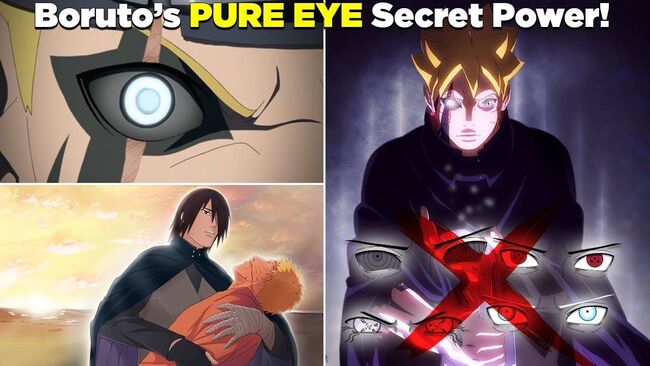 In the Shinobi world of Naruto and Boruto, the techniques and spells used are siphoned by the chakra- this is called Ninjutsu. Ninjutsu is tightly tied with the Naruto franchise.

Ninjutsu techniques have become so famous that the characters Naruto and Boruto are merely identified through them. Now you must be wondering which technique can it be? This technique is the Dojutsu or the Eye Technique.

We all already know about Naruto’s Dojutsu techniques, but Boruto’s right eye is still intriguing and a mystery. To solve this mystery for you and give answers to your curious mind, here is Everything you need to know about Boruto’s Jougan.

Boruto’s Dojutsu is known as the Jougan. However, there is no explicit indication or information in the anime but the manga panel translation results in the name ‘Jougan.’

The Jougan primarily gives Boruto the power and ability to see and sense chakra, the whole pathway of the system, and also enables him to spot the invisible barriers in different dimensions. The Jougan is also known as the “Pure Eye.”

Officially there is no information that Boruto’s Dojutsu is called Jougan. But from the picture that Chengxi Huang an animator of Boruto: Naruto Next Generations had to with the text Jougan.

I. What is Jougan?

The Jougan is Blue colored with Black Sclera and Halo surrounding the pupil. There is a striking similarity between the Toneri’s Tenseigan and the Jougan in terms of appearance. We already know that Boruto has some control over the eye as the fans already saw Boruto in a flash-forward.

Also, during the final battle Momoshiki predicts “Those blue eyes of yours will take everything from you.” There is a possibility that the blue color is more than just the eye color.

Normally, the Dojutsu is activated at a mature age, but in Boruto’s case, the eye is activated at a very young age. This unusual activity brings its origin and powers under question. The eye may activate involuntarily at the initial stages, especially when Boruto focuses on any particular thing whether object or person. Though the powers haven’t yet been revealed, but the fans do have some theories about Jougan’s ability.

First, the ability to see and sense all types of chakras.

Second, the ability to activate automatically when in dangerous situations, as we know that Boruto doesn’t have complete control over the Jougan.

We all know Toneri Otsutski as the main antagonist in “The Last: Naruto the Movie” and as the last successor of Hamura Otsutsuki. He was also the only one who survived the Otsutski branch on the moon.

The Tenseigan belonged to Hamura Otsutsuki. So, Toneri Otsutski activated his Tenseigan after stealing the Byakugan. This happened because Byakugan was a prerequisite for Tenseigan. This is now called the Reincarnation Eye which is very much similar to the Jougan.

V. Origin of the Pure Eye

We remember that Toneri says that his eye is the “Star of Hope” and will work against all destructive odds. During this declaration, he refers to Boruto’s eye as the Jougan.

Another theory is that Toneri might have altered Hinata’s DNA while the kidnapping of Hanabi. But as Toneri was interested in Hinata which posed a great threat to the earth. This alteration may have created the Jougan as we also see an unexplained interest possessed by Toneri for Boruto.

One more fan theory states the natural manifestation of the Jougan. The Jougan is the combined incarnation of Hinata and Naruto’s chakra within Boruto. Therefore, it wouldn’t be wrong to claim that Boruto’s eye is literally called the Pure Eye to eradicate all evil from the world.

VI. About Boruto: Naruto Next Generations

Boruto: Naruto Next Generations is an illustration by Mikio Ikemoto. Masashi Kishimoto has himself supervised this illustration. This Next Generation series is all about Boruto, his bringing up in the academy, and after it. We will get to see the whole maturing process of Boruto and all the evil battles he fights and wins.