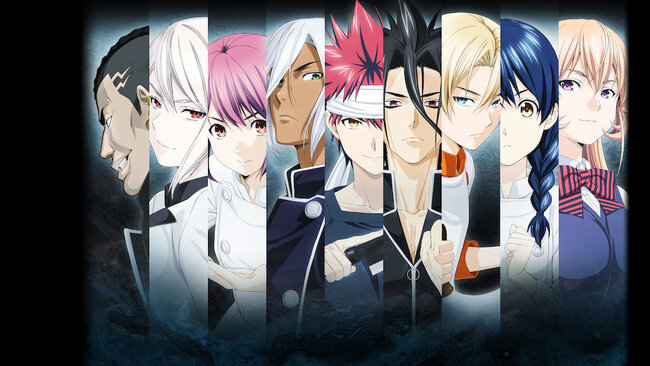 Food Wars!: Shokugeki no Soma gets fans hooked from the first episode, the main appeal being the food, how it’s cooked, how it’s presented(it looks so good that even the viewers want to try it).

The chefs cook delectable dishes and probably it is the strategy they use to cook them is what makes the food so mouth watering.

It can be said that  the manga writer Yūto Tsukuda, illustrator Shun Saeki, along with chef Yuki Morisaki created a show which would appeal to audience through a basic necessity, pleasing the taste buds of the viewers perfectly.

The ranking will be based on the character’s experience, cooking techniques, victories in cook offs and sometimes from their position in the Elite Ten Council.

The list contains the top 10 Best chefs In Food Wars: Shokugeki No Soma that concoct such appealing dishes that even the viewers want to get a taste of:

Ryō Kurokiba is known to believe that a kitchen is a battlefield and that this is where all food chefs get to make a representation of their power. He is a chef with knowledge of Molecular Gastronomy which no one has been able to surpass yet.

Molecular Gastronomy is a branch of food science where physics and chemical processes of cooking are understood and manipulated to yield flavorful, artistic and nutritional food.

He seeks the best spice blends to create European Seafood cuisine which will have the best and concentrated flavor.

He also has a head chef experience where he worked at a pub in Denmark. This experience made him notable for preparing crustaceans and lobsters. He is also admired for his seafood knowledge, knifing, and crushing skills by the fellow cooks at the pub.

Takumi Aldini is named the best Italian Student Chef in his current year by Engetsu Teahouse Culinary Academy because of his determination.

He was born and raised in Italy, boasting a vast knowledge of Italian cuisine. His food is always in demand at his uncle’s restaurant Trattoria Aldini.

With his younger twin brother Isami Aldini who is a researcher in the world of flavor and Takumi’s mastery of Italian cuisine, he seeks to prepare dishes that would crush Soma Yukihira in a Shokugeki Challenge.

Among his many impressive specialized skills, one is crushing and forming paste using the Mezzaluna Mastery technique: he uses a crescent shaped knife to pound dough into fettuccine paste in just seconds.

He is regarded as the superior chef between him and Isami by the patrons of his uncle’s restaurant.

Akira Hayama’s main technique is that he uses his nose and the olfactory senses of the judges to engross and captivate them into making him the winner in any cook-off tournament. He also uses spices on his food like Kurokiba to appeal to his tasters.

His mastery in aroma made him hold the 9th seat in the Elite Ten Council, invoking that his nose is his main strength and that he can combine fragrant but strong smells and delicious but spicy tastes of his dishes harmoniously.

Hayama expresses himself through his dishes very well, he gives his all during cook-off tournaments the same way his dishes combine the strong and complex spices.

Isshiki is a master of traditional Japanese cuisine and he also has mastered eel preparation.

His cooking techniques are also traditional as many of them were passed down to him by his family who are old money rich.

One of his very special techniques is family special Ferociously Aggressive Japanese cuisine.

He’s good friends with Sōma Yukihira and resides with him at the Polar Star Dormitory. When Yukihira tasted his dishes, he compared Isshiki’s cooking ability to that of a superhuman.

Isshiki was good enough to be the 6th seat holder of the Elite Ten Council, but didn’t get the position because he did not go all out and become serious in his cooking.

He often hides his true potential in cooking and because of that most people don’t perceive him to be one of the strongest chefs in Engetsu’s 91st generation.

Nakiri can be considered to be very regal and creative with her cooking. She displays these attributes with original dishes such as Ravioli Di Aragosta and Eggs Benedict.

She is well-known in the culinary world for her “God Tongue,” which is said to make or break a chef’s career. Just her name invokes terror in her competitors.

She only uses high quality ingredients to cook and with her fine palate, she rivals Sōma Yukihira.

Her culinary skills already are at par with that of a professional chef. One of her tasters even commented that her food “makes you feel a hundred years younger”.

He was the former holder of the 1st seat in the Elite Ten council. His natural ability lies in flavor where he is able to create comprehensive but unique flavors while blending them in multiple ingredients.

He is titled as The White Knight of the Table(his flavors are feel as though the chef is nowhere in the dish, it’s the dish and the dish itself) but this also parallels his main strength’s that he “paradoxically places himself in his dishes without intending to”.

Sōma Yukihira stated that Tsukasa’s Nine Course Meal during the Moon Banquet Festival was “fun and satisfying” because he blended and created unique flavors while extracting the ingredients the best way.

Tsukasa won against the president of the Chinese Cuisine Society proving his top position at Engetsu.

His nickname The Légumes’ Magician stands true as he is well known to have casted a spell on his whole dish to entrance tasters and judges on his French cuisine.

He is a world renowned Japanese chef who won his first French award that established him in elite society: the greatly desired Pluspol award.

After graduating from Engetsu, he opened his first restaurant in Paris and he won the Michelin Star being the sole owner of the restaurant.

He was also the former 1st seat holder of the Elite Ten Council, he acquired culinary logic, live cooking adaptation, and ingredient knowledge to increase his already magnificent cooking skills.

This man has never once lost a Shokugeki, and his love for cook-off challenges clearly bleeds through. He is known as a  nomadic but a Master of cuisines chef globally.

Very few are aware of his short lived fame in the past and he is looked up to and admired for his prodigious chef persona by those people.

He has knowledge about various ingredients and he has various cooking styles which helped him create the Yukihira Style, which is now used by Sōma Yukihira.

He was able to create the Jōichirō Special Rich Ramen, which is said to revitalize the body and make one feel and look younger. It is all due to his live cooking adaptation and culinary logic and creativity.

Saiba stands out from the rest because- he has defeated Jōichirō and that he collects knives.

He only collects knives which he got from winning cooking competitions. He bets with his opponents to give him their culinary knives because they lost on multiple cook-offs with him. This amplifies Saiba’s natural power.

He bases his ability on Cross Knives, a superhuman ability that increases the knives’ skill of essence absorption and he is not fussy about his cooking style.

No wonder he has a special place for knives in his heart. He is one of the greatest chefs of his generation, this brings him a lot of relevance and respect.

He is also a member of the Les Cuisiners Noirs, a group of chefs who are hired by criminals or criminal groups. This makes many fear him too.

Sōma Yukihira is the best chef in the Food Wars Series. He is only a 15 year old high school student who’s extremely passionate about cooking.

His resourcefulness and unbridled creativity help him improvise any unheard-of-recipe on the spot.

He has vast culinary knowledge and his various food ingredients only complement his ability in the kitchen.

He also sometimes amazes the judges by using very simple and affordable ingredients from the supermarket. He uses the Yukihira Style passed down to him by his father who created this cooking style.

For him, Engetsu is just a stepping stone in his long journey and future endeavors.

Since he grew up with his father in a diner who is a world class chef already, he is a great sous chef and he is incredibly skillful in preparing and serving Japanese cuisine.

His father’s knowledge of French cuisine also has a great influence on his taste .