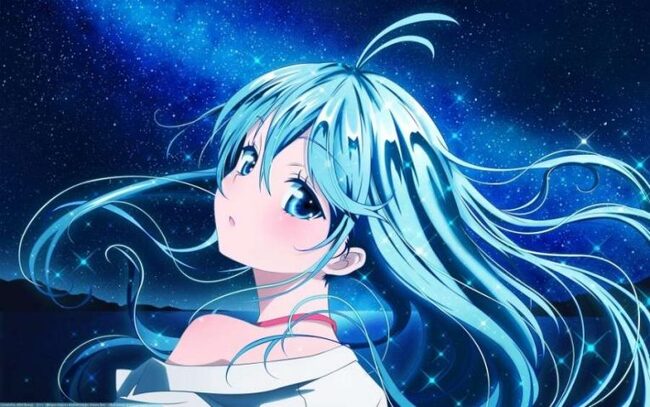 No amount of make-up or material substances can match the level of beauty of a girl as much as her pretty hair and her unique qualities do.

Anime are no exceptions, they too are well-known for female characters who have astonishing qualities that makes us fall for them, and their vibrant hair colors as well.

Let us introduce you to few such characters that bewitch the anime watchers and hold a place in their hearts.

Some characters grab our attention even before we know much about them, maybe they do it by being cute. The anime ‘Asterisk War’s has one such character named Sasamiya Saya.

She is the childhood friend of the protagonist Amagiri Ayato. With her light blue short hair, astonishing red eyes, short height, intelligence and her command over scientific weapons she castes spell on her fans.

The main character of the anime ‘Masamune Kun’s Revenge’ named Aki Adagaki with her ‘Tsundere’ attitude is much admired by her fans. Gleaming eyes of the color blue with navy blue hair adds to her appearance.

She is a round character. Her personality constituting of mocking boys who approach her to confess their love adds to her being titled as ‘the cruel princess.

Spellbinding fans with her appearance and her quest of adhering to justice is the character of Suzuno Kamazuki in the anime ‘The Devil is a Part-Timer’.

She is a kind-hearted girl helping and taking care of people around her, even if they aren’t worth caring for.

She has lovely Persian Blue color hair and stunning aqua eyes. The powers of ‘Sleep Magic’ and ‘Enhanced Strength’ also attract the viewers and she possesses a calm aura.

Asada Shino, the supporting character in the anime ‘Sword Art Online is admired by the fans for the skills she possesses, her unique cuteness and the prevailing sense of support that she provides to the protagonist.

A tragic incident turns her into a more reserved and shy nature. To overcome her fears and anxiety, she indulges herself in virtual games.

The anime ‘The Ambition of Oda Nobuna’ has a supporting character named Niwa Nagahide whose name needs to be mentioned in this list.

A girl with glowy green eyes, glittering dark blue hair and a strategist of the Oda Clan. She is a kind and helpful heart who tries to cheer up the female protagonist and the other characters when they are stressed or tensed.

She is skilled and a brave girl influencing the triumph of the clan. She shines the brightest amidst all the stars around, she is beautiful, faithful to the leader, her outfits are a class apart.

She battles fiercely and who doesn’t fall for such amazing characters!