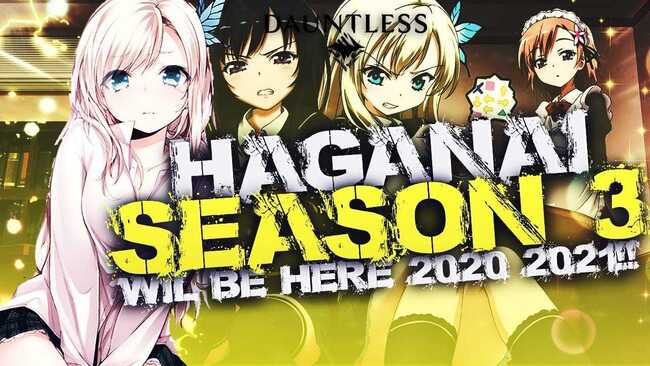 Haganai: I don’t have many friends was a huge success but after the end of it’s run in March 2013, fans are eager for a new season. Haganai started in fall 2011 and concluded the 2nd season in 2013 with no updates about season 3.

The protagonist, Kodaka Hasegawa is very pleased to know that he will be transferring to a new school and is excited to have a fresh start.

He is very excited to make new friends, but he was soon labelled as a delinquent in his school due to his appearance. After being rejected from all social groups, he decides to make a new club inviting students labelled as outcasts along with him.

This is a heartwarming comedy with relationship twists and it is the perfect anime for a late night binge.

Season 3 for Haganai: I don’t have many friends is yet to be announced. It can be expected that the anime will air sometime in 2022 or later. Only 8 volumes out of the 11 volumes in the night light novel have been adapted into the anime.

The chances of Hagani season 3 are slim due to the lack of enough source material and since season 2 aired last in 2013. But season 3 still hasn’t exactly been cancelled, so there is still hope.

The season 3 of Haganai might probably be the last season since it’ll be adapting the volumes 9-11 by which the light novel ends.

Season 2 brings all the members of the neighbor’s club closer, they visit an amusement park together, play several games, and celebrate several birthdays.

The main challenge they faced was the school festival, which acted as a catalyst for a change in their relationship. He realized who his real friends were when he was invited to be in the student council member, he turned it down and returned to the neighbor’s club as they were the ones who stuck with him through thick and thin.

Haganai: I don’t have many friends.

It is an anime about Kodaka Hasegawa, who transfers to a new school and is pleased because now he will have an opportunity to make many friends as he didn’t have any friends in his previous school.

This anime is an ecchi, slice of life and comedy anime produced by AIC build under the direction of  Hisashi Saitō.