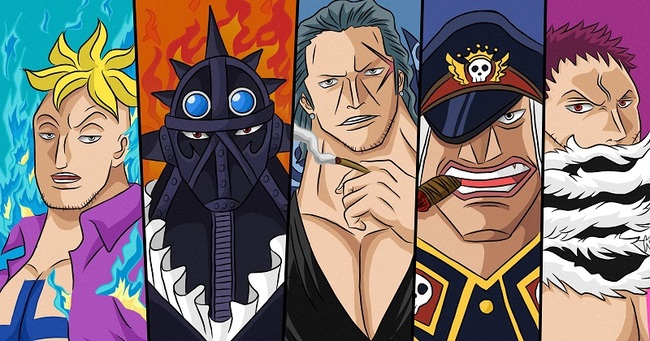 Whitebeard’s death after the war at Marineford was the end of an era and a new Yonko, Blackbeard came into power. They are currently the main focus of the One Piece universe but there is another massive plan going on which might cause the fall of another Yonko.

Luffy and the team are currently working to take down Kaido, another Yonko, but there are big hurdles in their path. They have to go through the beast pirates and their commanders.

The following list contains the top 10 strongest Yonko Commanders In One Piece they compare to each other.

Jack the Drought is an All-star member of the Beasts Pirates. He is also one of the three closest confidants of  Kaido known as the Three calamities along with King and Queen.

He is the ruler of the Kuri region in Wano country.

Being from the heritage of fish-man, Jack is the owner of enormous strength and superhuman endurance.

He is highly proficient in dual-wielding Shotel blades and combat on par with two of the strongest Minks one-on-one, Nekomamushi and Inuarashi.

He even managed to sink two Marine battleships and it took a whole fleet which even had Vice Admirals and Admirals and even though chances were unlikely, he survived the battle.

He ate the Zou Zou no Mi: Model: Mammoth, an ancient Zoan class Devil Fruit that gave him the ability to transform into a mammoth or a hybrid mammoth.

With this power, he can level part of cities by merely moving his trunk. His strength increases but his attacks become slow and heavy and he isn’t able to hit his enemies with speed.

Despite being incredibly powerful, he is still weaker than his fellow All-Stars and due to this, he is ranked in 10th place.

He was the Whitebeard Pirates’ 3rd division Commander and had been a member of the crew for three decades.

He is one of the most prominent members of his crew.

His achievements in the war prove that he is one of the strongest Yonko. He has strength that is capable enough to fight and hold his own against Shichibukai and also Marine Admirals.

He has a massive body and even after that his speed and agility and reflexes are on par with his superhuman strength.

This speed, combined with his Haki, makes Jozu a very dangerous enemy to the Logia users.

He ate the Kira Kira no Mi, a Paramecia type Devil Fruit that gives him the power to transform his body into a diamond.

When he is transformed, his defensive and offensive capabilities increase significantly, his physical attacks are enhanced because diamond is one of the hardest substances alongside Seastone.

He can endure the most potent attacks due to his diamond form as he was able to block an attack from the world’s greatest swordsman, Dracule Mihawk, and there was no visible damage inflicted on him.

His strength and feats in the war give him the 9th position on this list.

Yasopp is one of the members of Shanks’s crew which is implied to have the best crew among all Yonko. Despite the crew being smaller in comparison to other crews, each of its members holds great power.

Implying that knowledge, we conclude that Yasopp also holds great power. He is known as “Chaser” and is a sniper of the Red Hair Pirates.

He is marked as very notorious by the World /government and Marines. He is a remarkable marksman, so much that he can shoot the antenna of an ant 100 feet away.

Luffy has stated that he has never seen him miss a shot. He might be the best sniper in the world.

There is a lack of information when it comes to Yasopp, but his reputation and skills are enough to get him the 8th rank on this list.

7. Shiryu of the Rain

He is a member of the new Yonko, Blackbeard’s crew and he is one of the Ten Titanic Captains. He is the captain of the Second Ship, but he used to be the Head Jailer of Impel Down who got himself imprisoned on Level 6 death row for his excessive murderous violence against prisoners.

He was temporarily released to help Magellan quell the prison riot caused by Luffy and Blackbeard. He chose to rebel against the orders and join the Blackbeard Pirates.

Shiryu is considered to be equally strong to the Chief Warden Magellan. His speed is exceptionally formidable and he possesses superhuman endurance too. He is highly proficient with his Nodachi.

Shiryu ate the Suke Suke no Mi, a Paramecia class Devil Fruit which makes him capable of transforming himself and whatever he is holding become invisible.

He can cut opponents without them even suspecting. It is expected that his power will grow throughout the series and due to his strength and potential, he has been given the 7th rank.

He is an officer and combatant of the Red Hair Pirates. He was the one who found the Gomu Gomu no Mi fruit at the start of the series which was eaten by Luffy.

He is one of the most trusted crew members of Shanks, along with Benn Beckman and Yasopp.

Lucky Roo is believed to be a Haki specialist instead of a Devil Fruit user as it is assumed that just like Shanks, the members of his crew are pure Haki masters.

He is shown to possess incredible speed and stealth despite his massive build in the first few episodes.

Not much about Lucky Roo’s and his powers are known but it seems like being extremely powerful is one of the minimum requirements for becoming a part of Shanks’s crew. Therefore he is placed 6th on this list.

He is an All-Star member of the Beasts Pirates and is one of Kaido’s closest confidants known as the Three Calamities. He is the de facto ruler of Udon, a region in Wano Country.

He has a massive bounty of 1.3 berries on his head. He is undoubtedly one of the most powerful members of the crew. It can be even said that he is even more powerful than Jack.

Queen is a skilled craftsman who is particularly interested in the development of Mechanical Weapons and viruses. He built his own prosthetic arm as well as special ammunition contaminated with a highly infectious disease.

Apart from his craftsmanship, Queen is also shown to be strong physically. It was seen when he stopped a punch from Luffy and then tossed him away. He also possesses extremely fast reflexes and high durability.

He ate the Ryu Ryu no Mi: Model: Brachiosaurus, an ancient Zoan class Devil Fruit. This gives him the ability to transform into a brachiosaurus hybrid and full brachiosaurus at will. With this deservingly he is placed fifth on this list.

He is one of the Three Sweet Commanders of the Big Mom Pirates and he is the Charlotte Family’s Third child. He is the governor of Komugi island as Totto Land’s Minister of Flour.

According to his crewmates, he is the most powerful of the three sweet commanders and he is also the most capable member of the entire crew aside from Big Mom.

His physical strength is enormous and he is an extremely skilled hand to hand combat fighter. He hadn’t lost a single battle in his life until his battle with Luffy.

He ate the Mochi Mochi no Mi, a special paramecia class Devil Fruit that allows him to create, control and transform into mochi at will. He can also transform inorganic material into mochi.

He is one of the few people in the world who can make full use of all three types of Haki. His specialty being Kenbunshoku Haki, which allows him to see the near future. This grants him 4th place on the list.

He is an All-Star of the Beasts Pirates and is the most powerful of Kaido’s three closest confidants. He comes from a mysterious race that people believe to have gone extinct.

He ate the Ryu Ryu no Mi,Model:Pteranodon, an ancient Zoan class Devil Fruit. It gives him the power to transform into a hybrid of full pteranodon at will.

The Devil fruit gives him the ability to fly and execute extremely powerful attacks mid-air. He is also capable of producing raging flames and prominently burning everything around him.

He also is a very skilled swordsman, he was able to injure Raizo with his sword during the battle against Nine Red Scabbards 20 years ago. He is the strongest commander in the Beast Pirates and also the third most powerful Yonko commander.

He is the ex- 1st division commander of the Whitebeard Pirates and Yonko’s closest confidante and right-hand man. Marco was the one who led the crew after Whitebeard’s death until their disbandment after the Payback War.

He is tremendously powerful and it was shown in the Marineford War, where he could hold his own against Kizaru, Aokiji, and Akainu.

He possesses incredible speed and superhuman endurance. He can use Busoshoku and Kenbunshoku Haki proficiently.

He ate the Tori Tori no Mi, Model: Phoenix, a mythical Zoan class Devil Fruit. He has one of the rarest abilities in the entire series and this allows him to transform into a huge blue flames phoenix.

His immense power places him second on this list.

He is the strongest Yonko Commander in the anime. He is Shank’s first mate and a member of the Red Hair Pirates. His esteemed position can prove he is incredibly powerful.

He made Kiaru stop in his tracks just by his mere presence in the Marineford arc. Benn Beckman is said to be almost as strong as Shanks. He is incredibly strong in terms of physical combat.

All this is claimed in the One Piece: Vivre Card Databook”. He has the highest IQ of any character that was introduced in the East Blue Saga and he is also a knowledgeable man.

Ben’s powers are still mysterious but his position as Yonko’s first mate is enough to name him the strongest commander in One Piece.