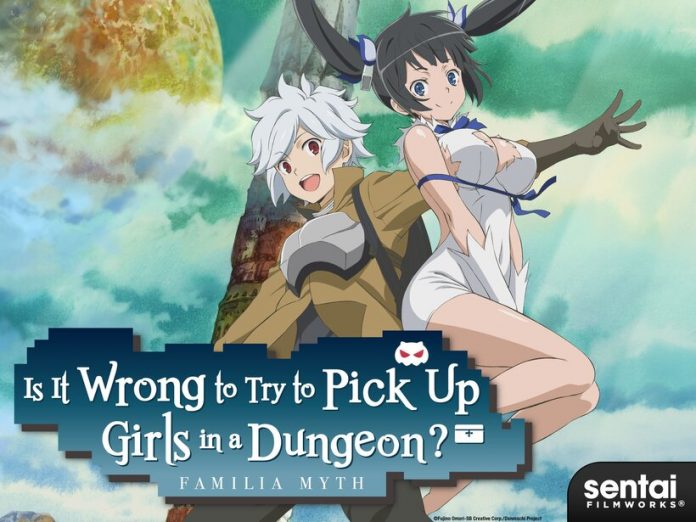 This is something different from the regular battle-oriented anime series. DanMachi kills it with its unique title, exceptional story line, and an amazing set of characters.

This series is adapted from light novels. The perfect combination of funny, fierce battles, seriousness, and strong characters makes DanMachi an incredibly entertaining series of the year.

When we say battle the first thought that comes to mind is who is the strongest? So, here is a list of DanMachi’s Top 10 Strongest Characters.

A half-man and the half-rhino creature is Asterius. He is also called the “Black Rhinos Xenos” as he is a terrorizing Minotaur with a height of 2-meters.

He also has red horns and fibrous arms. All this makes his appearance intimidating.

Asterius is a character who always wants to fight and this love for battle makes him enriches his strength and fighting abilities.

Along with his tight body he owns an axed-shaped weapon which is also a lightning magic sword.

Revis is a tamer ‘creature’ girl who is an immensely skilled fighter. She fears nothing and has a redhead and is serving Enyo right now.

Possessing a cold personality does not keep her from thinking that she is just a tool for her employer and nothing more than that.

Though she is loyal, blindly following her master’s orders is not something she does, this is proved when she refuses to face the Loki Familia. As she is a creature, she can target any kind of monster.

Her strength comes from eating magic stones, plus she can also control Demi Spirits. But the only drawback is that she losses control over the creatures if her voice doesn’t reach them.

The strongest one in the Loki Familia- Ais Wallenstein. She is an ace executive, strong warrior, and a First-Class Adventurer.

There is literally no way and in front of no person that this girl would let her guard down.

“Ariel” is her power move and for this, she has to manipulate wind elemental enchant magic. These wounds help her create fortresses of wind and also shields for defense.

Ais has one more magical power called the “Avenger”. This power helps her to fight against reptile monsters. This name “Avengers” is given because the power enhances more of Ais hates more.

Ottar aka the “Knight of Knights” is the Freya Familia’s Level 7 captain. He is a humanoid beast. He has a human heart that possesses a beast body. This means that he was not a beast from the starting.

Freya was the one who helped him when he was left dying on the streets. Because of this gesture, Ottrar will always be grateful to her.

The ice queen and a powerful mage Alfia. She seems like a quiet and calm person but actually, she is surviving through an incurable disease from her birth time.

This is because if she isn’t able to do the chant she would lose control over her magical powers.

Whereas “Satanas Verion” is a heavy mechanism including shock waves and sound blasts. Surprisingly, Alfia was only 16 years old when she fought against One-Eyed Black Dragon (OEBD).

Zeus Familia’s Level 8 Captain- Maxim. There was this whole talk that he died after fighting the OEBD. But no, he did not die. In fact, his defeat brought in the rumors of the death of The Empress.

The defeat Maxim faced paved the way for the future generation in the DanMachi universe.

If you notice Maxim is barely mentioned in the series or in the light novel. He was mentioned the first time in the Astrea Record Extra Story.

She possesses the personality and facial features of the goddess Hera. Gorgeous yet arrogant!

Currently, none of us know The Empress’s real identity but she was named legend the very time she defeated OEBD 15 years ago.

This means that she won against the OEBD before the series started, so there is no hard proof.

If this battle happened 15 years ago and The Empress and Maxim fought together, we need to know if The Empress overpowered Maxim or was he on the forefront.

Anyways, if she has fought the dragon her battle strategies must have been brilliant and it must have taken an immense amount of strength to defeat the dragon.

The huge flesh-eating monster – Zald. He is able to do so with his Deus Ambrosia ability.

There is a scene where he eats the Behemoth monster and gets more power to fight in the battlefield without any regard to how difficult the fight could be.

His technique is to swallow his opponent and search for new fields to gain stamina and power.

As strong as Zald may seem, he is a broken, disillusioned, and exhausted character who has lost purpose.

The time when Familia didn’t emerge victoriously and his captain died, he lost everything, purpose, and motivation.

The second strongest character in the series is Albert Waldstein. Even though we all weep for his demise after fighting the OEBD, you never know he may come back.

Albert is a pro at swordsmanship and it is his major power. He has been awarded the title “Sword Champion”.

A popular character among the fans because he used the “Power of a Contract” to seal the dungeon even before the series began.

The strongest character in DanMachi is One-Eyed Black Dragon (OEBD). For now, no one knows OEBD’s real identity but we know that OEBD is an all-knowing deity.

OEBD is not a superior character, it is an irregular character. Judging from the series, OEBD is the “final great calamity” and this is not something good.

Apart from this we also see that OEBD desires to become the “big bad” in the DanMachi universe. It could be anything from Monster Rex to Odin. All we can do is wait.