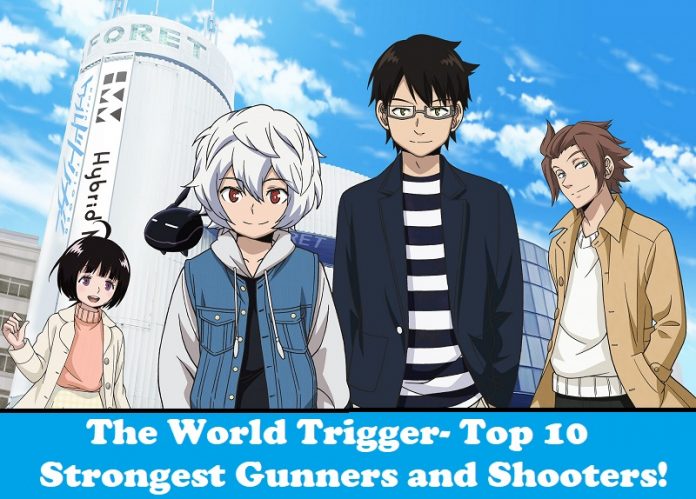 One of the coolest classes in the World Trigger is the Shooter Class.

The Shooter Class has many variations and one of the sub types is Gunners. Though the Shooters were established first by the borders, Gunners is now a part of it.

Being Shooters and Gunners these people are strong and immensely powerful. So, we analyzed all the characters in this class and made a list of the Top 10 Strongest Gunners and Shooters In The World Trigger.

There isn’t much information about Kazuma, but we know that he is the No.1 Gunner in the Border. He is also a member of the Kasukabe unit and this unit is a bit strange because their leader is an Operator.

While the B rank war was going on Kazuma was on the duty of recruiting members so we couldn’t see much of him.

Different people have mixed thoughts about Miwa’s character. This is because of his character motives and deep rooted hatred for the Neighbors.

He is shown as an A-ranker emo boy but he was also a Border agent in a Gakuran and played a small antagonistic role in the series.

Miwa was a Fujin candidate and employed it in the Aftokrator invasion arc. He did this by creating six ribbons. Lead bullets are a beneficial tool for him as he is efficient in fighting in a close range.

He uses these to deliberately slow down the enemy because moving around them with each lead bullet weighing 100kg is a tough task.

Miwa possesses the power to cause harm to Hairein and Mira who are black trigger users and Aftokrator invaders. His battle techniques and strategies are far more superior than anybody.

Rei is the perfect fit for a leader role as she is calm, composed and a dependable shoulder. Her resolve and fighting skills are par perfection. Even though her real body is sickly and frail, her teammates respect and adore her.

Her personality is the kind which attracts people.

Shooters are perceived to be the support system of a team but with Rei the case is the other way round.

Rei is the face of her unit. Apart from Izumi, Rei is that individual who possesses the ability to customize Viper’s trajectory.

The real fighter in the battle field is Rei. She uses the whole surroundings and simultaneously predicts her enemy’s moves.

Mitsuru is the one we know walking around with his poker face. Even if you throw a live spider at his face, he would probably just shake it off and walk ahead.

He is a calm minded guy and this quality works in his favor whenever he has to save himself.

On the battle ground he prefers to be in control and is a flexible fighter.

His quiet and tranquil personality helps him act quick; he was the one who saved Kitora from Izumi’s attack.

Kako is a candidate for Fujin and the leader of the A-rank Kako team.

She is crazy obsessed with the alphabet ‘K’, this why all her teammate’s surnames start with K and she also aspires to recruit Yuma Kuga for his skills and the other obvious reason.

She is a person who gives her job the utmost priority even though usually she is an even-tempered girl. She is a trained shooter but is also skilled in using the Scorpion Trigger.

Her predictions are mostly accurate as she has the ability to sense her enemy’s next move.

Kyosuke is an extremely powerful individual but he is also the member of the strongest unit in the Border. Apart from that, he loves teasing and fooling around with Konami.

While Escudo was fighting with the Neighbors, he used Viper and Asteroids attack. Osamu is his current disciple and before that Ai Kitora was also one of his disciples.

As they both were trained by Kyosuke and Kitora had to leave because of Osamu, both of them have a strong rivalry. Kyosuke is the one who can destroy Rabbit on his own where to defeat a Rabbit at least a team of 4-5 A-rankers is required.

Jun is the character who would be a hero in a typical isekai anime. The Arashiyama unit has been undervalued on many instances, but there is a reason that Jun is Border’s face. He has constantly been proving people wrong.

Jun is an A-rank team leader and one of the candidates for Fujin. An un-defeatable pair is Jun and Mitsuru, especially when Jun uses Asteroid. Osamu advised Kyosuke to take training from Jun as his techniques are superior in terms of shooting.

Reiji is the Perfect All-Rounder because he is way too overpowered. His expertise in using any type of trigger is commendable because he uses it to its utmost value. He is like the elder brother we all want.

It is also calculated that each of his triggers has more than 6000 Usage Points on an average.

He is Tamakoma First’s Leader and Border’s Strongest Unit. Reiji has the power of an entire unit and it is an obvious fact that his whole team are A rankers. Cool fact – He owns a specialized Trigger Holder in which he can hold 14 triggers at a time.

He is also known for combining these triggers and attacking his enemy in unpredictable ways. With his defensive power and analytical skills, he is able to predict the opponent’s move and turn the situation to his favor.

This is an everlasting debate of who is stronger, Izumi or Ninomiya. Somehow, we have come to a conclusion by giving Izumi the 2nd position.

This is because of some less Trion level points and Usage points than Ninomiya. Although, Ninomiya did plead Izumi to train him and this proves that Izumi’s skills and techniques are extraordinary.

The World Trigger is a series filled with strong and weird traits. Izumi is the one who caused destruction in an entire area with his Meteor. He is also the one who is crazy enough to lure Jun out.

His strategies and flexibility during battles prove his intelligence and ability to adapt in any given situation. Even the Aftokrator team’s captain, Hairein wanted Izumi to be his subordinate.

Border’s best shooter and overall No.2 fighter is Ninomiya Masataka. He was a former A-rank team leader and his leadership skills are preeminent. Ninomiya prefers to fight alone and relies on his team members for defense.

His charismatic personality and bad-boy image are the reasons that his Trion Body takes the form of a Host Persona. He would have been the Border’s Golden Bird of Chika wouldn’t have been in the picture.

In his Overall Border Briefing File, his trion level is 14, parameters sum up to 62 points which also includes attack power that is 12. Ninomiya possesses the strength to overpower all his opponents alone.

He steals the march on his enemies by trapping them from all sides. He does this by dividing his trion cubes into large and small bullets.