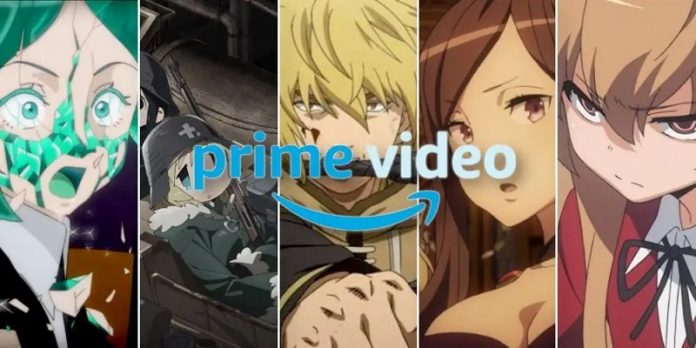 In the anime world, action genre is the most renowned one. The action genre is widely appealing because of the dynamic animation and its sync with the sound. This genre has always been in the limelight. Though Amazon Prime doesn’t have many anime, but from the ones which  are available, there are a few action anime series which are worth it.

Without any further ado, here is a list of the 10 Must Watch Action Anime Available on Amazon Prime!

This series is about the battle that takes place between the creators and the ones created. The protagonist Souta Mizushino desires to build his own world by a light novel. Strangely, one day while watching an anime he gets transported into the anime in the battle scene he was watching.

However, when he returned he is accompanied by the heroine of the anime- Selesia Yupitillia. Soon enough other characters from the anime start appearing but there is this one mysterious character whose name we do not know.

Elfen Lied is a series which brings out the cruel reality of human psychology. Lucy is a special human breed called “Diclonius”, who is the victim of the inhuman scientific experiments that are being led by the government.

As a reaction of this long torture, Lucy unleashes bloodshed in rage. Somehow she escapes the country but gets a serious head injury which causes a split personality disorder. Further in the story she meets Kouta and Yuka who give her shelter but what did they know about her murderous tendencies.

Lupin the Third is a classic detective story with the combination of a cunning thief.

The protagonist Arsene Lupin is a wanted high-profile thief all across the world. His grandson Arsene Lupin III carries forward his disrepute.

Apart from the crime branches and other rival criminals, there is one person who is consistently chasing Lupin III and that is Inspector Zenigata of the ICPO. The only woman in Lupin III’s life is Fujiko Mine. But for some reason he is not able to figure out whether she is an ally or an enemy. With the partnership of his friend Daisuke Jigen he sets out to conquer the world.

Kenichi: The Mightiest disciple is a story that shows that anyone can cross limits to save their loved ones. The protagonist Kenichi Shirahama decides to take admission in the Karate club to be strong.

After he joins, he faced a bullying senior and when he is almost on the verge of giving up, he falls for a new classmate named Miu Furinji. And from then onward he begins to train intensely.

Once he defeats the senior, a group named Ragnarok  chases for him. Kenichi learns various martial arts to protect his loved ones.

Inuyashiki: Last Hero is a story that proves the fact that age is just a number. The protagonist Ichiro Inuyashiki is a 58-year-old man who is living a difficult life because of the differences he has with his family and a serious back problem.

Early in the story we see that he is diagnosed with stomach cancer and is left with only 3 months more to live. Hearing this he breaks down into pieces. But one day while he was on a walk with his dog a strange smoke suddenly covers him and the next minute he knows that he has been rejuvenated as a mechanical weapon and thus begins his new life.

5. Kabaneri of the Iron Fortress

The alternative version of Attack on Titan is Kabaneri of the Iron Fortress.

The series shows Kabane who are human-eating monsters  which have originated from a mysterious virus that came during the Industrial Revolution. The only way to destroy these monsters is by smashing their steel-coated hearts.

Over the years, people have survived by creating a wall around their habitation and the only way to enter it is through a heavily armored train which can go right through their hearts. The protagonist of the series is Ikoma who is a young man who desires to fight the monsters with those trains.

4. Blade of the Immortal

Blade of Immortals is a story which shows how humans exterminate each other to gain supremacy. The protagonist Manji is a swordsman who has been given the immortality curse by a witch. Manji eventually gets tired of all the death he has caused and made an attempt to regain his mortality by murdering hundred evil men for each of the hundred good men he had killed.

3. Land of the Lustrous

Land of the Lustrous is a story about finding your weakness and overcoming it. There are six meteors which have destroyed the world. This world is currently the land of Gems, crystalline organisms. Lunarians are constantly attacking the gems because they want to capture the gems and use them as body decorations.

The protagonist, Phos is such a gem who cannot fight a war and is asked to collect an encyclopedia. Further in the story he meets Cinnabar, an intelligent gem, dismissed from duty. After recognizing the struggles of the rejected gems, Phos decides to make something for these gems.

Banana Fish is the story of an escapee showing his difficult life. Aslan Jade Callenreese, known as Ash Lynx ranaway from his house and was raised by the mafia Dino Golzine. Ash sets out to investigate about a drug called  “Banana Fish” with his friends Shunichi and Eiji but somehow Dino finds them and his men capture Ash’s two friends.

Now Ash has to find a way to rescue  his friends and also investigate “Banana Fish.”

Dororo is an emotional bloodshed story. Lord Daigo Kagemitsu is a greedy man for power and to do so he created a pack of 12 demons. This pack is formed in exchange of the organs and limbs of his first born son.

The child was still alive after this cruelty but was disposed of into the river. Somehow he is saved by a medicine man. This man gave him prosthetics and weapons for survival. In order to get his body back to a normal condition Hyakkimaru has to kill the demons who have his organs and limbs. After many years of wandering, Hyakkimaru meets an orphan child named Dororo. They both become friends and set out to kill all the demons.