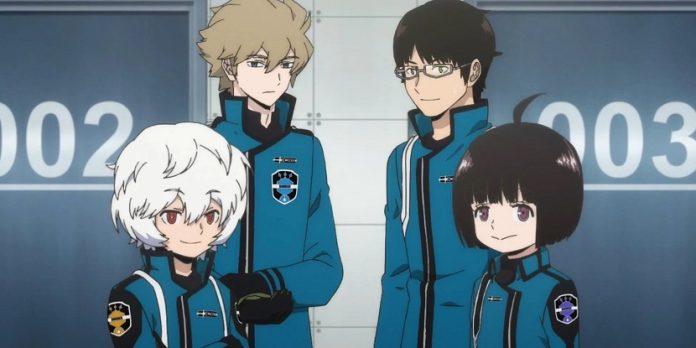 Every attack and attacker is different. We enjoy watching these attackers because each individual has a different attack technique which results in variation in the probability of winning.

Also, we all enjoy a good battle, so we decided to make a list of the 10 Strongest Attackers in World Trigger!

Yousuke is a part of an elite A-ranker team; he is an extremely talented individual who is self-taught. He can wield two different Attacker triggers, Kogetsu and Scorpion and has achieved mastery at using them.

Throughout the Large scale invasion arc, Yousuke survived until the end while battling trion soldiers and humanoid Neighbors; his fight with Lamvanein is unforgettable because of the attack scenes and majorly due to their constant screaming facing each other for a minute.

Yousuke’s trion level is comparatively lower, but he backs it up with his other abilities, especially his analysis and observant personality comes in handy in battles.

His agile and quick movements, combined with his usual distant fighting style, prevent him from surprise attacks from his enemies.

Well, Ikoma is pretty weird, but still, he is sort of cute at the same time. He probably thinks he is in an episode of ‘The Office.’

He continually looks for the camera to click photos and record videos; in the manga, it gets even better when he directly talks to readers.

Most of the time, Ikoma engages in random gossips at the time of discussing important events, explaining he’s an airhead sort or he simply doesn’t care.

Still, he becomes serious during the actual battle creating a gap within his personality which is very interesting.

Ikoma is the unit’s leader and the ace; he has also earned the No. 6 Attacker title.

He tends to fight long-distance despite being an Attacker; Jin claims he is the most efficient Senku user.

He could defeat Yuma by overcoming Chika’s bullets and all sorts of defense by Border Triggers and environmental barriers.

Ko is your typical knight character; he is a diligent, loyal and sincere good guy. Ko’s side-effect, enhanced sleep-learning, works as a cheat skill, but he has a complex about it; however, now he is slowly coming to terms with it and using it to his advantage.

His Side-Effect enables him to learn 100% skills of his opponents that he has experienced while sleeping; it has helped him climb the No. 4 Attacker position.

Although his side-effect is incredible in itself, Ko is inherently strong and perceptive, and his defense is hard to crack even for Hyuse and Yuma combined.

Ko’s swordsmanship is incredible; it shocked Konami when Ko defeated Yuma in the B rank wars; even in the Large scale invasion arc, he alone stalled three Rabbits.

He played an essential part in the Galopoula’s attack as Ko stopped Gatlin from destroying Border’s away ship twice.

Soya is the No. 2 Attacker and the leader of an A-ranked unit. He is a good leader and, in general, a nice person even if he is harsh towards people at times, but he means well.

Unlike others, he never acts on his impulses; Soya is what you would term a Kuudere.

He is always misunderstood as a child because of his height, but he doesn’t seem to mind it.

According to Jin, he has a secret side to him; in reality, he is childish, Soya is caught riding Raijinmaru on camera.

Soya has scored the highest usage point for Scorpion, and he is capable enough to fight a Black Trigger user.

Due to his agile and flexible body, he excels at hit-and-run, and when his attacks are combined with stealth combat, he becomes an exceptional fighter.

Konami is the best girl, and she is too cute to be true. Konami is the type of tsundere that you would want to keep inside your pockets, and it is hilarious how she is so gullible to be tricked again and again.

As a member of Border’s strongest unit, Tamakoma first she also possesses a personalized trigger called Sogetsu. The Connector helps Konami to merge two Sogetsu into a big Axe that focuses on firepower.

Although she is naive about social skills, Konami is perceptive; she could identify Yuma as powerful and that Viza’s trigger is not typical.

She is Border’s No. 3 Attacker; however, Konami is stronger than Kazama since she didn’t participate in solo rank wars for many years.

During the battle, Reiji and Kyosuke let her run on a rampage while handling everything behind the scenes; Konami is like a beast.

She is Yuma’s mentor, and despite his previous experiences, Yuma could not win against her more than three times in training battles.

Tachikawa is a monster! He is Border’s No. 1 Attacker and overall agent with a few screws loose in his head. He is the exact representation of Jin’s extreme version; he is reckless and impulsive at times.

Tachikawa would probably laugh like a maniac while slashing through his enemies with dual-wielded Kogetsu.

It took him one slash to annihilate the self-destructive Ilgar. An entire elite A ranked team is required to destroy a Rabbit, but Tachikawa alone defeated eleven of them; he is crazy overpowered!

Despite his slightly eccentric tendencies, Tachikawa is an intensely focused individual; he generally doesn’t lose his composure in battles.

Tachikawa is swift to analyze the situations and retaliate and is strong enough to be on par with a Black Trigger user.

Shinoda is a member of Border’s board of Directors and the Commander of the Self-Defense Unit. Shinoda has been in the Border ever since it was created, and he respects Yugo Kuga, his senpai.

Shinoda is Tachikawa’s mentor, so he is undoubtedly stronger than the No. 1 Attacker; he is Border’s most powerful agent with a Normal Trigger. Shinoda’s strength compares to the whole team, and he doesn’t participate in battle unless necessary.

Shinoda’s overall parameters are 62! To reach faster to the simulation VR room, he ran on the wall like a ninja. He has more battle experience than others; we can observe his intelligence and tactical sense in the fight with Enedra.

Yuma is one of the main characters in World Trigger, and fans adore him for his cute and laid back characteristics.

Yuma has proven that even while using Normal Triggers, his powers are close to A-rankers and with his Black trigger and Replica as a support, he is a complete game-changer.

Yuma is a Neighbor, and he has battle experience since he participated in the Neighbors’ civil wars.

As he was specially trained by Yugo Kuga, who was as strong as the current Shinoda 10 years ago, his battle strategies and hand-to-hand combat techniques are excellent.

Yuma’s Black Trigger is extraordinary; it stores his original body inside a ring while creating an artificial trion body that can regenerate.

It can produce various seals and combinations that can enhance his physical abilities, and it can also copy others’ skills, just like when Yuma copied Miwa’s Lead Bullets.

With Replica’s help, Yuma’s seal production becomes faster, and his strategies refine greatly. Yuma’s inner overpowered protagonist self was evident in the fight with Viza; he defeated him and Aftokrator’s national treasure Organon.

According to the Border Directors, Amo is considered the Border’s last resort and is a walking nuclear weapon. His trion body is supposedly grotesque, and his personality changes when he fights.

Unfortunately, we didn’t see him in a fight, but he single-handedly wiped out an entire region filled with various trion soldiers. Amo is an All-Rounder and a Black Trigger user, and we can assume that its power range is a large scale one.

Katsumi Karasawa mentions he has slight personality issues, and his Side-Effect contributes to this problem. He can see combatant powers as colors around people, and different colors indicate strength levels.

Due to everyone’s description of him by members in Border, seeing him fight will be fun.

Jin had to be included in this list because he is too overpowered and superior with his black trigger. Literally everyone has a crush on him and his charismatic personality is intimidating and overwhelming.

He is a calm and relaxed person who only cares about his rice crackers and is Border’s best agent to fight against the Neighbors.

Jin was a former S ranker and his strategies are brilliant.

As a former S ranker, Jin’s strategies are top-notch; he alone was powerful enough to beat Border’s top agents with his traps and tactics during the Black Trigger retrieval arc, and he wasn’t even serious while fighting.

When he was using Kogetsu, he was the No. 2 attacker, but since he designed Scorpion, his matches with Tachikawa ended up with a tie.

He can produce eleven ribbons from his fujin that can slash through objects within his vision.

Jin’s Side-effect overthrows the power scale, and he becomes almost invincible. Like, come on, the dude can see the future!

It changes everything in so many ways; although he can only see a few years in the future, he can also see the variables that can change a future event’s probability.

He has often used it to his advantage; Jin manipulated the entire Aftokrator invasion, resulting in Border’s victory.