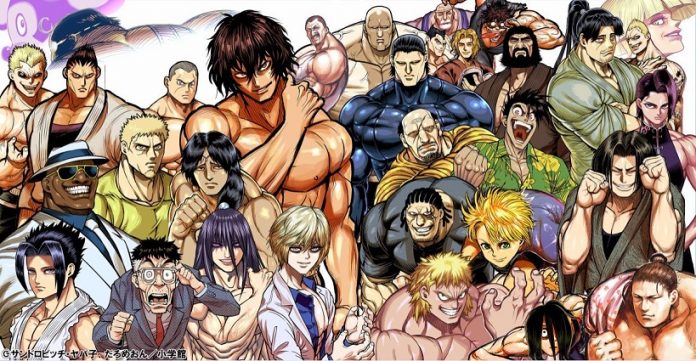 Kengan Ashura is another feather in the cap for action genre anime/manga. This series has introduced us to insanely strong fighters who use unimaginable and out-of-the-box fighting techniques.

The series is a compilation of scenes and characters you and I could never even dream of.

Nevertheless, the series is not all about violence. It skillfully portrays the back story and motivation of each of the fighters.

Their ideologies and circumstances have been beautifully elaborated to help the audience understand the urges that compel them to push their limits.

So, here is a list of the 10 Best Kengan Fighters in the show.

*This list is created on basis of the events that happened till Kengan Omega Chapter 96.

‘The Lighting God’ aka Mikazuchi Rei is without a doubt the fastest fighter of them all. He belongs to the not-so-famous Mikazuchi clan and is the master of the Raishin Style.

He is a pro at many fighting techniques and each attack is surprisingly accurate. An ace assassin is expected to be like Rei.

Rei was an all-in fighter who mostly killed his opponent but when he fell for Kurayoshi Rino, he had a change of heart.

He decided to not kill anyone anymore and adopted techniques that did not end in his opponent’s dying. The shortest match on record was fought by Rei in which he killed his enemy in a split second.

Yes, Speed is an important factor but for this, he had a trump card.

Rei had the ability to combine his Raishin style with Kurayoshi Rino’s suggestions and with this, he can get stronger more than anyone would have ever seen.

Julius Reinhold, also called a self-made ‘Monster,’ from Germany. During the Kengan Annihilation Tournament, the whole Toyo Electric Power Co was dependent on him. He is the fighter who has taken so many steroids that he can effortlessly kill an average person.

The combination of his strong muscles and monumental power helped him stand equal against someone as strong as Wakatsuki. Julius also had the ability to win that fight if Wakatsuki didn’t have that surprise kick.

Nonetheless, Julius is not someone who completely depends on force, he is a fighter with excellent physiology, sports medicine, psychology, and even physics knowledge.

The most twisted character in the series so far is Kiryu Setsuna, also known as “The Beautiful Beast”. His life had always been complex and intertwined with Ohma and his obsession for Ohma is the most cringe thing in screen.

Keeping aside uncomfortable behavior, when it comes to fighting he is an unwavering and acrobatic fighter. His fighting style is the forgotten Koei Style which he learned from his master Taira Genzan.

There is no more proof needed to know that Kiryu is psychotic after he killed his own master after perfecting the Koei Style.

He possesses the ability to disappear in a blink of an eye and rip his opponent by combining ‘Blink; and ‘Rakshasha’s Palm’.

Hatsume Sen, also known as the “The Floating Cloud,” is a carefree and calm person just like a floating cloud but he is also the most unforeseeable fighter. He can be peaceful as a cloud but can also strike lightning if required.

In every battle, Hatsume’s strength and fighting power vary according to his mood. On his bad days, even an average fighter can beat him, but on his great days, he is strong enough to fight at par with the Fang.

His fighting style is the Hatsumi-Style Aikido which allows him to bring down the opponent easily.

However, for a do-or-die situation, he has his ultimate move called Stardrop.

The ‘White Tiger’ is  Wakatsuki Takeshi who was born a monster. Now, Takeshi has a very unique physical condition in which his muscle fibers are 52 times denser than other fighters.

He has a lot of battle experience that gives him an advantage over his opponent. He is always a step ahead of his enemies in the battle. A total of 310 Kengan matches where only 3 matches were lost, is Takeshi’s record.

He possesses immense powers and abilities with the combination of tolerance and psychotic strength. He also created a new move called the ‘Blast Core’. This was his trump card against Kagoh Agito.

In this technique, the opponent’s muscles are squeezed to a certain level and then release all the muscles at the same time.

Raian Kure, also known as ‘the Devil,’ is a merciless and non-ethical person.

His title perfectly suits him as he doesn’t even have a sliver of humanity. He belongs to the not-so-famous assassin family.

I know you all must be thinking what is someone, who lost in the second round doing here in the list, that too at the fifth position. Just a kind reminder, that during that fight he did not use his Kure techniques.

Once he unleashes those, there is no who has that slightest chance to win over him or even stand before him. This Kure techniques gives Raian the power to break the limits his brain has over his muscles.

This makes him a raw devil. Furthermore, he is always careless and consumed by the intention to kill. So anyone fighting against him is for sure in high risk of loosing their life.

The Thai God of War who is responsible for the safety of Rama XIII and is a renowned boxer. Goalang is a skilled fighter famous for fast flicker jabs and punches that can effortlessly make the opponent unconscious.

Aside from boxing he has expert training in muay Thai for more than 20 years. The combination of boxing and muay Thai techniques raises him to an unparallel level.

At one point even Kanoh Agito confessed that fighting against Gaolang isn’t easy and transcending through his blows is almost impossible. This is because of Gaolang’s unbreakable defense and tolerance.

The protagonist of the Kengan Ashura ranks third in this list. Also known as ‘Ashura’ of the Kengan Association. He was the person who won consecutive matches until he faced Kuroki Gensai who is a big hurdle.

Ohma’s speed and forbearance is superior to any average human, but it is the same with anyone on this list.

So what is the thing that sets Ohma’s apart? His martial-arts, presence of mind and his trump card move, these are the factors that make him different and superior to the others in this list.

He uses the Niko style which consists of many complex techniques and this is pure advantage for him. With this style Ohma possesses the ability to harden any part of his body for attack or defense.

He is also a master of the ‘flow of power’ which gives him the ability to use the attacker’s power against them.

Kanoh Agito, the Fifth Fang of Metsudo is taken as the King of Kengan Matches. If he wouldn’t have been defeated by Kuroki Gensai, he was surely to be placed on top. He is an all-rounder with unparalleled physical stature.

His adaptability is his strength that empowers him to adjust in any fighting environment and style.

Kanoh has to get familiar with his opponent and then he makes his own fighting styles for that particular fighter. He constantly refine and enriches his techniques of fighting and this makes him the most dangerous opponent.

While fighting Niko constantly transits between orthodox Niko Style to unorthodox Formless Style. This makes it very difficult for his opponent to predict his moves.

Kuroki Gensai, the ‘Devil Lance,’ is the only fighter Kenganverse who has never been defeated.

This is why he deserves the top position. He has defeated the Fang in the semi-final, plus had enough strength to win the final round.

The Saitama of the Kenganverse is Kuroki and all the others on this list wish to defeat him, which we all know is impossible.

He is the expert of the Kaiwan Style and he has modified his fingers in such a way that it can even pierce solid steel.

There is no tragic back story but he just had the urge to push his limits and achieve the best.