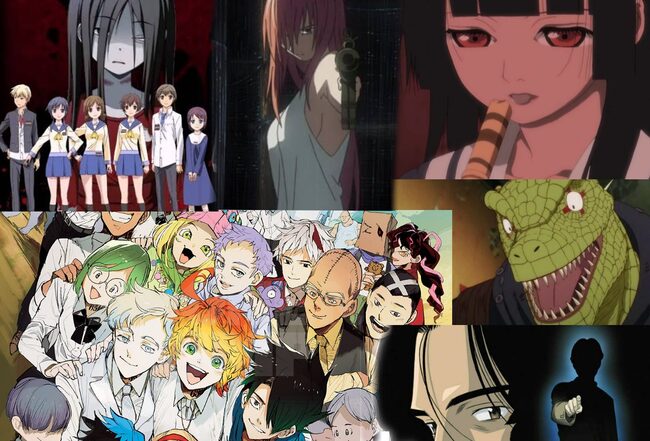 Not everyone enjoys the horror genre. Watching them with those who love them is the worst for some. It’s not a pleasant experience. Others, however, cherish this genre.

A chill runs down your spine, a jump scare makes your heart pound, it feels surreal. We’ve compiled a list of 10 horror anime shows for horror fanatics.

Recent anime series weren’t well-received by Netflix fans, putting Netflix in a difficult spot. Netflix-original Devilman Crybaby has only 10 episodes, and it is totally mind-bending. Akira, a crybaby, appears as the main character in this horror-action anime.

In Sabbath, he and his best friend Ryou search for traces of devils. Akira becomes a Devilman after merging with Amon in an effort to save his friend.

Akira, who has the body of a devil but the heart of a baby, fights alongside Ryou to destroy tyrants who harm humanity and those he loves.

Another victim of the No-Second-Season disease is Deadman Wonderland. However, that doesn’t mean it’s a bad anime. The anime, Deadman Wonderland, is the story of a high school student accused of massacring his classmates.

As a result of his conviction, he is imprisoned in a prison amusement park, Deadman Wonderland, which is filled with sadistic inmates. Aside from defending his life, he must find the red-man, the true culprit.

8. HighSchool of the Dead

He then ran away with his girlfriend, discovering society had already collapsed. In order to survive, they must join forces with others. There is a lot of fanservice in the anime Highschool of the Dead, which might annoy some people.

This anime is 13 episodes long and is a psychological horror show. The short and sweet horror anime is an excellent recommendation if you’re in the mood for something entertaining.

Lucy, who has invisible telekinetic hands and horns, is the central character in Elfen Lied. As a result of government experimentation, she suffered a head injury during her escape, which left her with a split personality.

Her care is taken by two college students who become entangled in the world of government and conspiracy.

Recent years have seen Monster anime become quite popular after 15 years of debut. The character development and excellent plot definitely deserve the respect they are given. You’ll be faced with the thought of questioning man’s psychological thoughts after watching Monster.

The anime follows the story of Kenzou Tenma, a surgeon who decides to save a child’s life over that of a mayor. Tenma’s life is turned upside down when the saved child becomes a serial killer. His guilt increases with every murder. He must kill the monster he saved himself, weighed down by guilt as a result of so many deaths.

Have you ever felt your school was haunted? If so, watch Another. You will be filled with uncertainty about your school after watching this great horror-thriller anime. Another anime follows Kouichi Sakakibara, who transfers into Yomiyama North classes 3-3. An odd connection occurs between him and a girl named Mei while he is there.

Yet, everyone treats her like she isn’t there. As Kouichi, Mei, and their classmates are torn apart by a series of tragic incidents – but uncovering the horror of Yomiyama may cost them everything.

If The Promised Neverland had a strong sequel, it would have made for a brilliant horror anime. The second season of The Promised Neverland, however, was an utter disappointment. This horror mystery anime takes place in an idyllic-looking orphanage. It looks as though every aspect of the house, including the food and caring Mama, is peaceful and loving.

The eldest three children, however, intend to flee from there, in order to save their whole family after learning the horrific truth about the orphanage. Still, they must save themselves and their families from Mama.

A fantastic anime with fantastic character development, Parasyte is one of my favorites. The action scenes are great, and the characters are memorable. It is only the art style that is a little bit demotivating, everything else is fantastic.

This 24-episode-long horror anime follows the adventures of high school student Shinichi Izumi, who becomes a victim of a strange parasite that seeks to take over humans’ brains.

After he kept it from engulfing his brain, IT eventually resorted to living in his right hand. As a result of this, the duo has no choice but to work together to survive.

Parasyte is a psychological thriller that makes you think about the possibility of the existence of unknown creatures. If they invaded the earth, then what would they do?

If Tokyo Ghoul had been adapted correctly, it would have been a much better anime. The non-canon nature of Season 2 led to its failure. Anime Tokyo Ghoul is a 4-season action-horror show you’ll surely enjoy.

In Tokyo Ghoul, a shy boy named Ken Kaneki’s date night goes horribly wrong when he meets a human-eating Ghoul he didn’t expect. His life was saved miraculously when some beams fell on her.

Her organs were transferred to Kaneki so he would not die, making him a one-eyed Ghoul. Kaneki now needs to find a place to fit in between Human and Ghoul society.

There is no doubt that Attack on Titan is the best horror anime you will ever watch. It will give you chills watching the Titans devour Humans ruthlessly. Meanwhile, the series will captivate you with its plot and brilliant worldbuilding.

The story centers on humanity fighting the titans. Humanity battling titans. The inclusion of anything else will be a huge spoiler for you, destroying this masterpiece. Currently, Attack on Titan Season 4 Part 2 will air during Winter 2022.