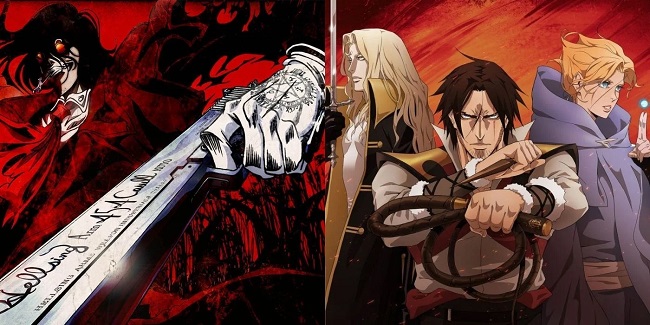 Vampire animes are one of the most popular and demanded animes in the world of anime and manga with a multitude of genres. Many anime series in this genre have been created and the number keeps steadily growing since people enjoy stories featuring bloodthirsty mythical creatures.

It is about an orphan girl Fuyumi who enters the demon world through a portal and meets the main character, Staz, a vampire from the demon world. Tragically, Fuyumi is turned into a ghost when she is killed by a carnivorous plant.

In this tale, Staz promises to bring her back to life while other characters in the underworld add further twists to the story. Anime has a generous dose of humor and emotions, and it is a really enjoyable show to watch.

Known as one of the most popular vampire anime, Rosario to Vampire tells the story of Tsukune, a young teenage boy unable to enroll in a high school due to his poor grades, who is finally accepted by a local high school. When he becomes best friends with the beautiful vampire girl named Moka Akashiya, he discovers that it is a boarding school for monsters.

Soon, Moka becomes obsessive about Tsukune’s blood and accompanies him most of the time. Moka turns into a completely different personality when Tsukune removes the ‘Rosario’ from her neck during a school fight. With 13 episodes, the anime combines humor with a fun storyline. It’s one of the best harem anime as well.

It follows the story of a group of vampire hunters called Jaegers, who also have a little ‘Sirius’ boy named Yuliy that is a member of this group.

The werewolf Yuliy is a victim of vampires who destroyed his country of origin. It tells the story of a group of vampires fleeing to Japan from China in the 1930s.

A great combination of fighting scenes and a good plot line make this 12-episode anime appealing and fun to watch.

Fans enjoy horror films because they offer a thrilling experience that gives them goose bumps. In addition to horror films, anime also offers breath-taking experiences. An unusual family moves into a small village named Sotaba and soon after mysterious deaths start to occur.

The director at the village’s only hospital, Toshio, investigates the unexpected deaths and finds that the vampires, also known as Shikis, are to blame. “Shiki” has 24 super exciting and spooky episodes, so it is ideal for fans of horror anime.

Cross Academy headmaster Kaien Cross’s adopted daughter, Yuki Cross, plays the main role in the show. Ten years before, Kaname Kuran, a pureblood vampire, had saved her from an attack by a rogue vampire. With the help of her childhood friend Zero, she has become a protector of the vampire race.

Since the creatures destroyed what was dear to him, Zero does not trust them. Is this all a ruse by the vampires to hide a deeper, darker truth? As a viewer, you want to know what happens in the 26 episodes of this anime.

The elder brother of her hires Marcus to rescue her at the same time. A number of unexpected twists occur as the plot unfolds. A film like this, where you don’t want to miss a moment, deserves to be ranked among the top 5.

Anime-influenced American TV series based on the same-named video game from Japan.

A character named Dracula Vald Tepes summons an army of demons and threatens to use them to overthrow Wallachia after a false allegation of witchcraft causes his wife to be murdered and burned.

An angry Trever Belmont picks up his weapons to fight Dracula.

A magician and Dracula’s son aid him. The series has unlimited action and the animations are super catchy, that you cannot take your eyes off the screen, without mentioning the truly remarkable storyline. The series consists of four seasons and 32 episodes in total.

Vampires, or supernatural forces, that threaten human society are the main reason for Hellsing’s existence. Since the death of her father, Integra Fairbrook Wingates Hellsing has been leading the organization. The plot of the anime is also very extensive, with many twists and turns taking place.

There is a lot of action and intrigue in this story as new secrets are revealed. Everyone should watch the 13-episode anime, and action lovers will enjoy it.

The action and thrill in “Koruzuka” are plentiful throughout this historical, sci-fi anime. Kuro, the protagonist of the story, is on the run to escape his elder brother. Benkei, the servant, helps him escape. While on the run, he meets Kuromitsu, whom he finds attractive.

He soon learns shocking information about her. You’ll have a blast watching it as there are a number of unpredictable twists and turns.

The anime takes place in a post-apocalyptic world where humans and vampires are still at war. There are three main sides to the story where most people want a peaceful existence between humans and vampires but a few want the war to continue out of selfish greed.

Trinity Blood is a hugely different anime in terms of plot and story, but it still has all the thrills and excitement you would expect from a vampire anime. Watch this well-deserving number one anime, packed with action and emotion.

I have listed 1o of the best vampire anime series you must watch. The vampire-themed anime offers a totally different experience to the viewer filled with horror, thrills, and lots of action. These are the best vampire themed shows to start with if you love them or want to try them out. Have fun!