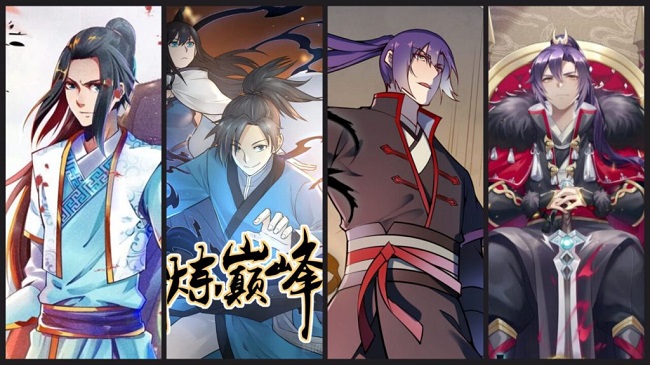 You’ve come to the right place if you’re searching for manga like martial peak. You’re going to read about 10 incredible manga like Martial Peak in this article.

Yang Kai, a boy from a powerful martial family, is the protagonist of the novel Martial Peak.

Everyone dreams of attaining higher cultivation levels as the strength of an individual determines an individual’s value in the martial arts world. As I write this article, there are already 1200 chapters in this manhua.

Let’s look at some manga that are similar to Martial Peak.

10. Return of the Immortal Cultivator

Despite hailing from a powerful family, the protagonist of this manga is from a branch family located in the countryside. When he woke up one morning in the forest, a portal appeared before him, and he got sucked into it.

He returns home and assumes the responsibility of his family, changing his life. The plot is pretty good like Martial Peak. Don’t miss this one!!

In this manga, we are introduced to Ye Ming, the protagonist. He lost both his parents as a child, and his family didn’t act to avenge them.

In an attempt to take revenge on his parents, he began training very hard, but his family destroyed his meridians and once they did so he became a waste, making everyone look down on him.

He was assaulted one day while passing through the road by an old man intent on possessing his body. In the end, he received all the old man’s riches as a reward. In a similar manner to Martial Peak, he transforms his life with the help of these treasures.

In the same way that any martial arts manga has the strong respected and the weak bullied. This manga follows the same pattern. At the beginning, our protagonist is in a country where several have dominance.

The family invested all of its resources in him since he was the son of the head of the household. In spite of all that, he did not show any progress and remained at the same level.

While he was being cursed by everyone, a spirit emerged from his body. His inability to improve in martial arts was due to this spirit. Having been guided by the spirit, he starts his martial arts journey. Like martial peak, it is an entertaining story. You might want to check it out.

A protagonist in martial peak did not even once demonstrate progress in cultivation as in the manga. Despite his family’s support, he was forced to flee the house after a sudden incident occurred. After his brother poisoned his drink, he died.

He gets reborn in another world and trains in medicine but he also dies after that. Having just been poisoned in his former life, he finds himself reborn in his previous life.

His intention is to change everything that’s going to happen in his life after getting a second chance. As a result, he begins to repair his meridians and to train in martial arts.

As in a reincarnation manga, the protagonist lives in a new world after reincarnating. The protagonist had previously been a world-renowned genius. In the whole sect, no one had the capacity to learn what he had.

He was an outsider in the sect, so he had no right to learn all of these things. Since he didn’t have anything to do after learning all there is to know in that world, he gave up.

He is reborn as the son of a blacksmith after dying. Each individual in this world has a spirit, and their value is determined by it. When the MC wakes up he encounters the trash spirit and embarks on a journey.

The main character starts off weak, but because this was his second life, he had the power of memory as his cheat skill. Increasing his strength is his sole goal.

It was only he who lived with his family. His family members were all killed and he spent his childhood alone. He plans to get revenge and save all the people who are still alive using his memories from his past lives.

There are many similarities in the storyline of this cultivation manhua and that of the martial peak. As he continues to train, he is able to achieve greater results and help others with their cultivation as well.

Following the disappearance of his father, Luo Zheng’s family treated him as a slave. On one occasion he somehow managed to find a book his father had left behind. 9 dragons, as well as a cauldron, enter his body after opening that book.

They begin assisting him with his cultivation now. His new life begins as well as he escapes from his family with its help.

It was released simultaneously with another great manga called martial peak. The protagonist in both books starts off as weak and continues to become strong as the story progresses.

An evil brother betrayed this protagonist, and he was killed. After several thousand years, his soul found a new body and he revived. Once he opened his eyes, he felt the need to seek revenge for what had happened to him.

However, since time passed, he was unable to locate them or even find out where his wife was.

With fear and hatred in his heart, he now stands alone in the world. The manhua is new and has fewer chapters than usual because it is so new. The manga is much like martial peak, and I highly recommend checking it out.

This manga focuses mostly on martial arts as its title suggests. The main character of this manga migrated to a martial arts world and took on the body of a cultivator.

His father was the sect leader’s son, and he had a strong spiritual root. Because his cousins thought he was weak, he was always beaten up. However, now that his body has been taken over by the MC, everything has changed. As a result, he becomes a renowned cultivator.

There are a lot of readerships worldwide for this manga like martial peak, which is a popular manga. If you haven’t read it yet, I recommend checking it out.

The protagonist in this manga is from a weak family, just like any other martial arts manga. A chance meeting with the minister’s daughter in the sect saves his life.

Upon returning home to his family, he meets the blue carp fish that will change his life. In his new venture, he enhances his family’s reputation and begins his new adventure in the world.

Similar to the martial peak, this manga/manhua is also very popular. The manga has millions of readers all over the world. It was written by the same author who wrote Tales of Demons and Gods.